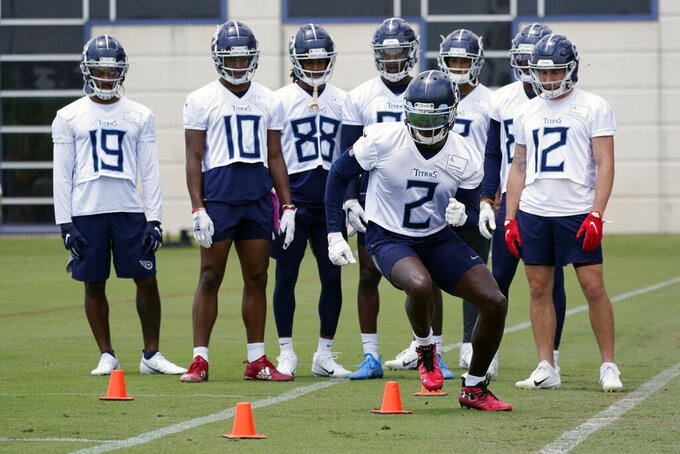 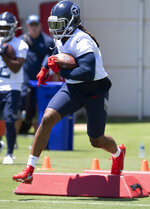 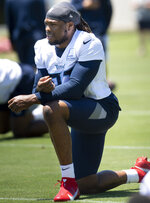 NASHVILLE, Tenn. (AP) — The phrase “Pick your poison” has been used a lot to describe the Tennessee offense since the Titans traded for Julio Jones.

That’s the effect of adding a seven-time Pro Bowl wide receiver to a unit already featuring a Pro Bowl receiver in A.J. Brown and the AP NFL Offensive Player of the Year in Derrick Henry, the back-to-back rushing champ.

The man tasked with distributing the ball is pumping the brakes on the enthusiasm and high expectations.

“A ton of quote unquote potential, but at this point potential doesn't really get you a whole lot," quarterback Ryan Tannehill said. "We have to put in the work and put the time in and ultimately go out and make the plays on Sundays.”

The Titans have ranked among the NFL's best offenses since Tannehill took over as the starting quarterback in October 2019. In 2020, they tied for second in the NFL averaging 396.4 yards a game and fourth scoring 30.7 points a game.

They scored at least 30 points in 10 games, reaching 40 points or more in five.

Now the Titans have Jones, the man with the most yards receiving since entering the NFL in 2011.

“Obviously, you know what he will bring to the table,” Tannehill said. “I’ve seen big things out of him this whole career, so that’s all exciting. But at the end of the day, we have to get on the same page here this year and make sure we’re doing everything we can to go out and make plays on Sunday.”

Tannehill and Jones have worked to make the most of their short time together since the trade was announced June 6. The quarterback threw a career-high 33 touchdown passes last season. Only a nagging hamstring injury in 2020 snapped Jones' streak of six straight seasons with more than 1,300 yards receiving.

Then there's Henry, the fourth man in NFL history to run for at least 1,500 yards and 15 TDs in consecutive seasons, joining Terrell Davis, Shaun Alexander and Larry Johnson in that category. Henry's coming off a season where he ran for 2,027 yards, fifth-most in NFL history.

Henry called Jones a dynamic player, "one of if not the best receiver in the league.” That means Jones will be respected by opposing defenses, but Henry didn't want to peek ahead about how that might affect the number of defenders he sees crowding the line to stop him.

“We just try to put it all together while we're here and just try to work and try to make each other better ...” Henry said Wednesday. “He likes to work hard, I like to work hard, and that's all we try to bring to the table as far as being teammates.”

Todd Downing, the Titans' new offensive coordinator, says there's times to get excited about what an offense can do with Jones and his skillset. But Downing made clear the Titans aren't changing their foundation or scheme for the addition of one player.

“I’m excited that he has history in a scheme like this in his time in Atlanta, and I think that that’s going to help transition a little bit and it’s going to make it a little bit easier for us to highlight some of those skills,” Downing said.

Brown will have to wait until training camp to practice with his new teammate. Brown did not take part in the Titans' minicamp that wrapped up the last practice Wednesday as he recovers from offseason surgery on both knees. He said he was bored when he started his social media campaign for Jones to come to Tennessee.

“We talk about it all the time,” Brown said. “Who are they going to try to take away?”

First comes lots of work before that fun starts Sept. 12 in the opener against Arizona.

By John Glennon 60 minutes ago
an hour ago
By Dan Scifo 2 hrs ago
By Josh Dubow 8 hrs ago
By Dennis Waszak Jr. 9 hrs ago