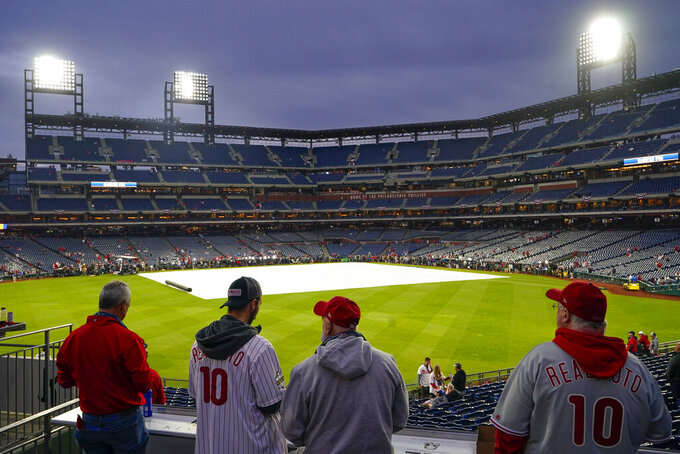 Fans arrive for Game 3 of baseball's World Series between the Houston Astros and the Philadelphia Phillies on Monday, Oct. 31, 2022, in Philadelphia. The game was postponed by rain Monday night with the matchup tied 1-1. (AP Photo/Matt Rourke)

PHILADELPHIA (AP) — In the City of Brotherly Love and the undefeated Eagles, Justin Verlander showed the reverse of the first and playfully gave Phillies fans another kind of bird Monday — with his middle finger as he stepped off Houston’s team bus.

“Whole interaction was in jest as all the fans around you were just saying hello in their native tongue," Verlander tweeted several hours later. "So I responded in kind ... all in good fun. I enjoyed the banter.”

One more finger, of course, than you’d need to count the Astros ace’s World Series wins, 0-6 with a 6.07 ERA in eight starts.

Also the number of days Game 3 of the World Series was delayed — postponed by rain with the matchup tied 1-1, pushing the entire Fall Classic schedule back one day.

“We waited long enough that we can see on the radar what’s coming," baseball Commissioner Rob Manfred said. "We had three, actually four different weather people looking at it. Everyone was consistent about this second wave of rain."

The rainout moved Game 3 to Tuesday night at Citizens Bank Park, when the weather was supposed to be all clear and first lady Jill Biden had planned to attend Game 4. There was a smattering of boos at the ballpark when the washout was announced an hour before the scheduled first pitch on Halloween night.

Game 4 will now be played Wednesday and Game 5 is set for the scheduled travel day on Thursday night — Game 5 will compete with the NFL game that has, of all teams, the Philadelphia Eagles in Houston against the Texans.

There will be a travel day on Friday if necessary. That had been the original date of Game 6.

Game 6 has been rescheduled for Saturday and Game 7 would be Sunday. All games will start at 8:03 p.m. ET.

There has not been a World Series day game since 1987, and it appeared there was little discussion about turning Game 5 on Thursday into a late-afternoon start and keep it away from the NFL as it reigns as a ratings juggernaut. The Eagles-Texans game will stream exclusively on Amazon Prime Video. The World Series airs on Fox.

“For the World Series, an important consideration for us is having the biggest audience we can possibly get, and that’s a prime-time audience. That’s the reality," Manfred said. “We think we have a great product that fans want to see. And we’re going to put the games on when it makes sense to play the games and hope to get a good audience.”

Houston right-hander Lance McCullers Jr. is set to pitch against Phillies lefty Ranger Suárez in Game 3. Noah Syndergaard had been scheduled to start for Philadelphia before the rainout.

“It affects both teams. You just have to turn it off, get a good night’s rest and be ready to play tomorrow," Astros manager Dusty Baker said. "It’s part of the game. You can’t control the weather, so you just deal with it.”

Phillies manager Rob Thomson was fine with the decision by Major League Baseball to postpone the game.

“Everybody would rather play in dry conditions. It’s going to be fair for everybody,” he said.

For fans, tickets that were good for Monday night now become valid for Tuesday's game, when the calendar rolls over to November.

Game 1 starter Aaron Nola will start for the Phillies in Game 4 against Cristian Javier. Either Syndergaard or Kyle Gibson will start Game 5 for the Phils. Game 2 starter Zack Wheeler takes the mound for Game 6 on extra rest, setting up Suárez to start a possible Game 7 in Houston.

Thomson felt confident turning to Suárez in Game 7 even though he was roughed up by the Astros for six runs in three innings on Oct. 4 in his final start of the season.

“Some guys get sped up, get a little excited,” Thomson said. “Some guys, their heartbeat stays the same, and Ranger is one of those guys.”

Phillies righty Kyle Gibson could start Game 5 if the Phillies turn to Syndergaard in the bullpen in either of the next two games. Syndergaard went to the outfield after the postponement for some light long tossing in the rain.

Gibson would be a stretch after he went 10-8 in 31 starts but none since Oct. 1. His only postseason appearance was 1 1/3 innings of scoreless relief in Game 2 of the NLCS on Oct. 19 against the Padres. Gibson went 1-3 with a 9.79 ERA over his last six regular-season starts. Thomson said he could get 60-65 pitches out of Gibson.

The Astros and Phillies both worked out on the field Monday before the tarp was put down around 5 p.m. It started to rain about an hour later.

“I’m glad we took some batting practice and played some balls off the wall. That’s their real home-field advantage," Baker said.

And once again, rain intruded on the World Series in Philly.

In 2008, the clinching Game 5 actually took three days to play. The Phillies and Tampa Bay were tied when the game was suspended and, after steady rain the next day, Philadelphia won the World Series a day after that.

The start of World Series games in Philadelphia in 1993, at Veterans Stadium, and 2009, at Citizens Bank Park, were delayed by rain. This year, the Phillies clinched the NL Championship Series with a win against San Diego on a rainy, gusty Sunday.