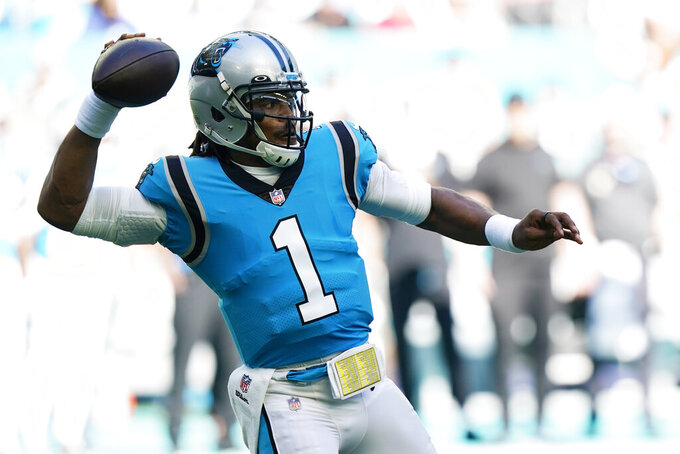 Carolina Panthers quarterback Cam Newton (1) aims a pass during the first half of an NFL football game against the Miami Dolphins, Sunday, Nov. 28, 2021, in Miami Gardens, Fla. (AP Photo/Wilfredo Lee) 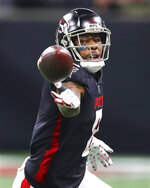 CHARLOTTE, N.C. (AP) — The game plan for the Carolina Panthers heading into an NFC South matchup against the Atlanta Falcons on Sunday is pretty simple: run the football.

Panthers coach Matt Rhule's desire to run the ball is one of the reasons he fired offensive coordinator Joe Brady last week. Rhule has repeatedly said this season he wanted to focus on the running game — he'd like to do so about 33 times per game — but for whatever reason Brady didn't get the message.

So when the Panthers ran the ball just 18 times in a 33-10 loss to the Miami Dolphins before the team's bye week, Rhule decided to jettison the 32-year-old Brady just 28 games with the team.

Given their familiarity with each other — they have been friends since high school when Rhule used to make football highlight films on VHS for Nixon — it's expected they'll be on the same page philosophically.

Falcons coach Arthur Smith knows there won't be major tweaks from the Panthers, but said how things are called could change.

“It's midseason. It’s not like also you’re going to come up with some magical new offense,” Smith said. ”They’re a physical team. They ran the ball efficiently last time and they won first, second down. Got themselves in a lot of second-and-shorts and third-and-shorts. Will they run the exact same plays? I doubt it, but they’ll have probably a similar philosophy."

Chuba Hubbard, who had 82 yards on 24 carries and a touchdown in the first meeting against Atlanta, and Ameer Abdullah will carry the load for Carolina on Sunday with 2019 All-Pro running back Christian McCaffrey out for the season.

The Falcons are tied for 27th in the league in rushing offense with a modest average of 88 yards per game. But there are signs that Smith’s determination to get the ground game untracked in his first season is finally paying off.

Over the past two weeks, Atlanta has rushed for 270 yards on 52 carries. That includes 121 yards against Tampa Bay last week and 149 yards in a win at Jacksonville on Nov. 28.

The Falcons’ 5.19 yards per carry in those two games is encouraging. Cordarrelle Patterson leads Atlanta with 489 yards rushing, including 108 yards with two touchdowns against Jacksonville. Former Panthers backup Mike Davis is second with 338.

Rhule called the versatile Patterson one of his favorite players to watch in the NFL and someone who needs to be accounted for in the defensive game plan. Patterson already has career highs in yards rushing, yards receiving (518) and touchdowns (nine).

“Obviously CP has had a huge impact this year," Smith said. “Certainly, when you sign somebody in free agency, you hope you get a decent amount of production and he’s exceeded that.”

Cam Newton is still looking to break a dubious streak of 10 straight losses as Carolina's starting quarterback. His previous win came Nov. 4, 2018, against Tampa Bay, long before Tom Brady arrived and built the Buccaneers into a Super Bowl champion.

Although Newton has lost both starts since returning to Carolina, Rhule doesn't plan to go back to P.J. Walker, who is 2-0 as an NFL starter. Rhule said he has a package where he could utilize Walker if needed, but said he's sticking with Newton for now.

Last week’s 30-17 loss to Tampa Bay left the Falcons 0-5 in games played in Atlanta this season. However, the Falcons are 5-2 away from Mercedes-Benz Stadium, including a win over the New York Jets in London when the Falcons were the designated home team.

They face a Carolina team that has not lost four straight at home. Carolina's previous win at home came on Sept. 19.

Although the Panthers will be without injured No. 1 cornerback Donte Jackson for the remainder of the season, Rhule doesn't anticipate Stephon Gilmore seeing additional action. The 2019 Defensive Player of the Year has been effective since being acquired in a trade with New England, and played a season-high 43 snaps in the game against the Dolphins.