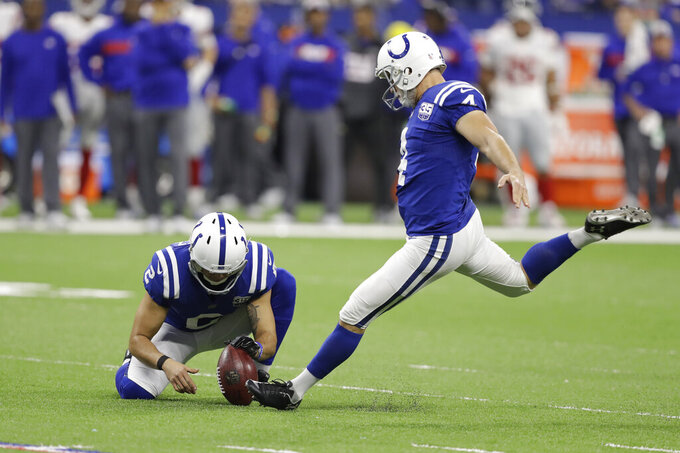 FILE - In this Dec. 23, 2018, file photo, Indianapolis Colts' Adam Vinatieri (4) kicks a field goal from the hold of Rigoberto Sanchez during the second half of the team's NFL football game against the New York Giants in Indianapolis. The 48-year-old former Colts and New England Patriots star told former teammate and SiriusXM radio host Pat McAfee that he plans to retire. “By Friday, if paperwork goes in, you heard it here first,” Vinatieri said. (AP Photo/Darron Cummings, File) 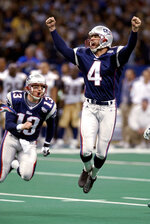 A surgically repaired left knee apparently will force him out.

“By Friday, if paperwork goes in, you heard it here first,” Vinatieri said.

Vinatieri’s final kick was blocked and returned 63 yards to break a 17-17 tie. He went on injured reserve the next week and later had surgery on the knee, and his rehabilitation process was complicated by the COVID-19 pandemic. Vinatieri didn’t play last season.

This is not how anyone expected Automatic Adam to go out.

After he missed six extra points and eight field goals in what turned out to be the worst season of his 24-year career, the Colts opted not re-sign Vinatieri, who still wanted to play.

His decision this week ends one of the longest and most distinguished careers in NFL history.

Vinatieri also played in 365 regular-season games, second behind Andersen (382), and is the only player in league history to top the 1,000-point mark with two different franchises.

He entered the league as undrafted free agent and became known as the best clutch kicker in NFL history. Vinatieri made 29 game-winning kicks during his career, including three that won Super Bowl titles for New England.

Vinatieri started the 1996 season by missing four of his first six field-goal attempts, and then-coach Bill Parcells considered cutting him. But the rookie saved his job with a 31-yarder into the into the wind and rain with 36 seconds left in a 31-0 victory over Arizona.

Vinatieri spent 10 seasons with the Patriots, delivering one memorable moment after another.

He forced overtime in a 2001 divisional round playoff game with a 45-yard field goal in blizzard conditions.

“I would say it was by far the greatest kick I have ever seen,” Patriots coach Bill Belichick said more than a decade later. “There were probably 3 to 4 inches of snow on the ground. It was a soft snow that kind of didn’t go away. I mean, there was no way to get around it. The magnitude of the kick was significant. It’s got to be the greatest kick of all time, certainly that I’ve seen.”

Vinatieri later won that game with a 23-yarder.

After he scored 1,158 points with New England, the Pats let Vinatieri become a free agent and he landed in Indianapolis, where he spent the next 14 seasons writing the second chapter of his career. He scored a franchise-record 1,515 points with Indy.

The scoring numbers are only part of Vinatieri’s remarkable resume.

The four-time Super Bowl winner and three-time All-Pro was part of 242 regular-season wins, and broke career records for field-goal attempts (715) while becoming the third-oldest player to appear in an NFL game. He scored points in 47 different stadiums, too.

Vinatieri played in six AFC championship games, five Super Bowls and a record 397 games including the playoffs. He also was selected to the NFL’s 100th anniversary team.

Former teammate Reggie Wayne posted on Twitter that Vinatieri was the greatest kicker of all time.

“Congrats on your retirement bro. It was a pleasure to sit back and watch #greatness for many years,” Wayne tweeted.

Just how much history has Vinatieri been a part of?

His teammates have included Tom Brady and Peyton Manning, two of the top three in career yards passing; and Frank Gore and Curtis Martin, two of the league’s top six career rushers. He played against 13 of the top 15 career scorers, everyone except himself and George Blanda, while working with two Hall of Fame coaches, Parcells and Tony Dungy, as well as Belichick.

Yet Vinatieri managed to carve out his own spot in the record books.

His 21 100-point seasons shattered the previous mark of 16. He made a league record 10 game-winning kicks in overtime. He holds the league mark for consecutive field goals (44), and nobody has been better in the postseason, where he was 56 of 69 on field goal attempts and has 238 points, all records.

Vinatieri also managed to chase down Herschel Walker with a textbook, touchdown-saving tackle in 1996.

His passions go beyond football.

In 2018, the avid hunter opened a 10,000-square foot lodge in Missouri, Record Breaking Ranch. The previous year, he received Indiana’s highest civilian award — the Sagamore of the Wabash.

“Adam understands and embodies what it means to be a Hoosier,” Indiana Gov. Eric Holcomb said at the ceremony. “He is truly deserving of the highest honor in the state.”