Another quick day for Pegula, who makes Miami Open semis 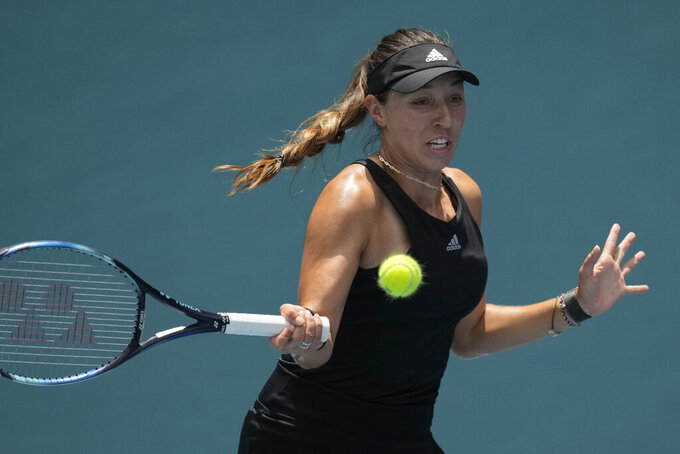 Jessica Pegula of the U.S. returns a ball to Paula Badosa of Spain in their quarterfinal match at the Miami Open tennis tournament, Wednesday, March 30, 2022, in Miami Gardens, Fla. (AP Photo/Rebecca Blackwell) 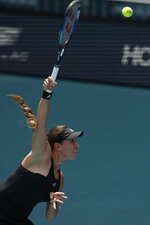 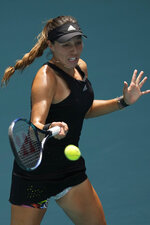 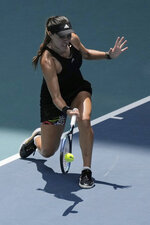 The No. 16 seed has made the semifinals at the Miami Open, benefiting from a second consecutive abrupt ending. She won her quarterfinal against fifth-seeded Paula Badosa on Wednesday, after the Spaniard retired five games into the first set.

Pegula has played four matches so far in this tournament, needing only 5 1/2 sets to record those victories. She had a first-round bye, won her next two matches in straight sets and her fourth-round match ended when unseeded Anhelina Kalinina retired after Pegula won the first set 6-0.

Then came Wednesday, when Badosa bowed out down 4-1.

“Of course, it’s not nice to win that way,” Pegula said. “It’s the first time I’ve ever even hit with her at all and I was really looking forward to playing because she’s been having an amazing year.”

Badosa — who was No. 71 in the world rankings at this time last year — will climb to a career-best No. 3 when the computer numbers are updated Monday. She would have gone to No. 2 had she beaten Pegula.

Badosa said she woke up Monday not feeling well and wasn’t even sure she could play that day in a fourth-rounder against Linda Fruhvirtova. Badosa battled through, winning that match 6-2, 6-3, but was clearly not herself on Wednesday.

“She’s an incredible competitor,” Pegula said. “I think we all saw that last round where she clearly wasn’t feeling well and she was able to tough it out. I admire that a lot and hopefully next time we can both play when we’re healthy and feeling good and have a great match.”

Pegula will next face No. 2 Iga Swiatek — who becomes No. 1 in the world rankings next week — in Thursday night's semifinals. Swiatek ousted No. 28 Petra Kvitova 6-3, 6-3 in the last women's quarterfinal.

The other women’s semifinal is Thursday afternoon, when No. 22 Belinda Bencic will face unseeded Naomi Osaka.

Pegula has spent a total of 3 hours, 22 minutes on court in her four matches. That’s only four minutes more than it took for the Buffalo Bills to beat the Miami Dolphins 35-0 at Hard Rock Stadium last September, a game Pegula knows a little something about — since her parents own the Bills.

The Dolphins’ sprawling facility — which will also play host to a Formula One race later this spring — is the home of the Miami Open and the stadium court is inside Hard Rock Stadium. Other courts are built where parking lots around the stadium used to be, but the court where Pegula played Wednesday is a temporary structure constructed atop where the Dolphins’ field usually is.

“I’ve been here before, on this field, in a different scenario,” Pegula said. “But I’m sure we have some Bills fans here, so it’s nice to get another win in this stadium.”

The quick end of the Pegula-Badosa match meant the stadium court sat empty for nearly two hours, until No. 9 Jannik Sinner — a finalist in Miami last year — faced unseeded Francisco Cerundolo in a men's quarterfinal.

And after 22 minutes, that match was over — also in just five games. Cerundolo advanced when Sinner, down 4-1, retired with a blister on his right foot.