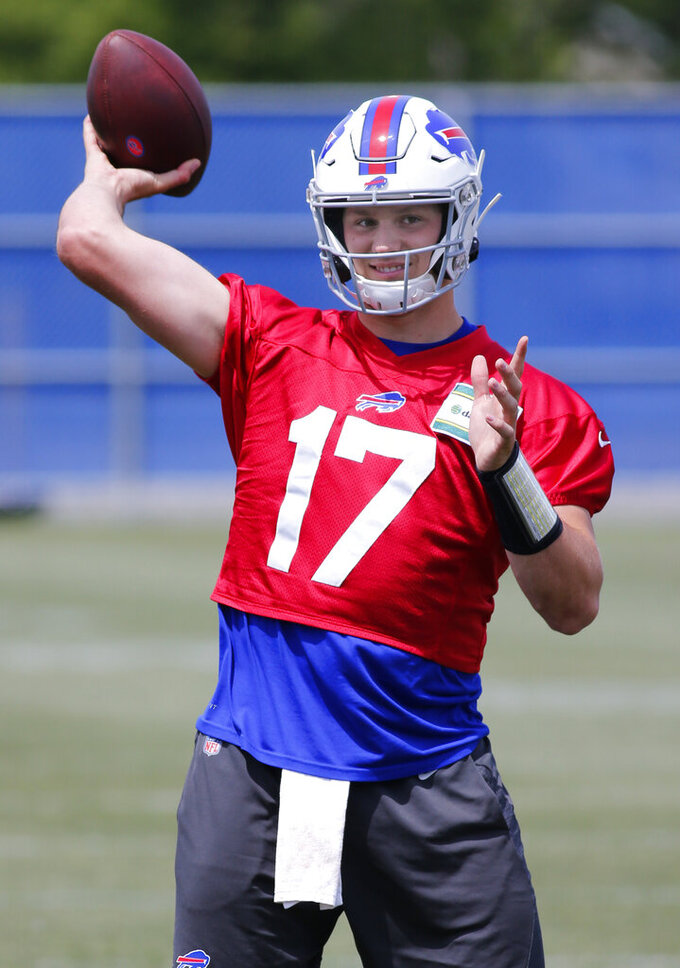 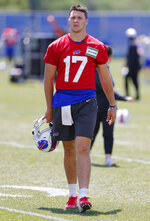 BUFFALO, N.Y. (AP) — Josh Allen wasn't sure what to make of someone referring to him as being a happy-go-lucky person because the Buffalo Bills quarterback wondered if it implied he doesn't take his job seriously.

At the same time, Allen was taken aback Wednesday in deflecting the suggestion he still has plenty to prove entering his second NFL season.

Allen wouldn't budge when pressed further if that included him, by saying: "All right, like I said, we move as a team, and we're going to try to have to have that same mindset."

This is the same person who a few weeks ago said, "I just want to play football and win football games," when asked how much pressure he bore to fill what's been an unsettled position in Buffalo since Hall of Famer Jim Kelly retired 22 years ago.

The just-turned 23-year-old who proudly chugged a can of beer at teammate Micah Hyde's recent charity softball tournament, is no different from the player who paused to trash-talk Jaguars cornerback Jalen Ramsey on the way to celebrating a touchdown during a 24-21 win last season.

What matters to Allen is he doesn't want anyone to see him sweat.

"Time will come where frustrations happen. That's the game of football," he told The Associated Press.

"When adversity hits, you've got to persevere and overcome. A big saying in my family household growing up was 'APO'. Adjust, persevere, overcome," Allen added. "That was from my high school coach. My dad loved it and he says it every day."

Allen has persevered through plenty following a college career in which he was initially overlooked by FBS schools and made the jump from California's Reedley junior college to Wyoming before being selected by Buffalo with the seventh pick in the draft last year.

Having assumed the No. 1 job much earlier than expected following Nathan Peterman's meltdown in Buffalo's opener, Allen is tasked with having to build off an inconsistent season.

Allen finished with a 5-6 record, in which he went 3-3 down the stretch after missing four games with a sprained right throwing elbow. He showed off his athletic ability by hurdling Minnesota linebacker Anthony Barr in a 27-6 win in Week 3, and followed that with a two-interception outing and a 36.3 quarterback rating in a 22-0 loss at Green Bay.

In going 169 of 320 passes for 2,074 yards with 10 TDs and 12 interceptions in 12 games, Allen ranked 32nd in completion percentage, yards passing, touchdowns and touchdowns versus interceptions ratio.

Not all the inconsistencies were on Allen, who oversaw an offense featuring a patchwork line and no-name receivers led by Zay Jones and undrafted rookie Robert Foster.

He won't have the same issues this year after the Bills overhauled their offense in free agency by adding receivers Cole Beasley and John Brown, and retooled their line with seven newcomers, led by center Mitch Morse.

Another advantage is having an entire offseason to prepare after Allen spent most of last spring and summer working as a third-stringer behind Peterman and AJ McCarron. And he is expected to have a better grasp of the playbook and offensive coordinator Brian Daboll's philosophies.

"He's grown mentally and physically off the field and on the field as a leader," said Daboll, noting he's had Allen call his own plays this spring. "We're doing a lot of different things right now just to throw on his plate and see what we need to keep getting better and, and see what he's got a firm grasp of."

Coach Sean McDermott is encouraged by what he's seen.

"Josh is a young man that is driven and very in-tune and very self-aware to his development as a young man and as a football player and how important that is to our organization," McDermott said. "I've seen that through the habits that he's undertaken since he left here in January, and then when we got him back, and what he's done since that time."

In March, Allen invited Bills receivers to work out with him in California. Allen also made a point to greet each of Buffalo's free-agent additions .

That doesn't mean Allen is anywhere close to being a finished product.

A practice highlight Wednesday, featured Allen avoiding the pass rush by rolling to his left and, with a flick of his wrist, lofting a pass to Andre Roberts, who made a leaping catch in double coverage for what would've been a 30-yard touchdown. The lowlight followed a few plays later, when Allen rolled to his left and telegraphed a pass easily intercepted by Jordan Poyer.

Allen focused on the positive, saying he always looks for the bright side.

"I can always find something to be happy about, something to look at and try to improve instead of pouting about it and putting my head down," he said.

"I had a bad throw today and I slapped myself on the helmet and after a brief second, I was, 'OK, people are looking at me, I've got to get back on track,'" Allen added. "I've got to have positive body language, positive talk, and that's how I keep going."

That doesn't make him any less driven.