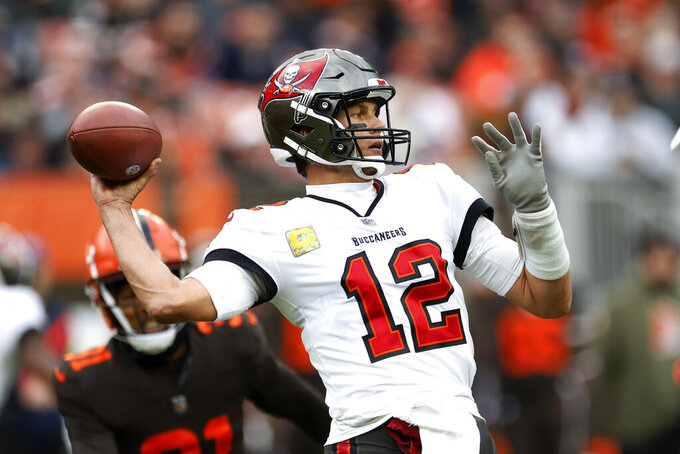 Tampa Bay Buccaneers quarterback Tom Brady (12) throws a pass during the second half of an NFL football game against the Cleveland Browns in Cleveland, Sunday, Nov. 27, 2022. (AP Photo/Ron Schwane)

TAMPA, Fla. (AP) — Tom Brady only knows one way the Tampa Bay Buccaneers can pull out of a season-long funk on offense and realize their potential.

Brady entered Week 13 ranked fourth in the NFL in passing, behind Patrick Mahomes, Josh Allen and Joe Burrow, with 3,051 yards.

Still, the 45-year-old quarterback and a group of talented offensive playmakers around him have not performed anywhere near the consistency of the past two seasons when the Bucs were one of the NFL’s highest-scoring teams.

Tampa Bay (5-6) heads into Monday night’s game against the New Orleans Saints (4-8), a NFC South rival that’s given Brady fits since he moved from New England to Tampa Bay in 2020. The Bucs are averaging just 18.2 points per game — down from more than 30 the last two years.

Only five teams are scoring fewer points per game than the Bucs, who despite having a losing record remain in a good position to repeat as division champions. They could host a home game in the playoffs, where no player has been as successful as Brady.

“We’ve got six games and everything will be determined by what we do going forward, and I think that’s important for all of us to realize,” the league’s career-passing leader said.

“Everyone, every team faces different adversities and we’ve faced quite a few in different ways. ... We’ve had some really great wins, we’ve had some really tough losses,” Brady added. “No one likes the fact that we’re 5-6, believe me. We’re not celebrating any of that. We have not played the way we’re capable of playing. I think the thing we can do about it is this week we can try to go out and play the way we’re capable of playing.”

The last-place Saints trail the Bucs by only 1½ games in a tight division race in which no team has a winning record.

New Orleans has won four of five regular-season meetings between the teams since Brady joined the Bucs, although Tampa Bay did win a playoff matchup on the way to capturing the quarterback’s seventh Super Bowl title.

New Orleans expects to catch Brady and the Bucs at their best, too.

Some of Tampa Bay’s problems on offense are linked to having the NFL’s 32nd-ranked rushing attack.

But Saints defensive end Cameron Jordan, who has 17 sacks and 18 tackles for loss in 23 career games against the Bucs, emphasized New Orleans understands previous success against Brady means nothing.

Brady pointed to turnovers as the difference in the series.

The Bucs intercepted Jameis Winston three times and had five takeaways overall in a 20-10 victory at New Orleans in Week 2, a game that was tied 3-3 entering the fourth quarter.

Jordan stressed if the Saints are going to improve their plight, they need to do whatever necessary to win Monday night.

“I have no idea in terms of analytics ... but to us, every game is of the utmost importance. It’s dire to win this game,” Jordan said.

“It doesn’t matter the opponent. Right now, we have to win or we’re going to be sitting the same place we were at the end of last year — outside of the playoffs. And that’s not where we want to be,” Jordan added, “We have a chance. We have to be able to capitalize upon that.”