Browns turn it over 3 straight plays, lose to Patriots 27-13 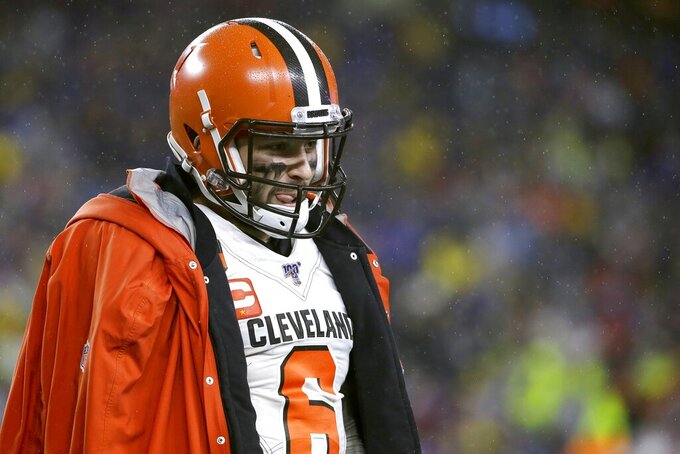 FOXBOROUGH, Mass. (AP) — This one slipped out of Cleveland's hands.

On three plays in a row.

The Browns turned the ball over on back-to-back-to-back plays in the first quarter on a rainy New England Sunday, leading to a pair of Patriots touchdowns that changed a three-point lead into a runaway and a 27-13 victory for the defending Super Bowl champions.

Nick Chubb ran for 131 yards, but he also fumbled on consecutive plays before Baker Mayfield was intercepted on a shovel pass to put Cleveland (2-5) in a hole it couldn't get out of against the dominant New England (8-0) defense.

It's the first time a team has committed turnovers on three straight plays from scrimmage since the Dolphins did it in 2012 against the Texans. Chubb did not fumble at all in 192 carries as a rookie last year, but he has now fumbled three times in the past two games.

"I'm just going through the spell right now," he said. "The guys had my back. I was down. I was down bad. It was two in a row and that's just something that I don't do often, so it was kind of new to me. I feel like I let the team down, but the guys and the coaches had my back."

The Browns had just stopped New England at the 2-yard line, forcing the Patriots to settle for a field goal, when Chubb got his first carry of the day. But he was kicked in the facemask and arm by offensive lineman Joel Bitonio as he toppled over a defender, and the ball popped out.

Dont'a Hightower picked it up and ran it 26 yards for a touchdown to make it 10-0.

After the extra point and kickoff, the Browns took over at their 40 and on the first play Chubb broke four tackles on his way to a 44-yard run. But as he approached the end zone, Jonathan Jones chased him down and punched the ball out . Devin McCourty recovered at the 4.

"When it's wet outside, you've got to be extra careful with the ball," Mayfield said, adding: "I'm not going to say it's all the weather; it's not."

The Cleveland defense held. But on the first play after the New England punt, Mayfield tried a shovel pass that was intercepted by defensive end Lawrence Guy , who ran 5 yards to the 11. Two plays later, Tom Brady hit Julian Edelman for a touchdown to make it 17-0.

Mayfield and his team came into the season with high expectations following an 0-16 season in 2017 with a 7-8-1 record last year that was their best since 2007. But they have lost three straight games, falling three games behind the Baltimore Ravens in the AFC North.

"I hate to keep saying it again, but everything's in front of us. I still think we can turn it around," Mayfield said. "There's no finger-pointing going on. That's not the type of team we are. We know exactly what's wrong. We know the problem."

After falling behind 17-0, the Browns made it a one-score game in the third quarter.

But penalties doomed many of their drives, including back-to-back false starts that left them with a first-and-20 at the start of the fourth quarter.

"I don't think there was any moment where it was like, 'It's over.' We kept fighting all game. We fought hard," said receiver Odell Beckham Jr., who had five catches for 52 yards. "It's not like I'm patting us on the back. We lost. There is no patting on the back."