Cowboys' Cobb gets to see old team, QB in visit from Packers 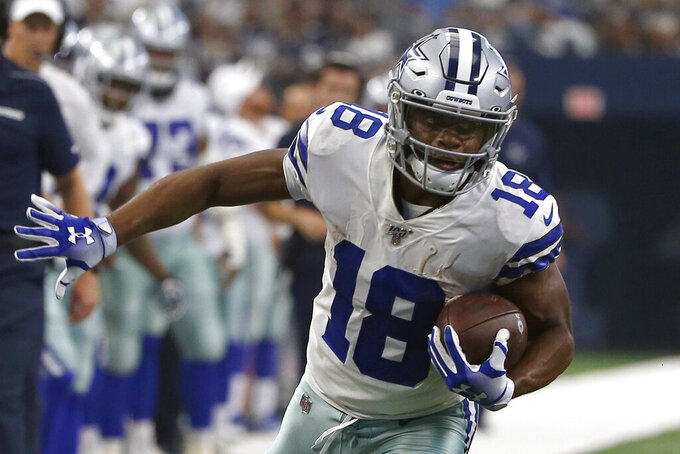 FILE - In this Sunday, Sept. 8, 2019, file photo, Dallas Cowboys wide receiver Randall Cobb (18) finds running room after catching a pass in the first half of a NFL football game against the New York Giants, in Arlington, Texas. Cobb still talks to his old quarterback regularly despite the receiver’s move to the Dallas Cowboys after spending his first eight seasons with Aaron Rodgers and the Green Bay Packers. While Cobb hadn’t spoken to Rodgers as of the middle of the week leading to their first game against each other Sunday, the trusty slot man didn’t seem too hung up on avoiding contact.(AP Photo/Ron Jenkins, File)

FRISCO, Texas (AP) — Randall Cobb still talks to his old quarterback regularly despite the receiver's move to the Dallas Cowboys after spending his first eight seasons with Aaron Rodgers and the Green Bay Packers.

While Cobb hadn't spoken to Rodgers as of the middle of the week leading to their first game against each other Sunday, the trusty slot man didn't seem too hung up on avoiding contact.

Neither did Rodgers, who went through this a year ago when Jordy Nelson was cut and ended up in Oakland after nine seasons in Green Bay. He and faced the Packers in a preseason game. Rodgers and Nelson played catch before the game.

"It was strange seeing Jordy last year in the silver and black for sure just because he'd been with us for so long," Rodgers said. "It's different seeing Randall in the blue and white, but still close friends and definitely pulling for success for him for the entire season. He's a fantastic guy.

"It will be strange to see him. Maybe I'll get to throw him a couple passes like we did with Jordy last year."

Cobb was nonchalant about it, but seemed to hint he would seek out Rodgers before Packers (3-1) visit the Cowboys (3-1) with both teams seeking bounce-back wins after opening with three straight victories.

"We were obviously friends first and foremost from the time I met him down at the Derby and became close teammates, spent a lot of time together, holidays and vacations and stuff," Rodgers said. "That won't change now that he's a West Coast guy in the offseason, which is fantastic. But it'll be fun to see him."

Cobb tried to downplay the significance of the reunion from a football standpoint, although he hinted during the offseason he might have a little something to prove after signing a $5 million, one-year contract with the Cowboys while the Packers didn't make an offer.

"What is this, Week 5?" Cobb said after a pause and a chuckle when asked if there was added motivation. "Just Week 5, man. Another game, another opportunity for us to go show what we're all about."

The next attempt to broach the subject was whether Cobb would find himself dealing with more emotion in the hours before the game. Rodgers and Cobb shared a teary hug before their final game last season, perhaps coming to grips with the separation that eventually happened.

"You tell me on Monday what you see," Cobb said with the hint of defiance that shows up in his answers occasionally. "I pride myself in playing hard and being the best that I can be week in and week out. And I'm definitely going to give it my best this weekend."

When it comes to business, Cowboys coach Jason Garrett has little doubt where Cobb's focus will be. Garrett fondly recalls Cobb as a pain in the rear, although he used another word, from their days as opponents.

The first of Cobb's two career 100-yard playoff game came against Dallas during the 2014 season. He has 14 catches for 157 yards and a touchdown in his first four games with Dak Prescott.

"He's just got a great feel for playing the game," Garrett said. "Got an incredible competitive nature to him. He can do so many different things. Short passes, that he breaks a tackle and goes and makes a big run after the catch. You see him do a lot of little things that just make a difference."

Seems safe to say that competitive nature will come out Sunday.