Falcons CB Terrell back at practice after missing 3 games 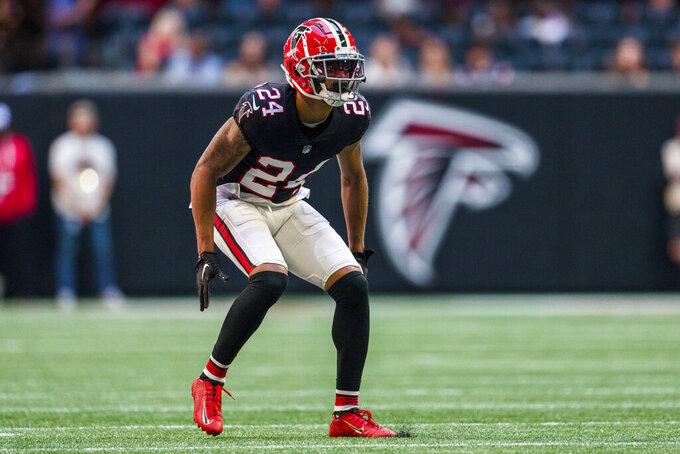 FILE - Atlanta Falcons cornerback A.J. Terrell (24) lines up during the first half of an NFL football game against the San Francisco 49ers, Oct. 16, 2022, in Atlanta. Terrell returned to practice on Wednesday, Nov. 16, after missing three games with a hamstring injury. Coach Arthur Smith said he is “hopeful” Terrell, the team's top defensive back, can return for the team's game against the Chicago Bears on Sunday, Nov. 20. (AP Photo/Danny Karnik, File)

Coach Arthur Smith said he is “hopeful” Terrell, the team’s top defensive back, can return for Sunday’s game against the Chicago Bears.

Terrell suffered the injury on Oct. 16 against San Francisco and tried to return the following week, when he was on the field for only eight plays against Cincinnati. He was inactive the past three games.

Following practice, Terrell said his status for Sunday’s game is “in the air.”

“I’m pushing it as much as I can, just to see where I’m at,” Terrell said, adding this is his first hamstring injury.

“They’re tricky and this is my first one so I’m just trying to make sure it doesn’t happen again,” Terrell said. “Just taking all the precautions.”

Terrell’s injury came after Atlanta’s other season-opening starter at cornerback, Casey Hayward, was placed on injured reserve with a shoulder injury. Hayward has missed four games.

Falcons offensive lineman Jalen Mayfield, who opened the season on injured reserve with a back injury, was designated to return on Wednesday and also was at practice. When healthy, Mayfield could provide help at left guard, where injuries have forced Atlanta to use three starters.

Falcons offensive line coach Dwayne Ledford said Hennessy, who started two games at center as a rookie in 2020, and Gossett have shown versatility while helping the offensive line go through three starters at left guard.

“The thing about it is we were able to get a lot of those guys reps at a lot of different positions throughout training camp,” Ledford said. “If you’re not going into the season and you’re one of the (starters), you have to be able to play multiple positions to provide a lot of depth and just value to yourself.”

Similarly, Mayfield has played tackle and guard. After missing the first 10 games, Mayfield may need more than one week to be ready to come off IR.

“It’ll be good to get Jalen back out there and get him practicing and starting to take reps,” Ledford said.

“Obviously it’s been a while since he’s been out there, but it’s always exciting for us as coaches to get guys back and see him out on the practice field.”