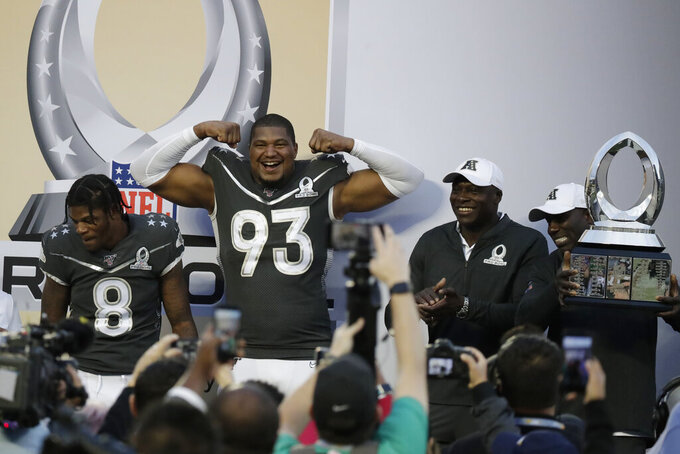 AFC defensive end Calais Campbell, of the Jacksonville Jaguars, (93) and quarterback Lamar Jackson, of the Baltimore Ravens, celebrate at the end of the NFL Pro Bowl football game against the NFC, Sunday, Jan. 26, 2020, in Orlando, Fla. The AFC defeated the NFC 38-33.(AP Photo/John Raoux)

OWINGS MILLS, Md. (AP) — For years, the Baltimore Ravens have been impressed by the play of defensive end Calais Campbell.

Now, via a trade with Jacksonville, they've finally got the five-time Pro Bowl star on their side.

The Ravens on Thursday announced the deal that secured Campbell, a skilled run-stopper who also has a knack for getting to the quarterback.

In exchange for Campbell, Baltimore gave up the 2020 fifth-round pick it got from Atlanta in a trade this week that sent tight end Hayden Hurst to the Falcons.

The Ravens agreed in principle with Campbell on a one-year contract extension, pending the passing of his physical, general manager Eric DeCosta said.

Because of the coronavirus pandemic, the NFL has banned players from traveling to perform physicals.

Campbell is an imposing 6-foot-8, 300-pounder who averaged 65 tackles and 10 1/2 sacks in his three years with the Jaguars. He previously played nine seasons with Arizona, who grabbed him in the second round of the 2008 draft out of the University of Miami.

“Calais is a player we have long admired, even going back to the draft when he came out of college,” DeCosta said. “He’s a natural fit for our defense and a versatile player. Even better, he is a leader on the field and in the community. We are so excited to add Calais and can’t wait to welcome the Campbell family to Baltimore in person.”

Since making his NFL debut with the Cardinals, Campbell’s 151 tackles for a loss stand as the NFL’s second most behind J.J. Watt. Campbell has 11 straight seasons with at least five sacks, the longest active streak in the league.

Just as important, his presence — along with that of free agent acquisition Michael Brockers — should vastly improve a run defense that last year allowed 4.4 yards per carry, most in franchise history.

Brockers, who played last year with the Los Angeles Rams, agreed to terms on a three-year contract. The deal has not yet been announced by Baltimore, but Brockers' agent confirmed the transaction earlier this week.

With Campbell and Brockers joining 336-pound Brandon Williams on Baltimore's three-man defensive line, free agent Michael Pierce was deemed expendable and not offered a contract. He reportedly signed with the Vikings.