Panthers lean heavily on McCaffrey in upset bid of Chiefs 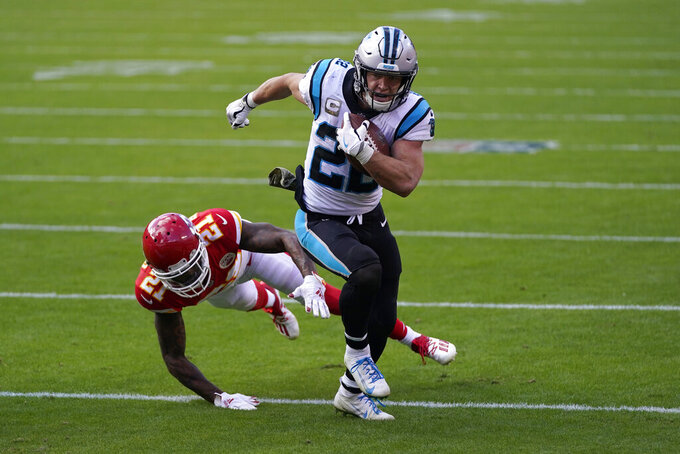 KANSAS CITY, Mo. (AP) — Carolina coach Matt Rhule promised that Christian McCaffrey would get a full load against Kansas City if he was healthy.

Starting with an opening 75-yard drive on which McCaffrey carried four times and caught a pair of passes, including the touchdown, the Panthers leaned heavily on their All-Pro running back.

He wound up with 18 carries for 69 yards and a touchdown, 10 catches for 82 yards and that other score, and showed no lingering effects from an ankle injury that had sidelined him the past six weeks in a 33-31 loss to the Super Bowl champions on Sunday.

“Great players show up in crucial times. He showed up crucial times,” Rhule said. "Our ability to run the football results in way more touchdowns and he did a good job.”

He was a big reason why the Panthers (3-6), who have lost four straight, were close to pulling off the upset.

Despite the heavy workload early in the game, McCaffrey was still fresh enough to snare an incredible 24-yard pass in the fourth quarter, setting up Teddy Bridgewater's touchdown run that got Carolina within 26-24.

Then after the Chiefs scored, McCaffrey powered into the end zone to make it 33-31 with just under two minutes left in the game.

The Panthers failed to recover the onside kick, but their defense forced a quick punt, and Bridgewater and Co. took over at their 9-yard line with 1:26 left. McCaffrey appeared to get banged up on the second play of the drive, but he returned to make a catch at the sideline that gave Joey Slye a chance to kick a game-winning 67-yard field goal as time expired.

Slye had the distance with the wind behind him, but the kick sailed to the right and was no good.

“It was a heavy left-to-right wind,” Slye said. “I tried to play with the wind and tried to find the right wind pattern and swing pattern. It just got pushed by the wind. I don’t know if I had the leg or not.”

The missed field goal spoiled what was otherwise a triumphant return for McCaffrey, who was not made available to the media after the game; Rhule also did not provide an update on his running back's health.

“McCaffrey is a pretty good player and had a pretty good day,” said Chiefs coach Andy Reid, who tried to shadow him much of the game with safety Daniel Sorensen. “We tried a couple of different things on him. You have to give him different looks. But listen, great players make plays. Whether it was his catches or his runs, he had a great day.”

So did the rest of the Carolina offense.

McCaffrey's ability in the passing game, both picking up blitzes and catching the ball, made life a lot easier for Bridgewater, who was 36 of 49 for 310 yards and two touchdowns with another on the ground.

The attention on McCaffrey also helped to free up Curtis Samuel, who hauled in nine catches for 105 yards and a score.

“It was definitely good having Christian back this week," Bridgewater said. “He fought for us and ran hard and caught the ball out of the backfield and picked up guys in protection.”

He also made sure they reached pay dirt. The Panthers were 4 for 4 scoring touchdowns in the red zone, and they are 8 of 9 when they have McCaffrey on the field this season. They are just 10 of 21 without him.

“You play a team as good as the Chiefs, and they are a great team, but we don’t want it to be a common theme being right there," Bridgewater said.