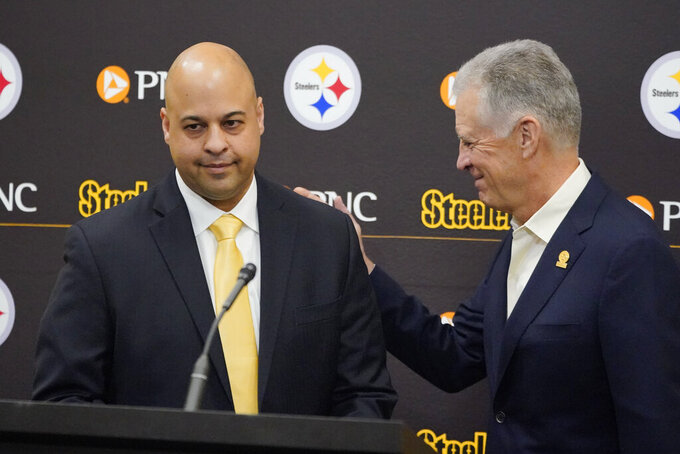 PITTSBURGH (AP) — It did not take Omar Khan long to figure out he wanted to be around football. Growing up in New Orleans as an ardent Saints fan in the 1980s and 90s, he knew right away his life's mission was to be involved in the NFL.

Even as he matured, even as he realized — like nearly every kid that dreams of playing on Sundays in the fall — that he probably didn't have the talent to actually pull a helmet over his head and run out of the tunnel, the goal remained the same.

Over and over again, Khan would tell his father A.R. and his mother Carmen that he planned to be in the league. Somehow. Some way. He wasn't going to be a doctor. Or a lawyer. Or a teacher. All noble professions to be sure. Just professions he knew weren't for him.

“All I wanted to do was work in the NFL, become a general manager and win a bunch of Super Bowls,” Khan said.

Khan, 45, already has the Super Bowls checked off after helping the Pittsburgh Steelers win two after joining the franchise more than two decades ago.

Now he'll get a chance to do it as the guy calling the shots after the Steelers promoted him to replace Kevin Colbert as general manager.

“I’m confident time will show this was the right decision for this franchise,” Khan said shortly after being formally introduced. "I don’t take anything for granted. I understand the expectations that come with this job.”

He initially joined the Steelers in 2000 as a football operations/coaching assistant, the first of what would be several positions he would hold while methodically working his way up the ladder, most recently building a reputation as a shrewd salary-cap guru while serving as the club's vice president of football operations and business administration.

Khan expects to remain heavily involved in contract negotiations, noting “I’ll have my hands in a lot of things I’ve done before."

While team president Art Rooney II stressed “we know Omar and Omar knows us," Khan is assembling a staff that will include outside voices. Philadelphia Eagles vice president of player personnel Andy Weidl is returning to his hometown as assistant general manager, and former Detroit Lions vice president and Washington Commanders scout Sheldon White is taking over as the Steelers' director of pro scouting.

Khan called both of them “Steelers-type” people, pointing to their loyalty and ability to fit quickly into the team's culture. Dan Colbert, Kevin Colbert's son, also is being elevated to director of college scouting.

It's unclear whether Brandon Hunt, Pittsburgh's pro scouting coordinator under Colbert, will remain with the club. Hunt is among more than a dozen candidates who interviewed for the chance to become Kevin Colbert's successor. Hunt also has recently interviewed for vacant positions with other clubs, including Philadelphia.

Khan's promotion and the new brain trust at the top of the team's flow chart, coupled with quarterback Ben Roethlisberger's retirement and the offseason overhaul of the coaching staff that included longtime defensive coordinator Keith Butler's departure, signals a significant amount of turnover for a place almost synonymous with stability.

Yes, the faces and titles may be evolving, but Khan insists the standard the Steelers hold themselves to is not.

“Look I can tell you from the first day I started here in Pittsburgh, it’s been all about football and building a championship roster here and that’s not going to change,” Khan said.

He inherits a roster that has established stars like reigning Defensive Player of the Year T.J. Watt and perennial Pro Bowl defensive lineman Cam Heyward as well as emerging players like running back Najee Harris.

Pittsburgh is coming off a 9-7-1 season that ended with a playoff loss in Kansas City. The Steelers haven't won a postseason game in more than five years, the franchise's longest drought between playoff victories since the birth of the “Super Steelers” dynasty in the early 1970s.

Still, Khan is excited about the team's trajectory and eager to continue to work with coach Mike Tomlin, whose passion resonates throughout the building.

It's a passion that Khan cultivated long ago, one that planted the seeds for what he is calling his “dream job.” Not bad for the son of immigrants from India and Honduras.

And yes, the significance of his hiring at a time when the NFL is grappling with better representation both on the sideline and in front offices is not lost on him. He's also eager for the day when the ethnicity of who is getting what job is no longer newsworthy.

“I hope we get to the point where we need to have those conversations,” Khan said. “I'm excited about what the league is doing ... I think it's heading in the right direction.”