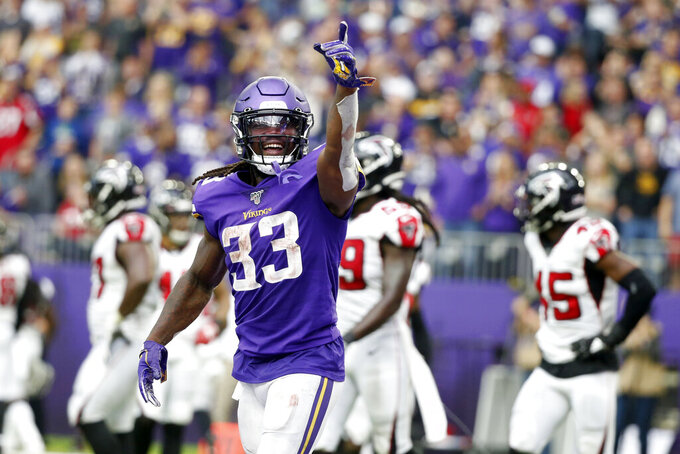 Minnesota Vikings running back Dalvin Cook (33) celebrates after scoring on a 7-yard touchdown run during the second half of an NFL football game against the Atlanta Falcons, Sunday, Sept. 8, 2019, in Minneapolis. (AP Photo/Bruce Kluckhohn)

MINNEAPOLIS (AP) — After dropping back to pass a mere 11 times for Minnesota, Kirk Cousins joked that this defense-and-running-dominated performance felt like youth football.

He was more than happy to hand the ball off and get out of the way.

Anthony Harris had two interceptions and a fumble recovery, Dalvin Cook rushed for 111 yards and two touchdowns, and the Vikings started the season with a 28-12 victory over the Atlanta Falcons on Sunday.

"It was what the game called for, and I have no problem with being conservative," Cousins said. "As long as we win the football game, that's all that matters."

Eric Wilson recovered his own blocked punt at the 21-yard line after a three-and-out by the Falcons on the first possession of the game, and the Vikings were well on their way to winning a fourth straight opener. Including the blocked punt, their first in five years, they turned all four Falcons turnovers into touchdowns.

Cousins connected with Adam Thielen for a 23-yard score to finish the short first drive. He crossed the goal line on a 1-yard sneak in the second quarter to cap a 79-yard march to give Minnesota a 21-0 lead. Cousins went 8 for 10 for 98 yards, all career lows for games he started, but there was no need for more on this turnover-free afternoon by an offense that sputtered down the stretch last season.

"When I'm on the field, a lot of special things can happen," said Cook, who missed 17 of his first 32 games to injury.

Cook carried the ball 21 times behind the new zone blocking scheme influenced heavily by new offensive adviser Gary Kubiak, the former Houston and Denver head coach. Cousins averaged 38 attempts per game in his first year with the Vikings, and much to Zimmer's chagrin they finished with the third-fewest rushing yards in the NFL. The new system directed by offensive coordinator Kevin Stefanski and the favorable field position sure shifted the ratio hard the other way.

"We know that's the strength of our team. We know we have one of the best running backs in the NFL, if not the best, and we know we have an offensive line that can just ground and pound," Thielen said.

Matt Ryan played more like a rookie than the 2016 league MVP beginning his 12th season, unable to find his footing all afternoon in the face of a fierce pass rush that racked up four sacks. The worst moment came at the end of Atlanta's first possession of the second half, a 13-play, 82-yard drive thwarted when his second-and-3 fling into the back of the end zone for backup tight end Luke Stocker was picked off by a leaping Harris. Ryan said Stocker cut his route too short.

"Both interceptions today were poor decisions, and they cost us," said Ryan, who finished 33 for 46 for 304 yards and two fourth-quarter scores to Calvin Ridley and Julio Jones to make the fantasy football players happy.

The Falcons, though, left without much to be pleased about. Devonta Freeman had only 19 yards on eight carries, plus the lost fumble. Jones, who signed a $66 million, three-year contract extension on Saturday, was targeted 11 times but managed only 31 yards on six catches.

Trying to get a once-potent offense back on track this year after missing the playoffs along with the Vikings in 2018, the Falcons started rookies Kaleb McGary and Chris Lindstrom on the right side of their offensive line. James Carpenter won the left guard job over Jamon Brown, who signed an $18.75 million, three-year contract in free agency. McGary took turns at right tackle with Ty Sambrailo, with Matt Gono inactive because of a back injury. Lindstrom left the game with a foot injury.

Falcons: WR Russell Gage was removed from the game on the final drive of the first half with a concussion, after converting a first down and being leveled by Vikings FS Harrison Smith. A woozy Gage twice tried to get up and jog off, only to fall back to the turf.

Vikings: Nickel CB Mackensie Alexander injured his elbow in the second quarter and did not return. ... WR Stefon Diggs was in the lineup after being listed as questionable with a hamstring injury. He had two catches for 37 yards.

Falcons: Host Philadelphia on Sept. 15, one of two night games on their schedule at Mercedes-Benz Stadium this year.

Vikings: Play at rival Green Bay (1-0) on Sept. 15. Their visit to Lambeau Field in Week 2 last season resulted in a 29-all tie with the Packers.