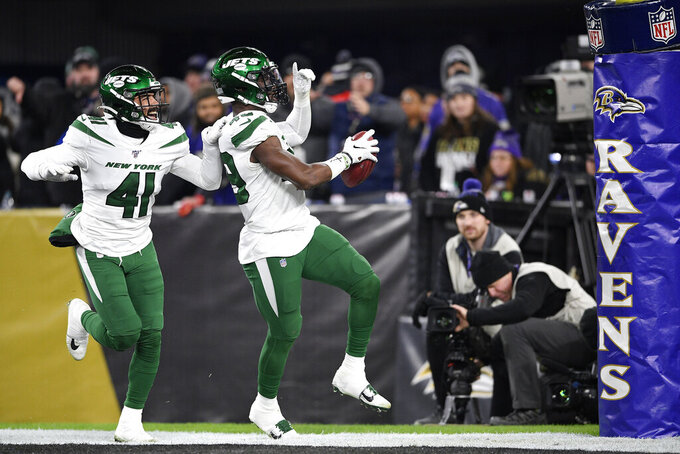 New York Jets linebacker B.J. Bello (49) reacts while returning a Baltimore Ravens blocked punt for a touchdown during the second half of an NFL football game, Thursday, Dec. 12, 2019, in Baltimore. Jets defensive back Matthias Farley (41) joins in the celebration. (AP Photo/Nick Wass)

BALTIMORE (AP) — There haven't been a whole lot of positives for the New York Jets this season, with the possible exception of their success against the run.

New York entered Thursday night's game against the Baltimore Ravens with the second-ranked rush defense in the NFL, and no team allowed fewer yards per carry than the Jets.

Problem is, none of those sparkling numbers meant a thing to quarterback Lamar Jackson and the running Ravens.

Baltimore scored touchdowns on each of its first three possessions and cruised to the finish against the Jets (5-9), who are now guaranteed a fourth straight losing season.

Not only did the Jets failed to stop the run, but they couldn't contain Baltimore's passing game, either. Jackson threw five touchdown passes without an interception.

Bottom line: New York had no idea what was coming next from the highest-scoring team in the league.

“We were just trying to figure out what was going on," Gase said. “Sometimes against this group, you do not want to commit because you are unsure. They run their offense well but you have to pull the trigger and make a decision in real time. And it is not easy."

The Jets found out what many of the better teams in the NFL already knew: This is one tough offense to stop, especially when Jackson is able to dart downfield and elude would-be tacklers.

“He got outside of the pocket. He extended plays," groaned safety Marcus Maye. “I don't think we did a good enough job of keeping him in the pocket."

New York put up 21 points on a very good Baltimore defense, but that included a touchdown on a blocked punt. Though Sam Darnold threw two TD passes, he was also picked off and lost a fumble.

“I felt like we made our plays in the passing game when they were there," Darnold said. “We ran the ball well. There were just a couple throws I'd like the get back."

Le'Veon Bell ran for 87 yards, one week after sitting out Sunday's win over Miami and bowling a career-high 251 the night before.

“I was glad to come out of the game healthy, and I feel good right now," he said.

Not many of the Jets were that upbeat. Not even Jamison Crowder, who caught two touchdown passes.

“It's been a roller coaster. We were hit with a lot of adversity," Crowder said of the team's expansive injury list. “We've just got to keep going. This is the NFL and nobody's going to feel sorry for us. We've got to keep running."