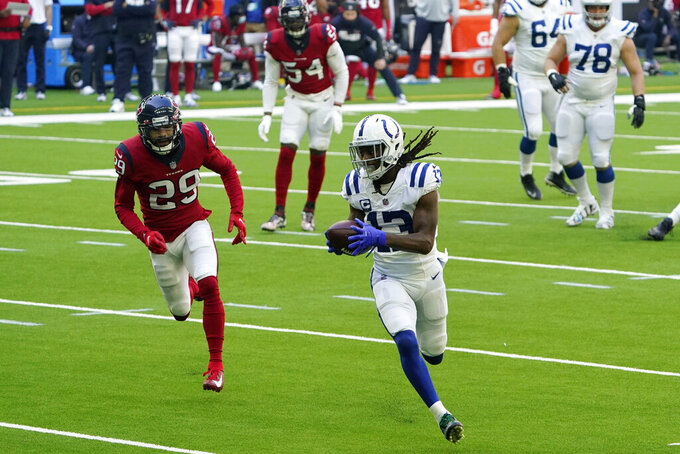 Now he has two in two weeks, his first 100-yard game in almost two years, and the four-time Pro Bowler seems to be finding his groove. The timing couldn't be better as the Indianapolis Colts fight for a playoff berth.

“Sort of, yeah," Hilton said when asked if Sunday's game plan was designed around his play-making skills. “It was just trying to get me going and there's no better place to do it than here (Houston). It got me going, got me flowing, and it got the offense going."

The successes of Hilton and the Colts have gone hand in hand most of the last nine seasons. But Indy (8-4) needed everything the 31-year-old receiver could muster to get past the Texans 26-20.

He caught an 18-yard pass on Indy's first play. He finished the first drive with a nifty 21-yard catch-and-run play for his second score of the season. He kept Indy's second scoring drive alive with a twisting, 21-yard, third-down reception that was originally ruled out of bounds. And his 16-yard catch late in the first half set up a 42-yard field goal to give Indy a 24-17 lead.

The impact Hilton made was evident on the stat sheet. In the first half, he caught seven passes for 100 yards when Indy scored a season-high 24 points. He caught one pass for 10 yards in the second half when Indy's offense was shut out.

But his presence looms larger than numbers.

“When you see him make a play, the sideline just gets electric because of the guy he is in the locker room,” rookie running back Jonathan Taylor said. “So when he makes a play, he gets the offense and the defense going.”

Hilton has showed flashes earlier this season. He had four catches for 53 yards in a season-opening loss at Jacksonville, and six catches for 69 yards in the loss at Cleveland.

But after catching four passes for a season-high 81 yards against Tennessee and topping those numbers at Houston, Hilton may finally be on track for a strong finish — like the Colts need.

“I feel like we’ve said it all year long, it’s just a matter of time till he really gets rolling," quarterback Philip Rivers said. “I know it’s not the same statistics that we’re used to seeing him have. But he had a huge day. “

Indy's second-half defense has been virtually impenetrable, allowing 7.33 points over the final two quarters after shutting out Houston for the final 30 minutes Sunday.

The first-half defense. As incredibly stout as Indy has been in the second half, the slow starts remain a mystery. Indy has been outscored 100-65 in the first half over the past four weeks.

Defensive end Justin Houston isn't making sacks at the same rate he was in 2014 when he nearly broke the NFL's single-season record. But as the Texans learned, he's still a dominant pass rusher. Houston had three sacks, scored the only second-half points on a safety, and retook the team lead with 7 1/2 sacks.

RB Nyheim Hines had six carries for 10 yards and one TD as well as three receptions for 22 yards at Houston. He would have been much happier, though, if two long punt returns weren't negated by penalties.

5 — Officially, Houston got his fourth career safety, naturally in Houston. But the 31-year-old defensive end contends he doesn't share the NFL record with Ted Hendricks, Doug English and Jared Allen. He owns it.

“When I was playing with Kansas City, we were in Denver and I got a sack-fumble in the end zone, but they gave it to the team instead of me," Houston said with a chuckle. “I still don’t understand why they didn’t give it to me. So I feel like I have five. I think that’s my safety, so in my mind and in my household I have five.”

Sunday's trip to Las Vegas could help determine Indy's playoff fate. The Colts currently trail Tennessee in the AFC South, based on division record, and have the loss to the Browns. A win over the Raiders could give Indy a crucial advantage as a tiebreaker.