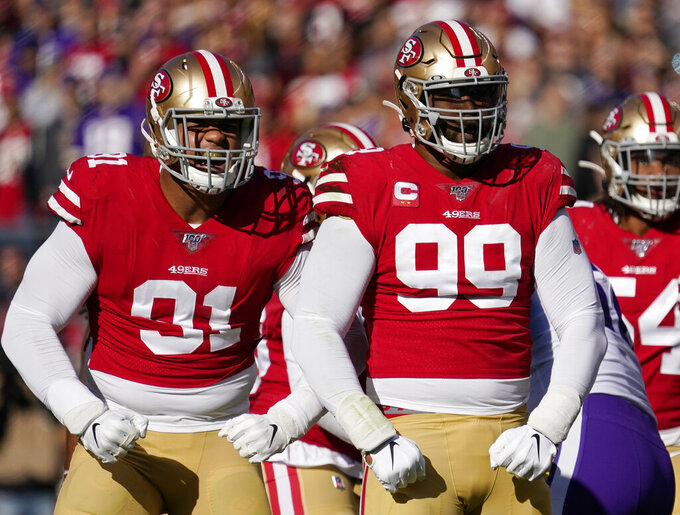 After coming within one quarter of winning the Super Bowl, the task for the San Francisco 49ers in free agency was more about keeping pieces in place rather than finding upgrades.

Those moves all came at a price as the Niners traded star defensive tackle DeForest Buckner to Indianapolis for the No. 13 overall pick and might not have enough salary cap room to keep free agent receiver Emmanuel Sanders.

But with almost every other starter from last season's NFC champions still under contract, the 49ers are hoping to avoid the plight of many Super Bowl runners up who struggled even to make it back to the playoffs the following season. The Niners blew a 10-point lead in the fourth quarter of the Super Bowl last month before losing 31-20 to Kansas City.

The team's biggest moves came in succession just after the start of open negotiating window on Monday when the Niners locked up Armstead with a five-year contract worth up to $85 million and then almost immediately traded Buckner to the Colts for a premium draft pick.

Buckner, who was entering the final year of his contract, then agreed to an $84 million, four-year contract with the Colts, a price the Niners weren't willing to pay for the player voted MVP of the team coaching staff this past season.

Coach Kyle Shanahan and general manager John Lynch ultimately decided that keeping Armstead and getting the first-round pick was preferable then doing a long-term deal with Buckner.

Whether that proves to be the right decision remains to be seen. Buckner has been the team's most consistent player since being drafted seventh overall in 2016.

Armstead had a breakthrough season in 2019, leading to his new contract. He was a first-round pick by San Francisco in 2015, but didn't make a big impact in his first four seasons in the NFL as he dealt with injuries that limited his playing time in 2016 and 2017 and tried to find the right fit for his skills.

The Niners also locked up Ward with a three-year contract, a person familiar with the deal said on condition of anonymity because it hasn't been signed yet. Ward, who will be paid a reported $28.5 million, also struggled with injuries for much of his career before having his best season in 2019.

San Francisco then reached agreements on deals with Blair, Coleman and Garland, according to a person familiar with the contracts. Those also won't be official until the players pass physicals and sign the contracts.

These deals leave the team little money left to target the other big need at receiver, where Sanders upgraded the position with his October acquisition from Denver last season.

The passing game took over after Sanders was acquired and the Niners will need to find a replacement if he leaves in free agency.

That's where the Buckner trade comes in handy as the Niners now have two picks (13th and 31st) in the first round of a receiver-rich draft. They could opt to trade down with one of those picks to replenish selections traded away in the second, third and fourth rounds in deals for Sanders and Dee Ford.