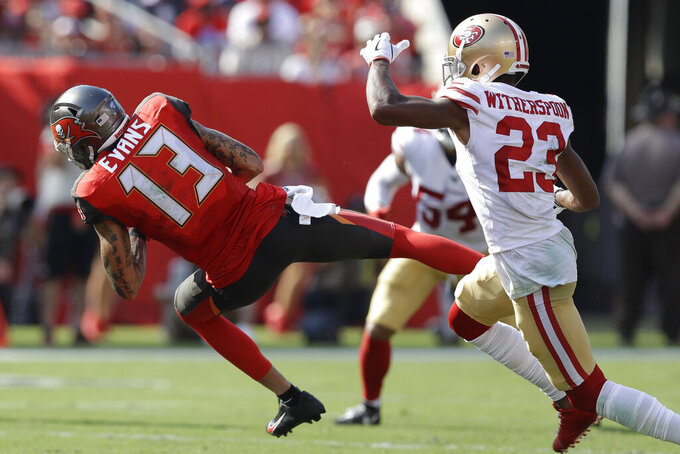 Something about him has changed.

"He's not really a different player," cornerback Richard Sherman said. "It's just the mental approach he takes to adversity, to things not going his way, to the play calls, the slips, whatever the refs are doing. He just doesn't let it bother him. He's a guy on a mission. The switch is flipped for him."

Last season, opponents rarely targeted Sherman, so they targeted Witherspoon frequently and he lost confidence. This season, Witherspoon has made opponents pay for challenging him. He intercepted a pass and returned it for a touchdown in Week 1 against the Tampa Bay Buccaneers, and nearly recorded another pick-six in Week 2 against the Cincinnati Bengals.

"I wish to God he would have gotten that pick-six," defensive coordinator Robert Saleh said. "Because you keep showing that you can (intercept) the ball as a corner and teams are going to have to look another way. He's going to get many opportunities and I just feel like he's doing a real nice job."

The 49ers drafted Witherspoon in the third round in 2017. He started nine games his rookie season and 12 games in 2018 but was inconsistent.

"The big thing, to me, is the work he put in in the weight room over the offseason," Saleh said. "He has gotten bigger. He has gotten stronger. He is able to press guys at the line of scrimmage and disrupt routes without disrupting himself. He's not having to lunge into people. He can stay on top and look for the ball."

Saleh also attributes Witherspoon's improvement to a new mindset. "He's been very business-like. His mental makeup, in terms of being smart enough to play the position, the foot quickness, all that stuff has always been there. But now, the mindset of making this business-like every single day, never getting comfortable, has been the biggest difference," he said.

On Thursday in the locker room, Witherspoon described his new mindset while suiting up for practice.

"I'm making practice game-like, so when I get to the game, it's easy," Witherspoon said. "And I'm just getting out of my head. Not trying to see the game so much or interpret the game, just playing free and comfortable. Last year, for example, I was trying to see too much. By the time you try to figure out what's happening, it has already happened to you in the other direction. This year, I'm just playing."

So far, Witherspoon has played exceptionally well against strong wide receivers, such as Mike Evans of the Buccaneers and John Ross of the Bengals. The challenges will continue this weekend when he matches up against Pittsburgh Steelers wide receiver JuJu Smith-Schuster.

"Consistency is the truest measure of performance," Saleh said. "Mentally, he's got to maintain that mindset and make sure he approaches every day like he's got something to prove. He's got to keep a chip on his shoulder. If he does that, he's going to have a really nice year and he can have a really nice career."