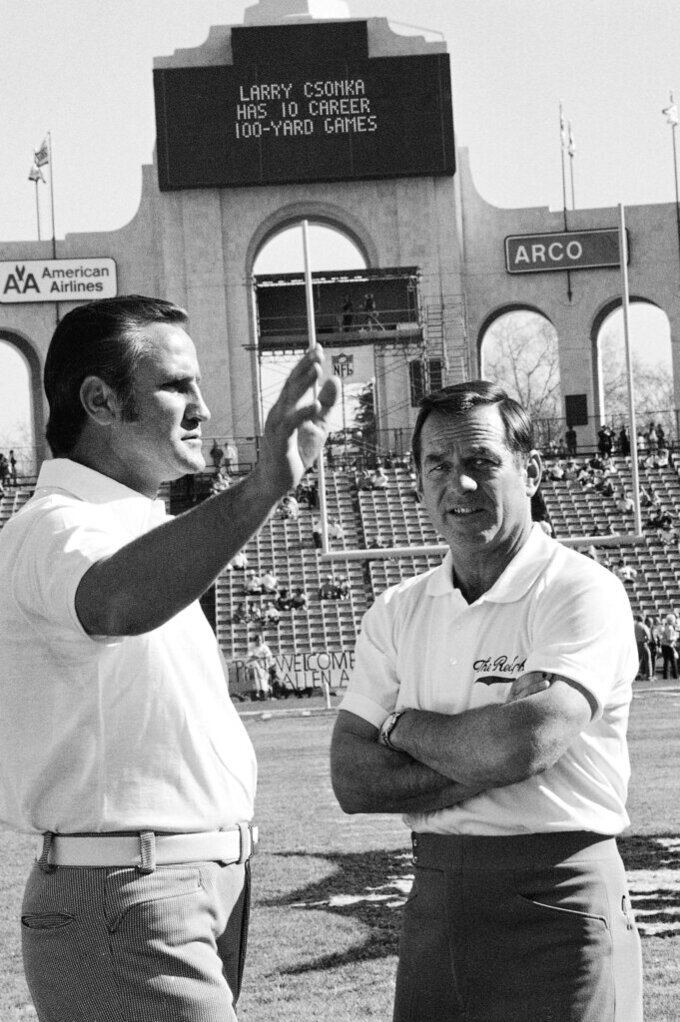 FILE - Miami Dolphins' head coach Don Shula, left, and Washington Redskins' defense coach Charley Winner inspect the turf at the Los Angeles Coliseum before the start of Super Bowl game on Jan. 14, 1973 in Los Angeles. The 1973 game was the last Super Bowl held at the Coliseum, which originally was built for the 1932 Summer Olympics and remodeled several times. (AP Photo/File) 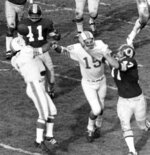 It can be argued — and has been for decades — that a perfect record including winning a championship makes that team the best in its sport.

And maybe the 1972 Miami Dolphins wouldn't have matched up with, say, the great Steelers dynasty of the later 1970s. Or the dominant 49ers of the 1980s. Or the Cowboys Triplets of the 1990s.

And, naturally, the 2007 Patriots who won all 16 regular-season games and two in the playoffs before falling to the New York Giants in the Super Bowl.

No matter: Miami owns the only unblemished record in the Super Bowl era.

“People think we’re a bunch of angry old guys who can’t wait for that last undefeated team to get beat,” Hall of Fame coach Don Shula, who died in 2020, once said. “We’re very proud of our record, and if somebody breaks it, I’m going to call that coach and congratulate them. Until they do, it’s our record, and we’re proud of it.”

Going through an entire NFL schedule and the postseason without a loss or tie seems like a pipe dream nowadays, particularly with the new 17-game season. The Dolphins set a standard that no longer is realistic — this isn't college football — and isn't even on pro teams' radars anymore.

The Dolphins also set a standard no team will ever want to match: Garo Yepremian's aborted field-goal attempt that turned into perhaps the worst try at a pass in NFL history. Washington's Mike Bass grabbed it and headed to the end zone for a 49-yard touchdown that was his side's only score in the 14-7 defeat.

“I thought, ‘Boy, this will be great if Garo kicks this field goal and we go ahead 17-0 in a 17-0 season. What a great way that would be to remember the game,’” Shula said. “And then Garo did what he did, and it’s 14-7 with still a couple of minutes to go. I’m looking for Garo, and I’m ready to kill Garo, and I couldn’t find him. He went down to one end of the bench, and I haven’t seen him since.”

Miami would win the Super Bowl the next year, too, though not since. Shula became the winningest coach in pro football with 347 victories as well as a powerful voice throughout the NFL, whether dealing with rules or roster makeups or league policy.

Washington also had a coach headed to the Canton, Ohio, shrine, George Allen. His approach of bringing in veterans at nearly ever position was feasible in the pre-salary cap days. Allen's “Over The Hill Gang” was a short-lived phenomenon, however.

But Washington would remain a contender and, by the 1982 season under Joe Gibbs, it became a Super Bowl champion. Gibbs would lead the franchise to two more titles, for the 1987 and 1991 campaigns.

For that club's fans, there have been no more such highs in the big game.

There have been plenty of trips to Canton for players who faced off in the 1973 Super Bowl which, if you can imagine this today, was played in the afternoon (12:30 p.m. PST).

Washington has four from that team: Allen, linebacker Chris Hanburger, receiver Charley Taylor and quarterback Sonny Jurgensen, who was a backup to Billy Kilmer that season.

The 1973 game was the last Super Bowl held at the Coliseum, which originally was built for the 1932 Summer Olympics and remodeled several times. While Southern Cal plays its home games there, pro football completely abandoned the Coliseum in 1980 when the Rams moved their base to Anaheim. The Oakland Raiders moved to LA in 1982 and played in the stadium until moving back to the Bay Area after the 1994 season.

Coincidentally, the Coliseum will be hosting an event just before the Super Bowl comes to SoFi Stadium: NASCAR will open its season there with a short-track race on Feb. 6.