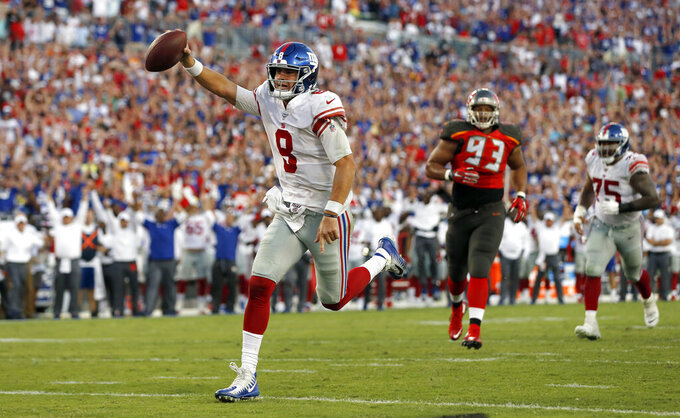 Oh, the moans and groans in Nawlins.

The consternation in Steeltown.

The woe is me refrains in Carolina's Queen City.

The joke's on me attitude in Jax.

And the tabloid screams in the Big Apple.

Maybe all of that dread and disgust will quiet down, at least for a week. Hey, folks, the new guys at quarterback did pretty darn well for your teams.

Teddy Bridgewater was steady in place of Drew Brees, guiding the Saints to victory in Seattle, as tough a place to win as any.

Kyle Allen, probably most famous in the NFL for once being a teammate of Kyler Murray's at Texas A&M, was a revelation in place of Cam Newton as the Panthers got their first victory of the season, in Arizona.

Gardner Minshew is making Jaguars fans wonder why he was a sixth-round draft pick, stepping in for Nick Foles and looking like a starter (and future star).

Daniel Jones, the guy who caused Giants general manager Dave Gettleman to be vilified for drafting the Duke QB sixth overall last April, looked worthy of a No. 1 overall pick. He stepped in for what the TV announcers were calling a New York legend, the benched Eli Manning, and lifted the team to last-minute victory at Tampa.

Only Mason Rudolph, replacing Ben Roethlisberger (elbow surgery) for the Steelers, didn't get a win among the newcomers. But he didn't embarrass himself at all — and had Pittsburgh in position to beat San Francisco.

Plus, in Indianapolis, this stuff isn't new for Jacoby Brissett, but his name certainly belongs high on the list of quarterbacks — eight teams already have them — who were not considered the starter last month and now are in charge of their teams.

Yes, one-quarter of the league, as injuries, ineffectiveness and in one case, a retirement (Andrew Luck), created a sea wave of change that still could turn into a tsunami.

There's no guarantees the likes of Marcus Mariota, Case Keenum, Jameis Winston or even Andy Dalton, despite his solid performances in Cincinnati's 0-3 start, will remain behind center.

And that's not even considering more injuries that often come, no matter how much NFL rules try to protect the passer.

For Week 3, though, let's celebrate these youngsters who stepped in and stepped up.

In his second-career start, Allen had four touchdown passes and a 144.4 QB rating.

Not to mention the arm and legs he showed.

At some point, it was clear the struggling Giants would turn to Jones. It came a bit earlier than some expected. So did his first NFL heroics.

Jones threw for 336 yards and two touchdowns and also ran for two TDs, including the go-ahead score with 1:16 remaining as New York rallied from an 18-point halftime hole to win 32-31.

"There's certain things that I knew about this kid when we drafted him. He was tough, he was competitive, and in my opinion he's a winner," Giants coach Pat Shurmur said. "Now the rest of it is just quarterback stuff. But those first three things give him a chance to move forward."

It's been a long road back for Bridgewater, who looked like Minnesota's franchise quarterback before a severe knee injury forced him to miss almost two seasons.

"I said all week Teddy is a leader," Saints running back Alvin Kamara said after Bridgewater threw for a touchdown, was not picked, and helped New Orleans to a huge road victory. "He had composure. He had poise and we got it done."

The rookie threw two touchdown passes against Tennessee last Thursday and also had a receiver drop a ball in the end zone. He's already a star in North Florida.

"Nothing rattles this kid," coach Doug Marrone said. "He's really good at communication and I think he's really good at preparing himself and making sure there are no surprises out there for him. That's just a guy that has a maniacal work ethic."

The showing by the second-year QB, basically a caddie for Roethlisberger until now, should calm the three rivers a bit in Pittsburgh. Rudolph wasn't spectacular, but also was victimized by some errors around him in the 24-20 loss to the Niners. He has no reason to hang his head.

"For a young guy to come and start his first game in an away game on the West Coast and going against a great team, I think he handled himself well," wideout JuJu Smith-Schuster said. "There were situations where we messed up, didn't execute or turned the ball over, he stayed positive and kept us going."