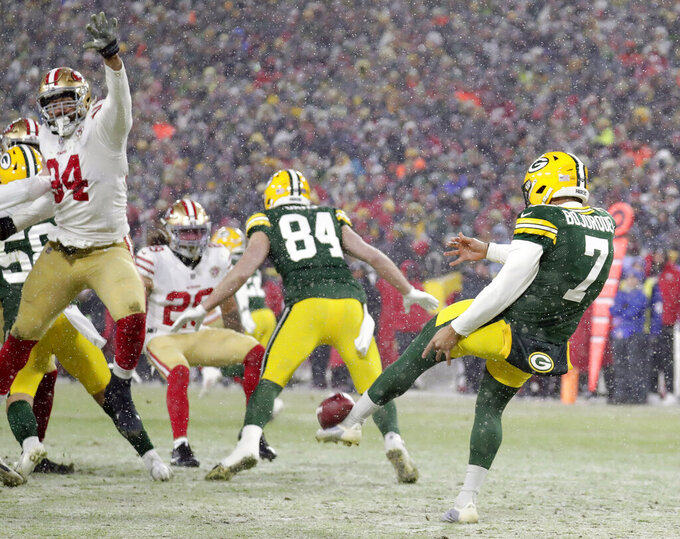 A person familiar with the situation says that Maurice Drayton won't be back as the Green Bay Packers' special teams coordinator next season.

The person spoke on the condition of anonymity because the Packers haven't made an announcement on Drayton's future yet.

The Milwaukee Journal Sentinel first reported that Drayton was out.

This move comes after the Packers had a punt and a field-goal attempt blocked in a 13-10 NFC divisional playoff loss to the San Francisco 49ers.

It marks the second straight offseason in which Packers coach Matt LaFleur has changed his special teams coordinator. LaFleur dismissed Shawn Mennenga last year and replaced him by promoting Drayton, who had been an assistant special teams coach with the Packers from 2018-20.

But the Packers fared even worse on special teams this season and reached a nadir in their playoff loss.

The Packers led 7-0 when San Francisco’s Jimmie Ward easily got through the line and blocked Mason Crosby’s 39-yard field-goal attempt on the final play of the first half.

The Packers also had only 10 men on the field when San Francisco’s Robbie Gould kicked a game-winning 45-yard field goal as time expired. LaFleur said the day after the game that this error occurred because the Packers miscounted from the coaches’ box how many players were on the field.

“Would it have made a difference?” LaFleur said the day after the game. “I don’t know. Maybe. But it sure looks bad, and it’s embarrassing that that happens under my watch.”

The Packers’ struggles on special teams were evident well before that playoff loss. According to efficiency metrics from Football Outsiders, the Packers had the NFL’s worst special teams during the regular season.

In a 13-7 loss at Kansas City on Nov. 7, the Packers had a field-goal attempt blocked and had a fumbled punt return that set up a Chiefs field goal. Green Bay beat the Chicago Bears 45-30 on Dec. 12 despite allowing Jakeem Grant to score on a 97-yard punt return and failing to recover an onside kick.

Running back A.J. Dillon fractured a rib during a pile-up while blocking on a kickoff return in the 49ers game, preventing him from playing for much of the second half.

“San Francisco had a lot of their starters on special teams,” LaFleur said. “That’s going to be something that I want to do some studies around the league and see how many teams operate that way. Again, does it have some inherent risk? Absolutely.”

Vrable has been the Packers wide receivers coach since 2020 after working as an offensive assistant in 2019.

Luke Getsy had been the Packers passing game coordinator this season as well as their quarterbacks coach. He left to become the Chicago Bears offensive coordinator under new head coach Matt Eberflus.

Mahaffey was an offensive quality control coach with the Packers this season.