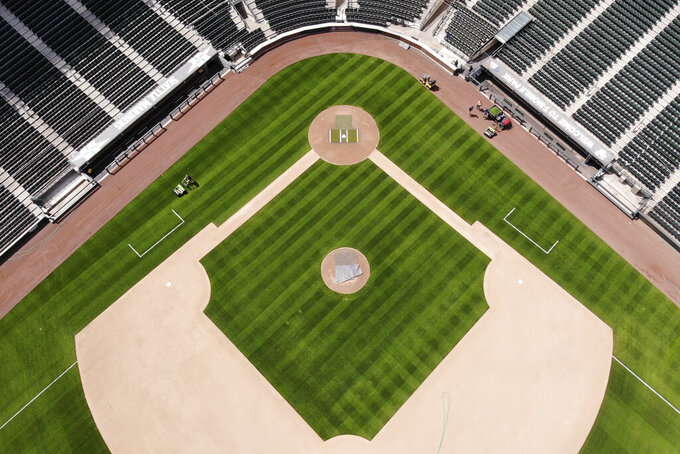 Grounds crew members mow as work continues to keep the Seattle Mariners' field in playing shape as the ballpark goes into its seventh week without baseball played because of the coronavirus outbreak, Monday, May 11, 2020, in Seattle. A person familiar with the decision tells The Associated Press that Major League Baseball owners have given the go-ahead to making a proposal to the players' union that could lead to the coronavirus-delayed season starting around the Fourth of July weekend in ballparks without fans. (AP Photo/Elaine Thompson)

NEW YORK (AP) — Major League Baseball did not include an economic proposal during its opening presentation to the players' union on terms to start the coronavirus-delayed season.

Illinois Gov. J.B. Pritzker criticized big leaguers for not being willing to cut pay further at a news conference on Tuesday, and Arizona Gov. Doug Ducey said his state is open to games without spectators for all the major sports starting Saturday.

The electronic meeting of MLB and the players' association lasted between three and four hours and consisted of baseball officials explaining their view of the economics, science and logistics of getting the season under way, several people familiar with the session told The Associated Press. The people spoke on condition of anonymity because no details were announced.

Owners gave the go-ahead Monday for a proposal that players receive the percentage of their 2020 salaries based on a 50-50 split of revenues MLB receives during the regular season and postseason, a person familiar with that plan told the AP. That person also spoke on condition of anonymity because the plan was not announced.

The concept would cut the expenses of teams worried about playing in empty ballparks due to the pandemic. The union views revenue sharing as a salary cap, which it has said it will never agree to, and the concept was not presented.

If empty stadiums or neutral sites are used, an agreement with the players’ association is needed to play ball.

Opening day was to have been March 26. MLB's plan could lead to the season starting around the Fourth of July with an 82-game regular season, playoffs expanding from 10 teams to 14 and the designated hitter used for the first time in games between National League teams.

MLB officials showed slides during the meeting and the union delegation, which included players, caucused and asked questions. Baseball officials explained how they would use a lab in Utah to give the sport its own testing ability, the people said.

Baseball officials also expressed concern about a second wave of the coronavirus in the fall and their worries it could force cancellation of the postseason. While players are paid their salaries during the regular season, the bulk of MLB's national broadcasting revenue derives from the postseason.

Players agreed March 26 to a deal in which they would be paid prorated shares of salaries based on the portion of the 162-game regular-season schedule that is played. As part of that agreement, if no games are played they would receive service time for 2020 matching what they earned last year.

The average MLB salary is $4.4 million at full price if the season had started on time.

“I realize that the players have the right to haggle over their salaries, but we do live in a moment where the people of Illinois and the people of the United States deserve to get their pastime back, to watch, anyway, on television,” Pritzker said in response to the last question of his news conference.

“If they’re able to come up with safety precautions, as has been suggested by Major League Baseball, that works, I hope that the players will understand that the people of our United States need them to recognize that this is an important part of leisure time that all of us want to have during the summer, to watch them play baseball, to root for our favorite teams,” the Illinois Democrat said. “We need that back, that normalcy back, and I hope they’ll be reasonable as they negotiate. But I must say I’m disappointed in many ways that players are holding out for these very, very high salaries and payments during a time when I think everybody is sacrificing."

A member of the family that controls Hyatt hotels, Pritzker's net worth has been estimated by Forbes at $3.4 billion.

Players and teams committed in the March deal to “discuss in good faith the economic feasibility of playing games in the absence of spectators or at appropriate neutral sites.” Union head Tony Clark has said that negotiation is over, and many players have said they already have deal with terms for 2020 and see no need to bargain more.

Baseball Commissioner Rob Manfred has said about 40% of MLB revenue is tied to gate, including concessions, parking, ballpark advertising, luxury suites and programs.

Union officials and players have cited the March agreement as setting economic terms and say they have no inclination for additional cuts.

Players are more interested in medical protocols and testing designed to protect them from and detect the new coronavirus.

Ducey announced “Major League Baseball, the NBA, the NHL, the NFL, MLS are able to participate and play in the state of Arizona after May 15.” Under some of baseball's possible plans, a portion of teams and possibly all would be based in the Phoenix area, but the first preference of late is to play in empty regular-season ballparks.

“Of course, this would be with CDC guidelines, and protecting the public health," the Republican said. "We have had discussions with leaders of some of these leagues and they all know they are welcome to operate, play and perform in the state of Arizona.”