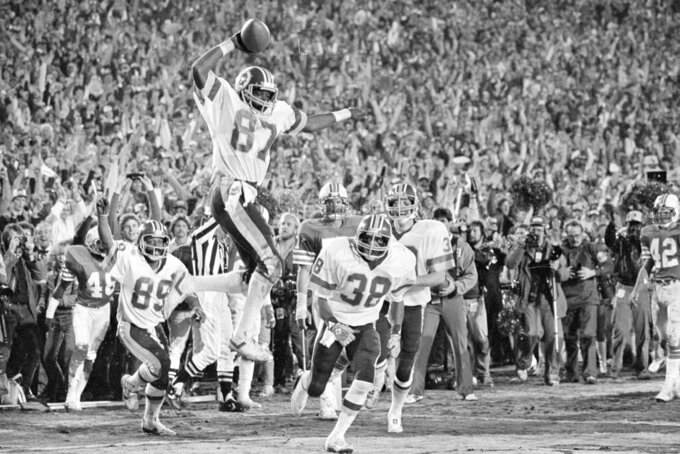 PASADENA, Calif. (AP) — Hail to the “Hogs,” Washington's fun-loving offensive line, and their partner, running back John Riggins, who set a Super Bowl rushing record and led the Redskins to the National Football League championship.

“They were magnificent," said Riggins, who kept following the Hog-made holes for a record 166 yards on 38 carries in the Redskins' 27-17 victory over the Miami Dolphins Sunday.

Riggins wasn't exactly shabby either in this pulsating come-from-behind triumph, played before 103,667 fans in the cavernous Rose Bowl. It was the second-largest crowd in Super Bowl history and the excitement of the game had to erase any lingering bad taste of this strange strike-interrupted season.

It was a big-play game between two teams that had been struggling for respect all season and they earned it in the season's finale with Washington's victory constructed around the churning legs of its piledriving fullback.

President Ronald Reagan noticed, saying in a phone call to the Washington locker room “I was going to ask Riggins to change the spelling of his name.”

“He's our bread and butter,” said coach Joe Gibbs. “We give it to him and make people take it away from him.”

So, when the Redskins, trailing 17-13 early in the fourth quarter and facing a fourth-and-1 at the Miami 43, lined up to go for it, there was no great mystery about who would get the ball.

The Dolphins called a timeout before the play. When they returned to the line of scrimmage, they had shifted from their basic 3-4 defensive set to one with six down lineman.

“It's easier to make a first down against the 3-4 defense,” said Grimm. “It's harder against the 60, but if you do make it, you usually make it big.”

That's just what Riggins did, sliding off the left tackle and shrugging off cornerback Don McNeal to race into the end zone for the touchdown that put Washington in front for the first time in the game.

Once armed with the lead, the Redskins kept Riggins banging into the Dolphins, chewing up chunks of yardage that eventually led to a wrap-up touchdown from Joe Theismann to Charlie Brown.

“The game started with a 50-gut (Riggins' basic call) and ended with a 50-gut,” said Starke. “We ran the same plays all day. Our plan to run the basic plays was there all day. We never had to go Plan B.”

Theismann played his part, tossing a pair of touchdowns and breaking up an almost-certain interception with a deft defensive play. But ask him about the game and he just grinned and said, “We just turned our Hogs loose today.”

As the Redskins approached Super Bowl 17, Riggins and the Hogs were happy because the Dolphins, a team which uses a 3-4 defense, were waiting for them.

“I look forward to playing against a 3-4 team,” he said. “So does our line. They do such a great job getting into those linebackers.”

Riggins kept taking handoffs from Theismann and thumping into the Dolphins defenders. Before the playoffs began, Riggins, concerned that he might be overlooked in the Washington attack, had asked Gibbs for the ball. The coach delivered it, perhaps more frequently than the fullback had anticipated.

“How many times did I carry? Thirty-eight? That's on the verge of too many,” he said.

It was just right for the Redskins, who overcame two stunning long-yardage plays which had built a 17-10 halftime lead for Miami.

The Dolphins had seized the early lead when David Woodley and Jimmy Cefalo combined for a 76-yard touchdown pass on Miami's fifth play from scrimmage. It was the second-longest TD pass in Super Bowl history.

On their next possession, Woodley had Miami moving again with a first down at the Miami 37. But he was sacked by Dexter Manley, who jolted the ball loose. Dave Butz recovered for the Redskins.

Riggins carried five straight times for 21 yards in the ensuing drive and with fourth-and 2 at the Miami 14-yard line, Mark Moseley kicked a 31-yard field goal. It came on the second play of the second quarter and touched off some scoring pyrotechnics.

Miami came right back, spinning off four first downs on an impressive drive to the Washington 3-yard line. But the Redskins stiffened there and Uwe von Schamann kicked a 20-yard field goal.

That made it 10-3 and Theismann came back throwing. He hit Rick Walker for 27 yards on the first play after the kickoff and later found Riggins — yes, he can catch the ball, too — for 15 more. The drive ended with Theismann passing to Alvin Garrett for a 4-yard TD.

That tied the score, but not for long. Fulton Walker, whose 42-yard return set up von Schamann's field goal, dashed 98 yards with the next one, the first time in Super Bowl history that a kickoff has been returned for a touchdown.

“We had a wedge left return,” said Walker. “I baited them into thinking I was going to the right, but cut it back. All I had (to beat) was the kicker. I threw a move on him and hit the open field.”

That made it 17-10 with just 94 seconds left in the first half, but the Redskins weren't done. A 30-yard pass interference call and a 26-yard completion to Brown had Washington on the move. With 14 seconds left, Theismann hit Garrett for 9 yards to the Miami 8. But Washington had no timeouts left and the seconds ticked off before the Redskins could get another play.

“I knew I made a stupid play,” said Theismann. “I thought with 14 seconds left, we could get the plays off in time to try a field goal.”

But the Redskins came up empty and went into the dressing room dragging just a bit.

“At the half I told them we have been down by more than this,” said Gibbs. “All of us felt we had a good shot at it.”

“We realized (at halftime) we played pretty good football in the first half," Bostic said. “Miami didn't really outplay us. They had the long kickoff return and the long pass play, but other than that, we felt we were in the game. We knew we were going to win it at halftime.”

For a fleeting moment, at least, you could have fooled Theismann. Moseley's second field goal, this one a 20-yarder, had narrowed Miami's lead to 17-13. With 2:42 left in the period, Mark Murphy intercepted a pass and Washington started from its 5-yard line. Riggins carried twice for 13 yards and then Theismann tried a pass. It was almost a disaster.

“It was a short pass to Charlie Brown in the left flat,” the quarterback recalled. Kim Bokamper, with a heavy rush, deflected the ball and it popped into the air. As it came down, it looked like Bokamper could grab it and head for the end zone. But there was Theismann, playing defensive back.

“I had my heart in my mouth when I saw the ball come out,” said Gibbs.

Had Bokamper caught the ball and taken it in, Miami would have had a 24-13 lead going into the fourth quarter. Instead, it was still 17-13.

Washington retained possession and drove to the Dolphins 43 before Theismann, throwing for the end zone, was intercepted by Lyle Blackwood at the 1-yard line. It amounted to a long punt and when the Redskins contained Miami, the Dolphins were forced to punt the ball back.

Washington took over at midfield and faced a fourth-and-1 at the Dolphins 43 with 9:01 to play. Gibbs decided to go for it with his bread and butter man.

The play was designed to provide blocks on just about all the Dolphins defenders. Only the cornerback was free. That was McNeal, but he slipped when the play began and by the time he recovered, Riggins was rumbling and ran right through his arm tackle, and after that it was daylight to the end zone.

Miami could not move the ball on its next possession and when Washington got the ball back, Gibbs went back to basics. Riggins carried on eight of the next 11 plays, a drive that ended with Theismann's second touchdown pass of the game, this one a 6-yarder to Brown.