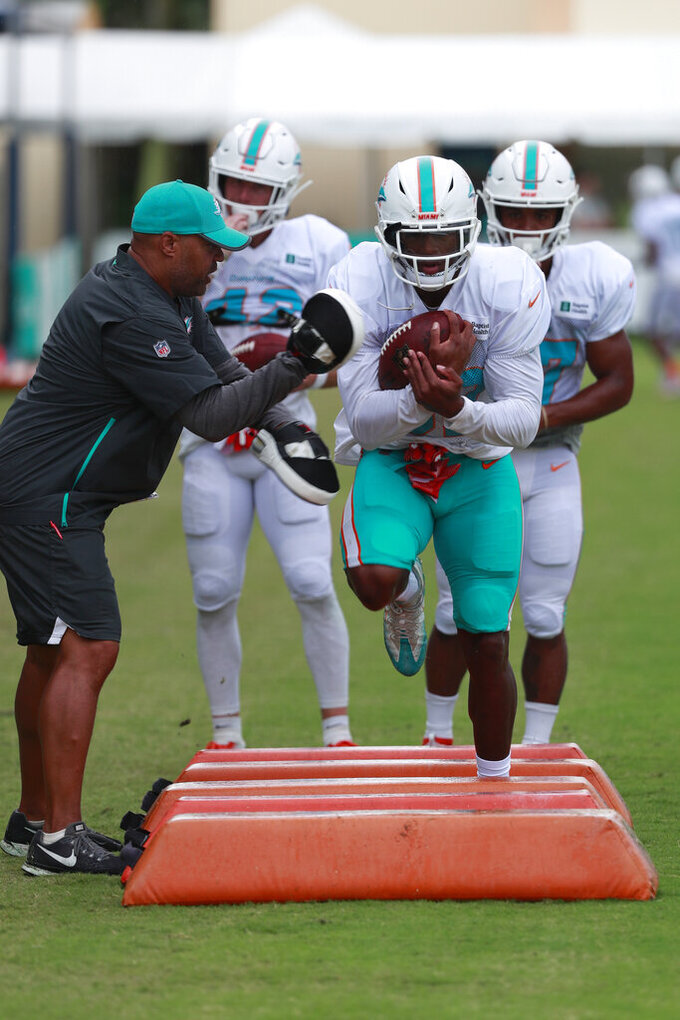 DAVIE, Fla. (AP) — Now that Ryan Fitzpatrick has pulled ahead in the battle for the quarterback job, the stiffest competition in the Miami Dolphins' backfield may be at running back.

Second-year pro Kalen Ballage took a lot of snaps with the first team during the first week of training camp, and he could unseat incumbent Kenyan Drake for the starting job.

Regardless of who earns the No. 1 designation, the two will likely share playing time and provide a contrast in styles. Ballage is listed 6-2 and 231 pounds, and the leaner, faster Drake is 6-1 and 211.

"Whenever you're talking about a rotation, that means you have some depth at the position," offensive coordinator Chad O'Shea said. "That's what excites me."

Competition for carries will heat up when the Dolphins scrimmage Saturday. Then come four exhibition games, giving Ballage and Drake plenty of chances to show first-year coach Brian Flores what they can do.

"Both those guys are good backs," Flores said Friday. "We expect to see improvement and production from both guys."

The starting job is open following the offseason departure of NFL active rushing leader Frank Gore to the Buffalo Bills. Drake and Ballage both say they're not focused on who becomes No. 1.

"I try to go out there and put myself in the best position to help this team win games," Drake said. "That's all I can do."

"If we're a winning team," Ballage added, "both of us are going to be able to make a whole bunch of plays and get a lot of individual stats. ... Kenyan's my brother. If you don't have competition, I don't think you get better. It's a battle every day in a healthy manner."

Flores has declared Fitzpatrick the leader over Josh Rosen in the quarterback competition between Dolphins newcomers. But the coach hasn't indicated who has the edge at running back, and stresses similarities between Drake and Ballage, rather than any differences.

"Both can run with power, both have speed, both have good vision, they're both explosive, they both do a good job in the passing game," Flores said. "I like that position."

Drake has mostly been a backup since he was drafted by the Dolphins in 2016. He has rushed for 1,358 yards in three seasons while averaging 4.7 yards per carry, and has caught 94 passes for 762 yards.

Ballage, a fourth-round draft pick last year, carried only 36 times as a rookie but showed his potential with a 75-yard touchdown run at Minnesota in Week 15, the longest run by a Miami rookie since 1977.

"He had some runs last year in practice that were pretty impressive, too," said running backs coach Eric Studesville, a holdover from the previous coaching staff. "That's what we say: When an opportunity presents itself, you've got to take advantage."

Drake is best remembered for his TD to cap the "Miami Miracle," a pass and double lateral that covered 69 yards on the final play to help the Dolphins beat the New England Patriots 34-33.

Drake has been mostly a third-down back, and has had more than 16 carries in a game only twice. Ballage averaged just 12 carries a game as a senior at Arizona State.

It's a toss-up which of them will get the most handoffs this season.

"What we're trying to do is figure out how we can utilize their skill sets and give us the best chance to win," Studesville said. "That's all we want to do."