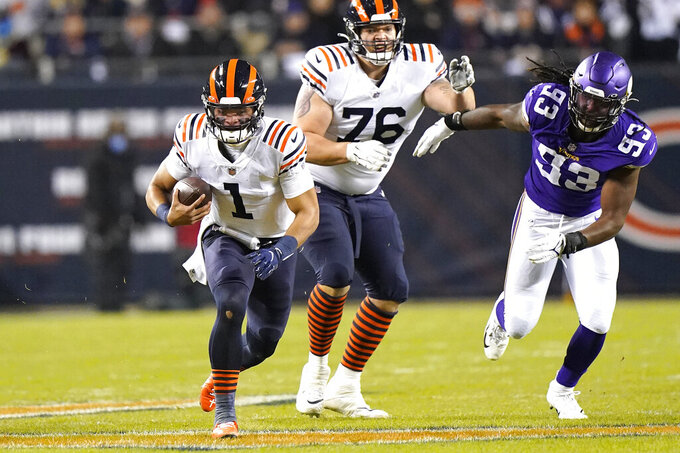 LAKE FOREST, Ill. (AP) — The Chicago Bears were eliminated from the playoffs with Monday night’s 17-9 defeat to the Minnesota Vikings, leaving only three games before the coaching regime of Matt Nagy could be judged.

In the meantime, they continue with games against Seattle, the New York Giants and Vikings again looking for offensive consistency and improvement behind rookie quarterback Justin Fields in an attempt to find meaning in a lost 4-10 season.

Fields completed 26 of 39 for 285 yards and a touchdown on the game’s last play, but his career-best 96.6 passer rating seemed meaningless after three turnovers and 91 yards in penalties proved disastrous.

Still, Fields sees positives in his game after his season passer rating hit its highest point since he became starter, at 73.2.

“I think outside the pocket, I think I do pretty well there,” Fields said. “I think when we, like, do no-huddle plays, I think our offense is very efficient doing that just because we know those plays. It’s literally no thinking. We line up and run those plays, and I know where all the answers are to whatever coverage they give us to the hurry-up offense. I think that kind of gets our offense in a rhythm.”

Part of the problem for the Bears is Fields, though. He makes rookie mistakes and leads the NFL with 12 fumbles. He also has more interceptions (10) than touchdown passes (seven).

Fields can’t be blamed for all of the penalties bogging down the offense. They kept the running game from getting going and put the Bears in third-and-long situations.

“Penalties can get you at the wrong time and it happened to us yesterday,” Nagy said. “That’s where going through this offense and stating the obvious, scoring three points the majority of the game will never win you a football game. It just doesn’t. It doesn’t happen."

The problem for the Bears is they’ve been trying to fix this all year. Fields offered an answer from his college days.

“We’re going to have to come up with something, a punishment during practice, run a lap or something," Fields said. "That’s what we did at Ohio State. If you jumped offsides you ran the whole lap, I don’t care who you are.

“They even had me running laps if I would do something wrong.”

Nagy expressed confidence the offense would look better in the future with Fields as QB.

“Every rookie in this sport wants it to happen overnight, and it takes time,” Nagy said. “Justin is built the right way, and you know, he’s going to be really, really good.”

Pass rush. Akiem Hicks returned from five weeks away because of a sprained ankle and had two sacks, while Robert Quinn raised his sack total to 16 on the year with two more. It left Quinn two short of breaking the team record of 17 1/2 set by Richard Dent in 1984.

Thomas Graham Jr. The rookie sixth-round draft pick from Oregon was on the practice squad all year, where he could have been claimed by another team if not protected. He had to play against Minnesota because of the COVID-19 outbreak and had perhaps a better game than any cornerback on the team has had all year by breaking up three passes, including one in the end zone. Graham’s draft stock fell after he opted out because of COVID-19, then he was cut and put on the practice squad.

“Me personally, I didn’t want to be on the practice squad,” Graham said. “I had to sit more."

Now he thinks it helped.

“I’m going against Allen Robinson, Darnell Mooney, Marquise Goodwin every day,” he said "They come to me, they tell me what I need to work on and stuff like that.”

Left tackle Teven Jenkins. He followed up a debut when he was called for four penalties by committing three penalties, including one for unsportsmanlike conduct and a holding play on a David Montgomery first-down run.

The only injury from the game reported by the Bears was a confirmed concussion for return man Jakeem Grant, who was just selected to the NFC team for the Pro Bowl. ... Nagy said defensive back Duke Shelley has been reinstated from the reserve/COVID-19 list.

5 — Unsportsmanlike conduct penalties on the Bears, including one on Matt Nagy against Minnesota. Two of those penalties extended drives after the Bears stopped third downs, allowing Minnesota to go on and score 10 of its 17 points.

The Bears travel to Seattle for a Sunday game against Russell Wilson and the struggling Seahawks.