Bears’ Trubisky expects to play against Giants if he’s ready 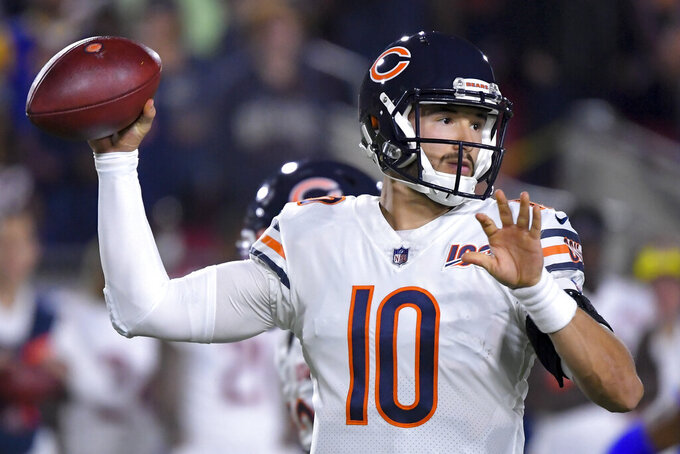 LAKE FOREST, Ill. (AP) — Chicago Bears quarterback Mitchell Trubisky said his right hip is improving and he expects to play Sunday against the New York Giants if it continues to get better.

The odds look good for him considering he was a full participant in practice Wednesday, after suffering a hip pointer three days earlier in the loss at the Los Angeles Rams on a sack near the end of the second quarter.

Trubisky got treatment at halftime after taking a knee from the Rams’ Michael Brockers as Troy Hill sacked him. He played most of the second half, but his hip tightened along the way. Chase Daniel worked the final drive and would likely make his sixth career start and second this season if Trubisky is unavailable.

“If I’m good to go, I’m going out there,” Trubisky said. “No restrictions. Going out there and play. And I just got to communicate with coach and the training staff with where I’m at and how I’m feeling. And take it day by day and just prepare to play.”

The Bears (4-6) have lost five of six and are just about out of playoff contention after winning the NFC North at 12-4 in coach Matt Nagy’s first season. They were banking on Trubisky to take another big step in his third season. But the No. 2 overall draft pick in the 2017 draft has struggled in a big way after throwing for 3,223 yards while making the Pro Bowl in 2018.

His completion percentage, yards per game and rating are all down from last season. He has nine touchdowns and four interceptions in nine appearances after throwing for 24 and 12 a year ago.

Chicago ranks 30th in offense, 28th in scoring and 27th in touchdowns. There’s plenty of blame to go around, with a shaky offensive line, a struggling run game, receivers dropping too many passes and the tight ends not contributing. Trubisky hasn’t helped his cause, either. And now, he’s dealing with a hip issue to go with a left shoulder injury that kept him out of a game last month.

But Nagy made it clear Trubisky remains the Bears’ No. 1 quarterback. And the team will not shut him down.

After tying a season high with three touchdown passes in a win over struggling Detroit, Trubisky was 24 of 43 for 190 yards with a TD and an interception against Los Angeles. He led Chicago on an 80-yard touchdown drive early in the third quarter. But the Bears punted on their next four possessions, managing just 30 yards and going three-and-out on three of those drives.

Nagy started noticing Trubisky was all arm on his throws as the hip tightened. Trubisky had trouble sitting on the sideline, and he said the flight home was “miserable” because he didn’t finish the game and the Bears lost again.

Even though it was another rough outing for the quarterback, Nagy insisted he has seen progress the past two weeks — particularly in his decisions as he goes through progressions. He mentioned Trubisky checking down to Allen Robinson for a 12-yard gain against Detroit on what was supposed to be a deep play.

But it’s been a frustrating season for the Bears and a painful one for Trubisky.

He got knocked out of a Week 4 win over Minnesota when his left arm got pinned under his body as he was dragged down on the opening possession. Daniel replaced him in that game and threw for 195 yards and a touchdown. The veteran had two TD passes and a pair of interceptions the following week in a loss to Oakland in London. Daniel also passed for 285 yards with a touchdown and two interceptions in an overtime loss at the Giants last season with Trubisky sidelined by a shoulder injury.

NOTE: The Bears promoted TE Jesper Horsted from the practice squad. He set career records at Princeton for receptions (196) and touchdown catches (28) from 2015-18.