Bengals look to build on opener, Bears try to bounce back 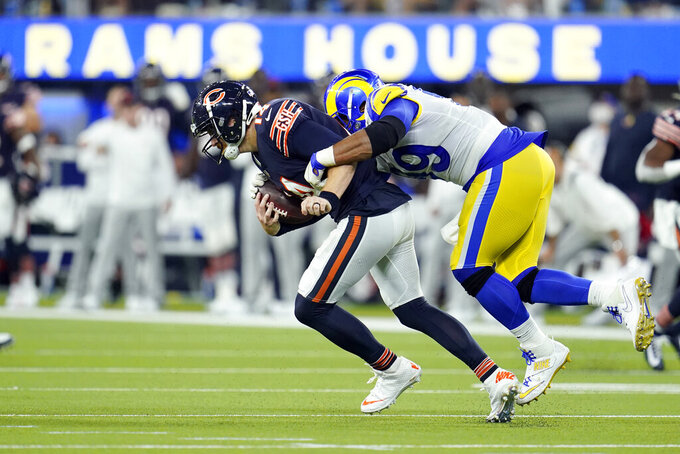 FILE - In this Sunday, Sept. 12, 2021, file photo, Chicago Bears quarterback Andy Dalton is hauled down by Los Angeles Rams defensive end Aaron Donald during the second half of an NFL football game in Inglewood, Calif. As Donald, now 30, closes in on the franchise's career sacks record this week, the three-time NFL Defensive Player of the Year says the only difference in his game with age is the recovery time necessary for minor injuries. (AP Photo/Marcio Jose Sanchez, File)

OPENING LINE: Bears by 4½, according to FanDuel SportsBook

TURNOVER DIFFERENTIAL: Bengals plus-1, Bears minus-2.

BENGALS PLAYER TO WATCH: QB Joe Burrow posted career-highs in passer rating (128.8) and yards per attempt (9.67) last week. He was 20 for 27 for 261 yards and two touchdowns. Not bad, considering the 2019 Heisman Trophy winner is playing on a surgically reconstructed left knee. He'll be facing a defense that got picked apart by Matthew Stafford. The Monsters of the Midway allowed touchdown passes of 67 yards to Van Jefferson and 56 yards to a wide-open Cooper Kupp.

BEARS PLAYER TO WATCH: RB David Montgomery started his third season on a solid note after a strong finish last season, running for 108 yards and a touchdown on 16 carries. He rushed for 598 yards over the final six games in 2020 and finished the season with 1,070.

KEY MATCHUP: Bengals RT Riley Reiff vs. Bears LB Khalil Mack. The Bears are counting on more production from Mack coming off a nine-sack season — his second straight in single digits. The three-time All-Pro was a nonfactor in the opener.

KEY INJURIES: Bengals came out of the opener with no significant injuries. ... Bears LT Jason Peters (quadriceps) and his backup, rookie Larry Borom (ankle) both left the opener.

SERIES NOTES: The Bears have won two straight against Cincinnati, including a 24-21 victory at Soldier Field in 2013. In 2017, Mitchell Trubisky completed 25 of 32 passes for 271 yards and a touchdown for Chicago. Andy Dalton threw for just 141 yards and got sacked twice for Cincinnati.

STATS AND STUFF: WR Tyler Boyd is the only current Bengal who has offensive statistics in a game against Chicago. He caught one pass for 15 yards versus the Bears in 2017. ... Burrow enters his 12th career game with 2,949 passing yards, just 51 shy of the 3,000 mark. ... At 22, Bengals rookie K Evan McPherson became the youngest player in NFL history to kick a game-winning field goal in overtime. His 33-yard boot as time expired gave Cincinnati a win over the Vikings. It was the first “walk-off” kick of his career at any level. ... RB Joe Mixon ran for 127 yards and a touchdown last week. ... Chicago did not have a completion longer than 19 yards in the opener. ... Dalton threw for 206 yards and was intercepted in the end zone on the game's opening drive in his Bears debut. The three-time Pro Bowler, who spent his first nine years with the Bengals, will face his former team for the second time. He won at Cincinnati playing for Dallas last season, throwing for two touchdowns in a 30-7 win. Dalton went 70-61-2 as the Bengals' starter and is their winningest quarterback. ... Rookie QB Justin Fields made the most of his limited time last week. The No. 11 overall pick was in on five plays, completing both of his passes for 10 yards and scoring from the 3 on his lone run. ... K Cairo Santos has made 28 consecutive field goals, counting last season's wild-card loss at New Orleans. He did not attempt one in the opener. ... Jimmy Graham became the sixth tight end with 700 receptions last week. The five-time Pro Bowler has 700 in 12 seasons with New Orleans, Seattle, Green Bay and Chicago.

FANTASY TIP: WR Ja’Marr Chase, the No. 5 overall draft pick, caught five passes for 101 yards and a touchdown in an impressive debut. And the Bears had several breakdowns in the secondary against the Rams.