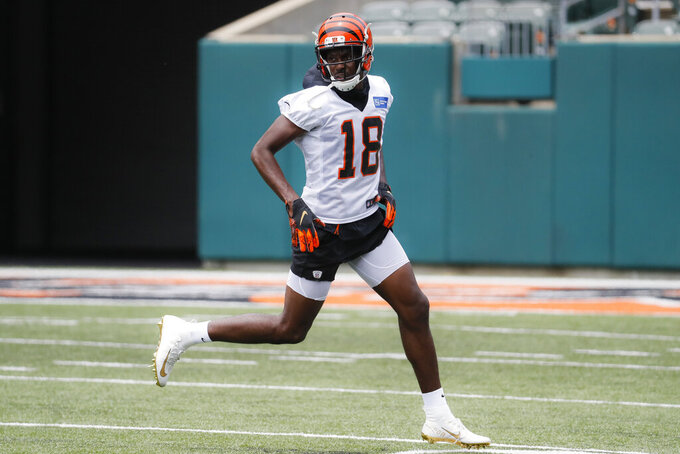 FILE - In this June 12, 2019, file photo, Cincinnati Bengals wide receiver A.J. Green participates during practice at the team's NFL football facility in Cincinnati. A.J. Green has started running for the first time since he hurt his ankle during the opening practice of training camp, an indication he's healing quickly from surgery. Green was out of his protective boot Wednesday, Sept. 11, 2019, for the first time since the injury. The Bengals expect him back during the first half of the season, although there's no specific target for his return. (AP Photo/John Minchillo, File)

CINCINNATI (AP) — A.J. Green stood at his locker with his left foot free of the black, protective boot that finally rested behind him, taking up space instead of limiting his stride.

The Bengals' top receiver took a noteworthy step Wednesday in his recovery from ankle surgery . He abandoned the protective boot and moved ahead with getting his left ankle back in shape. Also, he's started running lightly to get the ankle back in shape.

So far, his recovery has been pain-free.

"I'm way ahead of schedule where a normal person would be," Green said. "I'm only six weeks out and I'm already walking. You never know what the next two or three weeks are going to bring, to where I can start back putting on (football) shoes and actually running and doing some on-the-field stuff."

Green tore ligaments in the ankle during the first practice of training camp in Dayton, Ohio, on July 27. Cornerback Dre Kirkpatrick hit him while breaking up a pass during a 7-on-7 drill, causing the receiver to land awkwardly and roll the ankle.

The Bengals have kept him on the active roster so he can return as soon as he's ready, which is expected to be sometime in the season's first half. There's no specific week set as a goal.

"I'm here seven days a week getting treatment, trying to get back into shape," said Green, who has a lot of stiffness in the ankle. "I ran for the first time (Tuesday) and I feel good after the day of running, so it's just a process."

Green spoke with the media Wednesday for the first time since the injury, saying he wanted to wait until he was out of the boot. Green is coming off a toe injury that cost him roughly half of last season and required surgery.

When he landed awkwardly in Dayton after the bump from Kirkpatrick, Green knew he'd suffered another serious injury.

"I was feeling so good," he said. "My body felt amazing, my toe felt back to normal. And then I came down and just rolled my ankle. I never rolled my ankle before or had an ankle sprain, so I was like what the heck happened? I knew something was serious because it just swelled up on me real quick. It was just an unfortunate accident."

"I've played on worse fields than that, so it doesn't really matter about the field," he said.

Green flew with the team to Seattle for its opener, a 21-20 loss on Sunday. He was impressed with how first-year head coach Zac Taylor ran the offense.

"It's unbelievable how smart he is, the way he conducts our offensive meetings," said Green, a nine-year veteran. "I've never seen it before. How he makes in-game adjustments, like during halftime and during the game — he's on his little iPad going crazy. It's fun to watch."

Taylor was glad to have Green on the sideline providing encouragement to teammates.

"He warms my heart when he's around," Taylor said.

The Bengals piled up 429 yards, and Andy Dalton had career highs with 35 completions and 418 yards passing. The Bengals are eager to see what they can do when Green returns.

"He'll be coming back eventually and we'll accept him with open arms," Dalton said.

NOTES: Running back Joe Mixon twisted his left ankle in the second half at Seattle and sat out the rest of the game. He was held out of practice Wednesday and is listed day to day. Left tackle Cordy Glenn was still in concussion protocol after missing the opener. Tight end Tyler Eifert got a day of rest. ... Quarterback Jeff Driskel was waived off the injured reserve list with an injury settlement. He lost the No. 2 job to rookie Ryan Finley and hurt a hamstring during camp.