Big-ticket free agents could leave big holes behind them 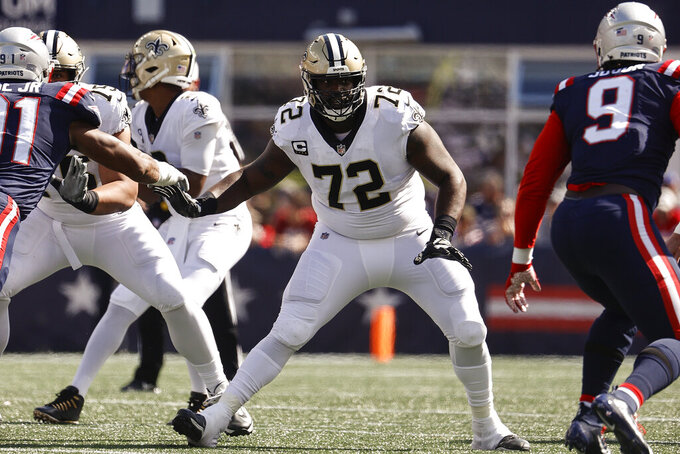 FILE - New Orleans Saints offensive tackle Terron Armstead looks to block against the New England Patriots during an NFL football game Sept. 26, 2021 in Foxborough, Mass. New Orleans usually finds a way to keep its coveted free agents but the cap-strapped Saints might not be able to pull it off with Armstead. The three-time Pro Bowler is one of the top pass blocking left tackles and would leave a big void on a New Orleans offense with several question marks. (AP Photo/Winslow Townson, File)

The start of the NFL free agency period next week is the first big chance for teams to make major moves to fill significant holes on their rosters.

But for nearly every big-ticket addition that brings optimism to a fan base in hopes of an overhaul — similar to what Cincinnati did last year to build a defense capable of getting the Bengals to the Super Bowl last season — another team will be dealing with a void.

It could be playoff teams like the Super Bowl champion Rams or the Arizona Cardinals dealing with the potential loss of star pass rushers. Perhaps the Patriots or Chiefs looking at holes in the secondary. Maybe teams like New Orleans or Washington facing questions on the offensive line. Regardless, the ability to deal with these potential losses could determine who has success in 2022.

Here's a look at some of the key free agents that could leave their old teams searching for replacements if they happen to sign elsewhere:

New Orleans usually finds a way to keep its coveted free agents, but the cap-strapped Saints might not be able to pull it off with Armstead. The three-time Pro Bowler is one of the top pass-blocking left tackles and would leave a big void on a New Orleans offense with several question marks. Armstead has missed significant time with injuries over his career and played only eight games last season because of elbow and knee injuries.

Jones bounced back from an injury-plagued 2020 season to make 10 1/2 sacks in 2021 for his seventh double-digit sack season. Only 12 players have had more seasons with at least 10 sacks and Jones' 107 1/2 for his career lead the NFL since he made his debut in 2012. Arizona has Markus Golden locked up for one more season on a reasonable deal but has few proven options beyond that besides soon-to-be 33-year-old J.J. Watt, who has 10 sacks the past three seasons.

Miller provided a big boost to the Super Bowl champions after being acquired during the season for a pair of second-day draft picks. Miller had five sacks in eight games for the Rams and added four more in the playoffs as one of the key pieces of a championship defense. Miller could choose to return to Denver, which would force the Rams to find another edge rusher to team with Leonard Floyd.

New England opted against using the franchise tag on one of the top man-to-man cornerbacks in the league, leaving an attractive option for other teams. Jackson entered the league as an undrafted free agent in 2018 and leads the NFL with 25 interceptions since then. New England already lost star cornerback Stephon Gilmore in a trade and now could be forced to replace the other half of what had been one of the top coverage duos in the league.

The “Honey Badger" has been a key part of the Kansas City defense since signing as a free agent in 2019 with 13 interceptions, four fumble recoveries and the versatility to play in several roles. But after using the franchise tag on left tackle Orlando Brown Jr. to go with big-ticket deals already with several other stars, there might not be enough cap room for the Chiefs to keep Mathieu. His playmaking ability could provide a big boost to another contender and leave a major hole in Kansas City.

One of last season's best free agent bargains could hit the open market again this season with the Packers up against the cap after using a franchise tag on Davante Adams and Aaron Rodgers returning. Campbell figures to get a lot more than the $2.5 million he earned last season when he was an All-Pro in Green Bay. Campbell is a three-down linebacker and durable, playing 16 games in each of the last five seasons, missing only a meaningless Week 18 game last season.

Scherff is a top interior offensive lineman and should hit the open market after Washington used franchise tags to keep him the past two seasons. Scherff is strong in both the run and pass game but hasn't played a full season since 2016 because of several mostly minor injuries. New Commanders QB Carson Wentz has struggled when he hasn't had good protection in his career, so Washington will need to find a replacement if Scherff leaves.