Bills aim to snap series skid vs. Saints on Thanksgiving 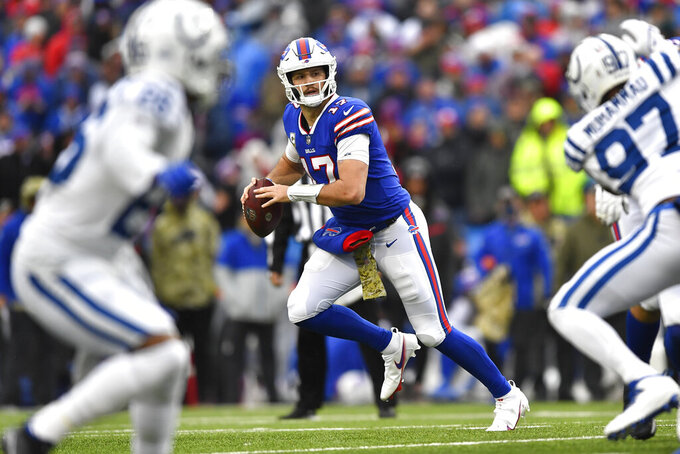 Buffalo Bills quarterback Josh Allen (17) looks to pass during the first half of an NFL football game against the Indianapolis Colts in Orchard Park, N.Y., Sunday, Nov. 21, 2021. (AP Photo/Adrian Kraus)

BETTING LINE: Bills by 6, according to FanDuel SportsBook.

TURNOVER DIFFERENTIAL: Bills plus-10; Saints plus-3.

BILLS PLAYER TO WATCH: QB Josh Allen has been inconsistent in attempting to carry too much of the offensive load this season. Five of his eight interceptions and both of his lost fumbles have come in losses. He’s also topped 300 yards passing just four times. Including playoffs, Allen’s career record is 17-17 when turning over the ball and 20-16 with 30 or more pass attempts.

SAINTS PLAYER TO WATCH: DE Cameron Jordan has a sack in four of his past five games, including one last week against Philadelphia's Jalen Hurts.

KEY MATCHUP: The Saints' 13th-ranked running game, which averages about 118 yards per match, could have a productive day if DT Star Lotulelei misses a third game while on the Reserve/COVID-19 list. Buffalo allowed Colts RB Jonathan Taylor to score five times, including four times rushing. The Colts’ 264 yards rushing were the most Buffalo has allowed since giving up 298 in a 47-10 loss to New Orleans on Nov. 12, 2017. But New Orleans also has several injured running backs.

SERIES NOTES: Buffalo has lost five straight meetings, with the Saints scoring six TDs rushing the previous time the teams played. The six TDs rushing were the most allowed by Buffalo in team history.

STATS AND STUFF: Bills coach Sean McDermott is 0-1 vs. New Orleans. ... Buffalo has not won in the Superdome since Dec. 27, 1998. ... Allen was intercepted twice last week but has passed for at least two TDs in eight of his past nine games. Allen completed 19 of 24 passes (79.2%) for 231 yards and a TD without an interception in his only career Thanksgiving start at Dallas in 2019. ... WR Stefon Diggs had a season-high two TDs receiving last week and has a TD catch in his past two games. ... WR Emmanuel Sanders played for the Saints last season. In his last game against the Saints, Sanders had seven catches for 157 yards a TD with San Francisco on Dec. 8, 2019. ... TE Dawson Knox had a season-high six catches for 80 yards last week. ... CB Tre’Davious White is a Louisiana native who played for LSU. ... White had seven tackles in Week 11. .. LB Matt Milano led the Bills with nine tackles and had a tackle for loss in his fourth straight game last week. ... Saints coach Sean Payton is 3-0 against Buffalo. ... QB Trevor Siemian is 0-3 as a Saints starter this season but has at least two TD passes in each of his three starts. ... Ingram had 113 scrimmage yards (88 rushing, 25 receiving) last week. ... WR Tre’Quan Smith had five catches for a team-high 64 yards last week. ... WR Marquez Callaway had his sixth TD receiving this season at Philadelphia and has a TD catch in three straight games. ... QB Taysom Hill had two TDs (one rushing, one receiving) in his last game on Thanksgiving on Nov. 28, 2019 at Atlanta.

FANTASY TIP: Diggs has shined in his two previous games against the Saints, catching 17 passes for 212 yards and three TDs while with Minnesota.