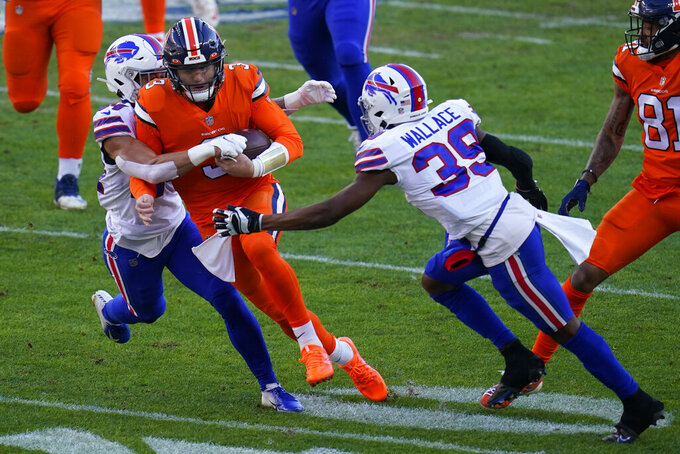 Denver Broncos quarterback Drew Lock, center, is brought down by Buffalo Bills cornerback Levi Wallace (39) and outside linebacker A.J. Klein during the first half of an NFL football game Saturday, Dec. 19, 2020, in Denver. (AP Photo/Jack Dempsey)

DENVER (AP) — Donning gray caps that declared them AFC East champions for the first time since 1995, the Buffalo Bills acted like this was old hat.

“We’re going to enjoy it on the flight back home, but we know the job ain’t done yet,” defensive end Jerry Hughes said after the Bills’ 48-19 dismantling of the Denver Broncos officially ended New England’s 11-year reign atop the division.

“We still have a lot more to accomplish,” added Hughes, who contributed to the Bills' biggest blowout of 2020 with a 21-yard fumble return for a touchdown just 17 seconds after Josh Allen’s second TD run.

Sporting blue T-shirts that read “Won but not done,” the Bills (11-3) acted like the Patriots did all those years when they dominated the division and AFC East titles were mere stepping stones.

“It’s great that we’re able to do it the first time in 25 years,” Allen said. “To be the team and to be the quarterback on the team that does it, obviously feels really good. At the same time, that’s not our end goal. We set out to do this in order to get the chance to do what we really want to do, and that’s to win a Super Bowl championship."

No disrespect to those celebrating, of course.

“I know our fans and Bills Mafia is probably going crazy right now,” Allen added. “But there’s still a lot on the table.”

But he, too, was looking beyond winning a division title.

“We have more work to do,” McDermott said.

Allen, who wasn't even born the last time the Bills won the division in 1995, ran for two touchdowns and threw for two more against the team that bypassed him in the 2018 NFL draft despite his starring at windy Wyoming, just 2½ hours north of Denver.

Asked if the snub by Broncos general manager John Elway, who chose linebacker Bradley Chubb instead, made this milestone moment any more meaningful, Allen responded, “I'm where I'm supposed to be.”

While the Bills have turned things around in Allen's three seasons, the Broncos (5-9) continue to founder. This loss secured their fourth consecutive losing season, something that hadn't happened in Denver since the franchise's futile early days in the 1960s and early '70s.

They also became the first team ever to go five years without making the playoffs following a Super Bowl title.

Allen threw for 359 yards, hitting Stefon Diggs 11 times for 147 yards before he suffered a foot injury in the fourth quarter, and Cole Beasley eight times for 112 yards.

Allen also tied Jack Kemp’s record of 25 career touchdown runs with his second TD scamper, a 1-yard keeper to the right that was set up by Andre Roberts’ 55-yard return of Taylor Russilino's short second-half kickoff.

After Allen’s 1-yard TD run to start the second half, cornerback Tre’Davious White strip-sacked Drew Lock on Denver’s first offensive play. Defensive end Jerry Hughes scooped up the ball at the 21 and weaved his way through several Broncos to make it 35-13.

Allen dismantled Denver’s makeshift secondary that had lost five cornerbacks in two weeks, picking on De'Vante Bausby all afternoon while completing 28 of 40 passes. Rookie cornerback Michael Ojemudia held his own but was ejected in the third quarter for slapping Bills rookie receiver Gabriel Davis.

Allen threw touchdown passes to Dawson Knox and Jake Kumerow, who became the 13th Bills player to catch a TD pass, tying an NFL record held by seven other teams.

Lock hit tight end Noah Fant with a 6-yard touchdown toss with 5 seconds left in the first half, but Russolino missed the extra point. He also missed the 51-yard field goal attempt way to the right on Denver’s opening drive.

“I thought offensively we had a pretty good first half there,” Broncos coach Vic Fangio said. “If we make the field goal and extra point for 17 points, you’re looking at a tight game.”

The Broncos turned to Russolino, whose vagabond career included stops in the XFL, the Canadian Football League and even the Chinese arena league after Brandon McManus went on the COVID-19 reserve list.

In addition to his short second-half kickoff to the Buffalo 4 that Roberts returned to Broncos territory, Russolino missed a 51-yard field goal and two extra points on a windy day that didn’t adversely affect Bills kicker Tyler Bass, who made both field goal attempts and all six extra points.

“All four of those were disappointing,” Fangio said, “because he had a really good day in practice the other day when he was practicing and I was encouraged by him. There was some wind out there, but it didn’t bother their kicker. Yeah, I thought he was going to kick better than he did.”

Bills: Along with Diggs, PR Andre Roberts injured his lower back in the third quarter, and OL Daryl Williams left with a groin injury. A person with direct knowledge of the injury told The Associated Press that Diggs’ foot was fine. The person spoke on condition of anonymity because McDermott provided no injury updates after the game, when he said he was “just praying that everyone turns out to be healthy.”

Broncos OLB Bradley Chubb (ankle) and RB Royce Freeman (hip) were hurt in the second half.

Bills: visit the New England Patriots for a Monday night game on Dec. 28.

Broncos: visit the Los Angeles Chargers, who they rallied from a 21-point deficit to beat on Nov. 1 with a touchdown as time ran out.