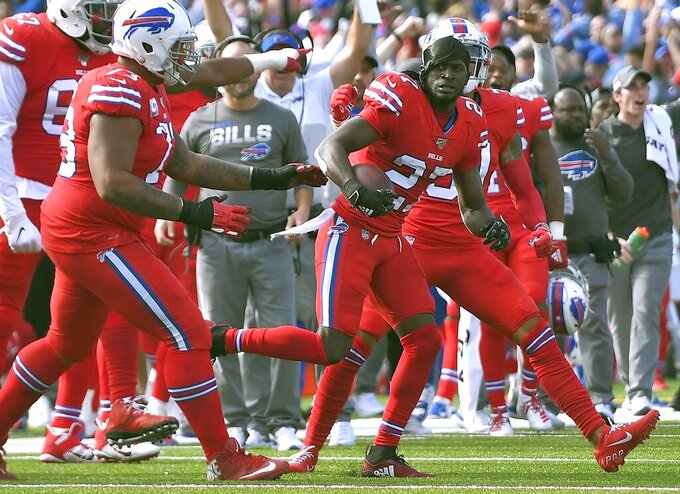 ORCHARD PARK, N.Y. (AP) — Cornerback Tre'Davious White occasionally enjoys parading around the Buffalo Bills facility in goaltending gear while claiming to have been the best hockey player in his native Louisiana history.

It's all fiction, including The Tre'Davious White Goalie Academy, where he supposedly taught Buffalo Sabres starter Carter Hutton all he knows. White, in fact, was unfamiliar with hockey until last year, when he became a big fan of Hutton while attending his first NHL game.

The outing was filmed by the team's promotional department, and prompted the Pegula-owned Bills and Sabres to produce a "mock-umentary" in which White proudly says: "I've never allowed a goal."

All joking aside, White was immediately captivated by Hutton because he can appreciate how a goalie's role is no different than his.

"Ultimately, I don't want to be embarrassed out there. So, when you're the last line of defense, and somebody catches the ball on you, that's all everybody's going to talk about, right?" White said. "Just like a touchdown or when somebody scores a goal, you want to try to defend the goal, and the team is depending on you to try to save the day."

Preferring pigskins over pucks, the third-year player has generated an impressive save percentage for making key stops particularly in the clutch.

On Wednesday, with Buffalo (5-1) preparing to host Philadelphia (3-4) this weekend, White earned his first AFC defensive player of the week honors.

It came after he forced two momentum-changing second-half turnovers, allowing Buffalo to rally from a five-point fourth-quarter deficit in a 31-21 victory over winless Miami last weekend.

"I feel it's just the first step," said White, who has on several occasions voiced his objective of becoming the NFL's top cornerback. "I always felt like those accolades would come if the team wins. And so far we're winning and people are paying attention. I mean, as long as we win, that's all that matters."

Both turnovers led directly to Buffalo touchdowns, starting with White's diving interception of Ryan Fitzpatrick's pass at the Buffalo 2 to end a 16-play third-quarter-opening drive. Two series later, White punched the ball out of receiver Preston Williams' hands, with the fumble recovered by teammate Jerry Hughes.

Of White's 13 career takeaways (including nine interceptions), 12 have come in the second half.

In Week 3, he clinched a 21-17 win over Cincinnati by intercepting Andy Dalton's pass that tipped off Hyde's hands at the Buffalo 10 with 12 seconds remaining.

It was no different during his rookie season in 2017.

White sealed a 16-10 win at Kansas City by intercepting Alex Smith's pass at the Buffalo 27 with 1:10 remaining. He also forced and recovered Adam Humphries' fumble with 2:28 left to set up Stephen Hauschka's 30-yard game-deciding field goal in a 30-27 win over Tampa Bay.

"What he did yesterday was very similar. But we've seen it in his three short years here: He finds a way to come up with big plays in some tough moments," Frazier added. "There's no situation too big for him, no circumstance that scares him."

According to the NFL's Next Gen Stats, quarterbacks have completed 44.8 percent of their attempts thrown in White's direction, and he leads the league with a 26.6 defender passer rating based on a minimum 20 targets this season.

From Shreveport, Buffalo's 2017 first-round draft pick honed his skills at LSU, where White practiced against a group of receivers that included Odell Beckham Jr. and Jarvis Landry.

White drew on those experiences when picking off Fitzpatrick's pass intended for Isaiah Ford, who broke off his route and cut to the right sideline.

No different than a goalie.

Hutton was impressed by White's performance against Miami, and gets a big laugh out of the hockey-related videos the Bills have produced.

Hutton, off to a 6-0 start this season, winked in saying White hasn't taught him everything about goaltending.

"No, no. He taught me a lot but not everything," he said.

White's not giving up his day job just yet, though he's prepared to pull on his gear in a pinch.

"If the Sabres need an emergency goalie, I'm up for it if coach (Sean) McDermott will let me," White said.