Brees breezes for TD in only series, Saints top Jets 28-13 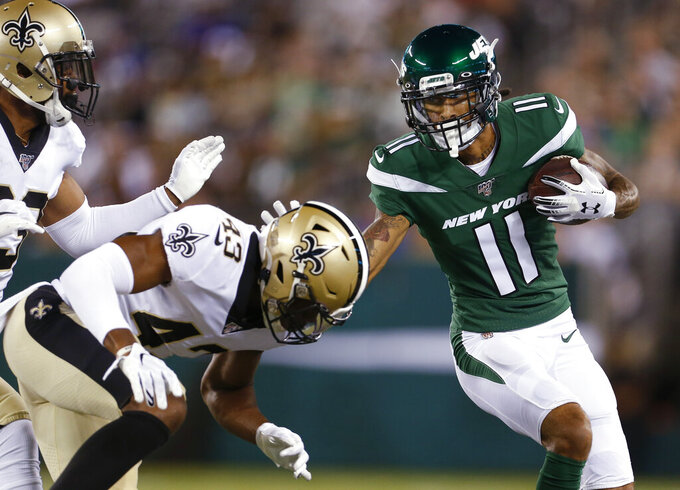 EAST RUTHERFORD, N.J. (AP) — Drew Brees got in, marched down the field and got out.

It was a breezy preseason debut for Brees, who threw a 19-yard touchdown pass to Michael Thomas to cap his only drive, and the New Orleans Saints defeated the New York Jets 28-13 on Saturday night.

"Any time you can go down and get points, get a touchdown, that's good," Brees said. "Felt like it was pretty efficient, for the most part. Wasn't a big sample, right? I don't even know how many total plays we ran."

"I was hoping to get 15 or 20," Brees said, "but I know there was a plan to pull a few of us out after a short while and get some other guys work."

Brees didn't take a snap in the Saints' first two exhibition games, but Sean Payton gave the 40-year-old quarterback a brief regular-season warmup in this one.

Brees finished 4 of 6 for 68 yards and was done, along with the rest of the offensive starters, and was replaced by Teddy Bridgewater.

A sluggish start included Ty Montgomery fumbling on the first drive and Darnold taking a hard shot from Trey Hendrickson to end his fourth possession.

"We were not very good," coach Adam Gase said. "After the fumble, we lost our minds a little bit."

The starting offense got going against the Saints' backup defense on the Jets' fifth possession. On third-and-5 from the Jets 40, Darnold connected with Robby Anderson for a 41-yard gain. After two runs by Montgomery and a defensive holding call on Terrell Williams Jr. put the ball at the Saints 2, Darnold threw a pretty swing pass to Montgomery for a touchdown that cut the Jets' deficit to 10-7 with 8:22 left in the first half.

"I didn't like how we played in the first quarter," Darnold said. "In the second quarter, we kind of found our rhythm and then were out."

Darnold was 8 of 13 for 97 yards and the score before he was replaced by Trevor Siemian.

"We wanted them to play the whole first half," Gase said of the starters. "It just felt like after we scored the touchdown it was the right time, kind of finish that group on a good note."

Saints rookie wide receiver Deonte Harris returned a punt 78 yards for a touchdown with 7:27 left, giving New Orleans a 23-13 lead. Harris, out of Assumption College, avoided a diving tackle attempt by punter Matt Darr before sprinting into the end zone.

"I knew if I made one person miss, I would be off to the races," Harris said. "It's an unbelievable feeling."

There were 31 accepted penalties — 16 on the Saints for 142 yards, and 15 on the Jets for 128 yards. New York's final penalty of the night was a holding call in the end zone on offensive tackle Eric Smith, resulting in a safety late in the fourth quarter.

Kalil was expected to make his debut with the team, but the team decided to have him sit out while he continues to get into football shape and learn the playbook. Jonotthan Harrison started again in his place.

Kalil, who played 12 seasons with Carolina, came out of retirement earlier this month and signed a one-year, $8.4 million deal with the Jets.

"(Last) Sunday night was his first night in pads, so he's only had really three practices," general manager Joe Douglas said before the game. "So, we felt the smart thing to do was to hold him out. We'll re-evaluate it next week. Again, we're 15 days away from the opener, so we feel good that's he's going to have plenty of time to be ready for Week 1."

Bridgewater was 15 of 26 for 143 yards before giving way to Taysom Hill in the third quarter. The do-it-all Hill ran for what appeared to be a go-ahead 8-yard touchdown late in the third, but it was wiped out by a holding call on Patrick Omameh. The Saints settled for a 38-yard field goal by Wil Lutz that put New Orleans up 16-13 with 2:36 left in the quarter. ... Lutz was also good from 39, 40 and 34 yards, but was wide left on a 43-yard attempt.

Jets: S Brandon Bryant suffered a head injury in the third quarter after being called for unnecessary roughness for leading with his helmet on a play.

Saints: At home vs. Miami on Thursday night.

Jets: At home vs. Philadelphia on Thursday night.

This story has been corrected to show that the Jets play at home, not on the road, next week.