Bridgewater sorry for not trying on season-defining play 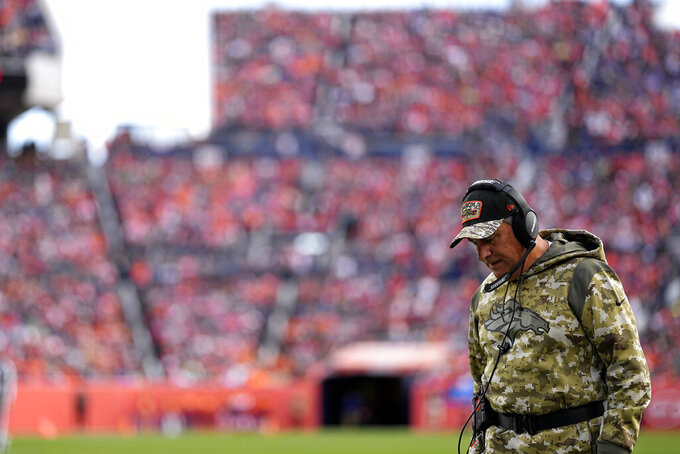 Denver Broncos head coach Vic Fangio walks the sidelines during the first half of an NFL football game against the Philadelphia Eagles, Sunday, Nov. 14, 2021, in Denver. (AP Photo/Jack Dempsey)

The Broncos quarterback said he actually appreciated coach Vic Fangio calling him out in a team meeting Monday for choosing the role of bystander over barrier as the Eagles cornerback swept past him at midfield for the score that sealed Philadelphia's 30-13 upset.

“Coach pointed it out that hey, my effort had to be better there,” Bridgewater recounted, "and I totally agree. That's not the type of tape I want to put out there.”

Bridgewater said that in the heat of the moment he thought funneling Slay back inside was the right thing to do, but watching in slow motion made him realize why he's been getting criticized on social media ever since.

“We've got guys diving, trying to make the tackle, and I just needed to lay it all out for the guys in that moment," Bridgewater said, adding he hopes the play doesn't come to define him.

It certainly epitomizes Denver's discordant season and the Broncos' inability to make a move in the wide-open AFC West.

Incapable once more of navigating their way out of an interminable funk that's stretched into its sixth season, the Broncos showed they couldn't handle success very well, either.

They failed to parlay their clobbering of the Cowboys in Dallas a week earlier into a crucial win over a 3-6 Eagles team, which would have tied them with the Chiefs atop the division.

Instead, they stumbled into their bye at 5-5 following their third home loss by double digits this season and seventh in the past two seasons. Never before in the 62-year history of the franchise have the Broncos had that many home blowouts in a two-year span.

With the Broncos going in for the tying touchdown, Gordon fumbled after gaining the first down on fourth-and-1 from the Eagles 23.

“It sucks because this was a winnable game," Gordon said.

So were the losses to the Steelers, Raiders and Browns last month, and there doesn't appear to be many of those left on the schedule that features just one losing team and five division games.

“There’s still a lot of football left, and there are still a lot of games left," Gordon said. “We can still win the division. It’s still up in the air. It’s not over.”

Safety Justin Simmons had his fourth interception of 2021 and 20th of his career. Patriots CB J.C. Jackson is the only other NFL player with at least four interceptions in each of the past three seasons.

Tom McMahon’s special teams units. The weekly weak link allowed a blocked field goal one week after allowing a blocked punt, missing two kicks and allowing a 54-yard kickoff return, all of which prompted McMahon to say, “We can't let that happen, especially when your offense is dominating and your defense is dominating.”

It's even more critical to have a clean performance when the offense and defense are struggling, but the only thing McMahon's units can be counted on is to make monumental mistakes.

Asked if he'd consider changing coordinators during the bye, Fangio said no. "Both Tom and I have to do a better job of coaching the special teams,” he said.

DE Dre'Mont Jones had a strip sack of Jalen Hurts and gave the most honest assessment postgame. When asked about allowing 214 rushing yards, Jones said, "I’ll call it a combination of us not executing and probably coaching. Pure and simple.”

Fangio's defense. While all the talk was about QBs coach Mike Shula calling the plays for offensive coordinator Pat Shurmur, who's out with a COVID-19 infection, the Eagles had a whopping 15 plays in which they gained 10 yards or more.

Rookie Baron Browning (back) is the team's latest ailing inside linebacker.

20 career fumbles by Gordon, 15 of which the opponent recovered. Only Adrian Peterson (48) and Elliott (22) have more among active running backs.

Regroup over the bye, get over the COVID-19 outbreak that began with QB2 Drew Lock a week ago and now includes four players, a coach and a practice squad member, and make a push for the playoffs or the entire coaching staff could be looking for work come January.