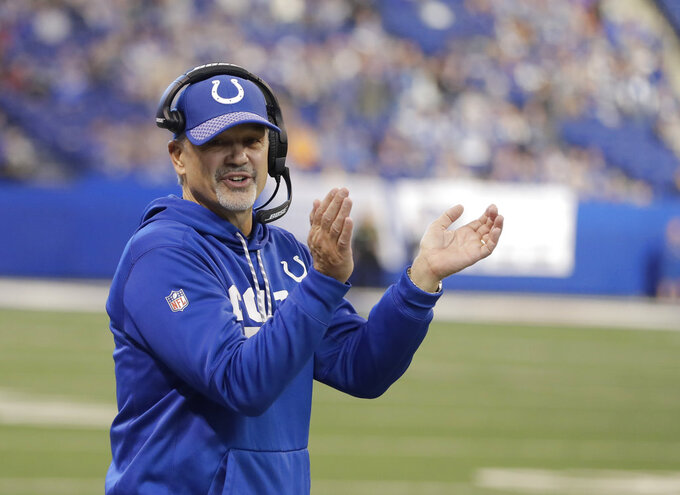 Elway fired Vance Joseph after he went 11-21 in two seasons. Joseph is interviewing for the Cincinnati Bengals' opening Thursday and Friday. Joseph was a former assistant to longtime Bengals coach Marvin Lewis, who was also among the eight head coaching casualties of the 2018 season.

Pagano was head coach in Indianapolis from 2012-17. He posted a record of 53-43 in the regular season and 3-3 in the playoffs. After posting 11-5 records in each of Andrew Luck's first three seasons and leading the Colts to the AFC championship game in 2014, Pagano won eight, eight and four games (with Luck injured) in his final three seasons.

Pagano has worked with Broncos special teams coordinator Tom McMahon, who declined to comment last week on Pagano's coaching credentials given his possible return to the NFL after a year's absence. But he did vouch for Pagano's character.

"I'll tell you this, Coach, as a human being, is one of the greatest men I've ever been around in my life," McMahon said. "As a man, nothing like him."

Unlike the last two hires, Gary Kubiak in 2015 and Joseph in 2017, Elway doesn't appear to have a preferred candidate going into his latest head coaching search.

Elway agreed with star cornerback Chris Harris' damning assessment that the Broncos need to modernize their offense and their defense to catch up to the NFL's run-pass option trend that teams such as the playoff-bound Chiefs, Ravens, Rams and Eagles have already integrated into their playbooks.

That doesn't mean Elway necessarily prefers a young coach with offensive roots, as evidenced by his short list that includes three coaches that are about his age — 58 — and a mix of offensive and defensive expertise.

"I want them to be great on one side of the ball and great at what they do, whatever that position may be, whether it be a coordinator or whatever they've done," Elway said. "I look for greatness on that side. For me, I look for experience. I want the guys that understand the game, they understand X's and O's but also have the ability to lead men. That's a big part of it in today's world.

"We're going to try to find that guy with that 'it' factor, that can make those right decisions and also lead men. We're confident that we can find that guy."

Vacancies with the Packers, Browns, Jets and Cardinals are seemingly much more appealing because those teams all have their franchise quarterback in place. Denver has the middling Case Keenum at quarterback, a public ownership squabble, a three-year playoff drought, holdovers from Joseph's staff still under contract and a demanding general manager and fan base short on patience.

Still, Elway insists the Broncos' gig is as enticing as ever.

Elway said he has faith in the Bowlen family trust that's run the team since Pat Bowlen stepped down several years ago to battle Alzheimer's. And he said the Broncos provide everything a head coach needs to win, including state-of-the-art training facilities and a front office willing to make the moves necessary to upgrade the roster.

"I think the right kind of guy wants to come into a situation like this because he knows what the expectations are and what our expectations have been," Elway said. "Therefore, I think guys want that opportunity. They want to come into a spot where they know it's about football and about winning games.

"Given that opportunity, the resources behind him that we can give him, I think it's a great job."