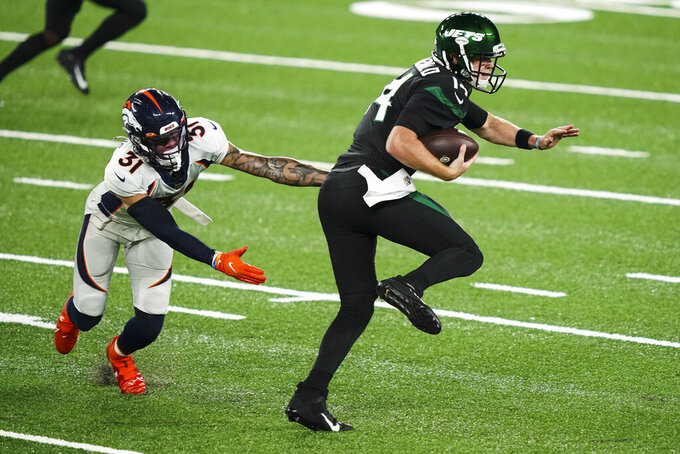 New York Jets quarterback Sam Darnold (14) breaks a tackle attempt by Denver Broncos' Justin Simmons (31) as he rushes for a touchdown during the first half of an NFL football game Thursday, Oct. 1, 2020, in East Rutherford, N.J. (AP Photo/John Minchillo)

EAST RUTHERFORD, N.J. (AP) — It was sloppy and downright ugly at times. It was a victory, though, and Vic Fangio and the Denver Broncos are relieved to finally get one — no matter how it looked.

Melvin Gordon sealed the Denver Broncos’ first win of the season with a 43-yard touchdown run with 1:48 remaining, and the defense made just enough plays in the fourth quarter to beat the bumbling — and still winless — New York Jets 37-28 on Thursday night.

“Winning has cured more ills than penicillin," said Fangio, who was feeling the heat along with his team while facing the prospect of a second straight 0-4 start.

But the Broncos (1-3) came out on top in a penalty-filled but strangely entertaining game between two of the NFL's worst teams.

“It just makes you hungry for the next win,” said Bradley Chubb, who had 2 1/2 of Denver's six sacks.

And this one swung with a late mistake by New York's defense, which was plagued by bad plays all night.

On third-and-6 and the Jets leading by one in the fourth quarter, Quinnen Williams sacked Brett Rypien — but grabbed the quarterback’s helmet and prolonged the drive. Seven plays later, Brandon McManus kicked a 53-yard field goal to give Denver a 30-28 lead with 3:08 remaining.

The Jets couldn’t do anything on their next possession, and Sam Darnold was sacked by Chubb on fourth-and-3 at the two-minute warning. Gordon ended New York's chances with his long rumble that sent the Jets to consecutive 0-4 starts for the first time in franchise history.

The heat on coach Adam Gase's seat will surely be turned up after this latest embarrassment, but no coaching change is imminent. New York was penalized 11 times, including six personal fouls.

“We had multiple chances to get off the field,” Gase said. “We beat ourselves. The penalties are just ... they're brutal.”

Fangio directed some of his players to head to the locker room as the game ended, and the coach didn't meet with Gase for the customary postgame handshake.

“There was just a couple of personal fouls there at the end and our sideline was getting (ticked) off about it,” Fangio said. “I just wanted to avoid any confrontation at the end of the game and having it get ugly there.”

The Jets were actually in position to win after Pierre Desir, having a rough game in coverage, redeemed himself a bit by picking off Rypien — whose arm was hit by Tarell Basham as he threw — and returning it 35 yards for a touchdown. Darnold’s pass into the end zone on the 2-point try was incomplete, leaving the Jets trailing 27-25 with 10:45 remaining.

Brian Poole intercepted Rypien, making his first NFL start, on the Broncos’ next possession, giving the Jets the ball at Denver’s 44. That led to Sam Ficken’s fifth field goal, a 36-yarder that put New York ahead 28-27 with 6:28 remaining.

"It's definitely frustrating to come out here and lose another one," said Jamison Crowder, who had seven catches for 104 yards in his return after missing two games with a hamstring injury.

Rypien, the nephew of 1992 Super Bowl MVP Mark Rypien, became the first quarterback to win his first start with three interceptions since San Francisco's Jim Druckenmiller beat the St. Louis Rams 15-12 in 1997. Rypien finished 19 for 31 for 242 yards and two TDs, along with the three picks.

Rypien put the Broncos on top 10-7 in the second quarter with a 48-yard throw to Jerry Jeudy. The rookie wide receiver reached in front of Desir, snatched the football and then walked into the end zone for his first NFL TD. That drive was kept alive by another defensive penalty when Williams was called for roughing the passer.

“Well, it was up and down,” Fangio said of Rypien's night, declining to commit to him starting the next game. “I thought there was some good things. We hit some big plays, which is always important. Throwing three interceptions, you’re not going to win many times in this league. But we found a way to win tonight in spite of that.”

Darnold gave the Jets their first lead of the season with a dazzling run. He wriggled out of a sack attempt by Alexander Johnson, took off up the middle, sidestepped Justin Simmons' tackle try and charged downfield. Kareem Jackson looked as if he thought Darnold was going to slide — but the quarterback stayed on his feet, faked Jackson and avoided another diving tackle attempt for a 46-yard touchdown that put New York up 7-0.

Darnold, whose run was the longest by a quarterback this season, flipped the ball over his shoulder and his teammates mobbed him.

Late in the first quarter, Darnold tried to avoid the rush and was slammed to the ground onto his right shoulder by Johnson, who didn't let the quarterback get past him this time. Darnold handed off on the next play, then headed to the sideline and into the locker room — as the Jets and their fans watching on TV at home held their breath.

Joe Flacco, in his first game as New York’s backup, took over. Darnold came back early in the second quarter on the Jets' next series — and was promptly sacked again.

Gordon, who also had 1-yard touchdown plunge late in the opening half to give Denver a 17-10 lead, finished with 107 yards on 23 carries. ... Tim Patrick had six catches for 113 yards, including a 6-yard touchdown that put Denver up 24-16 in the third quarter.

Broncos: WR KJ Hamler left with a hamstring injury. TE Noah Fant was carted off with an ankle injury in the third quarter.

Broncos: hit the road again to take on Cam Newton and the New England Patriots on Oct. 11.

Jets: look for their first win when they host Kyler Murray and the Arizona Cardinals on Oct. 11.

By Tom Withers 34 minutes ago
By Dave Campbell 5 hrs ago
By Kyle Hightower an hour ago
By Tom Canavan 2 hrs ago
By Teresa M. Walker 3 hrs ago