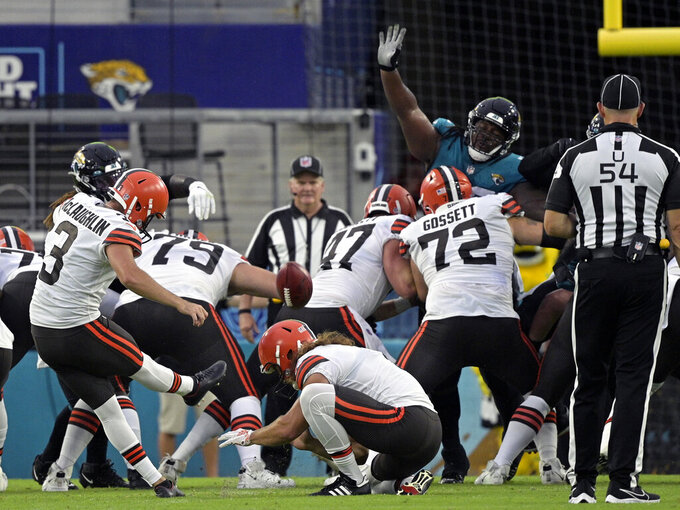 An injury knocked out Cody Parkey.

Parkey was placed on injured reserve Monday with a quadriceps injury, ending his 2020 season and seeming to point to Chase McLaughlin at least beginning the season as Cleveland's kicker.

Parkey, who had a solid season for the Browns in 2020 and is best known for his “double doink” miss for Chicago in the 2018 playoffs, got hurt in Sunday's exhibition win over the New York Giants.

Browns coach Kevin Stefanski wouldn't rule Parkey out for the entire 2021 season, but he will miss significant time and that means McLaughlin wins one of the tightest competitions in Cleveland's training camp by default.

It also signals the Browns will have a new kicker as they embark on a season with high expectations.

Stefanski wouldn't say if the Browns will bring in another kicker to compete with McLaughlin, who does have NFL experience.

The 25-year-old McLaughlin made a 49-yard field goal in the fourth quarter — toward Cleveland's “Dawg Pound” section in Sunday's game and has had the stronger leg in training camp.

“He's battling. He's doing a nice job,” Stefanski said to reporters on a Zoom call. "You guys have seen it out at practice. He did a nice job with that field goal into the Dawg Pound yesterday. He is doing a nice job and expect him to keep battling.”

McLaughlin was claimed on waivers by the Browns in May. He's bounced around the league, spending time with eight other teams. He kicked for Jacksonville and the New York Jets in 2020.

McLaughlin has converted 32 of 38 field-goal tries and 31 of 32 extra points in his career.

While he's looked good kicking this summer, things may get a lot tougher for him later this year at Cleveland's FirstEnergy Stadium, where the notorious wind conditions can wreak havoc on even the best struck balls.

The injury is a tough blow for Parkey, who took over in Week 2 for Cleveland last season when Austin Seibert was released and performed well.

“I am disappointed for Cody, obviously,” Stefanski said. "He's a veteran and came up big for us in some big moments last season so I do not want that to get lost in this either. It is disappointing for him, and I know his teammates feel badly about that.”

Also, Stefanski said cornerback Greedy Williams is day to day with a groin injury and that linebacker Montrel Meander will need surgery after rupturing an Achilles tendon in Sunday's 17-13 win.

NOTES: The Browns trimmed their roster to 80 by placing Parkey, Meander and TE Connor Davis (shoulder) on IR, and waiving WR Alexander Hollins and tackle Alex Taylor, who was let go with an injury designation. ... Stefanski isn't ready to reveal whether he'll play his starters at all in Sunday's preseason finale in Atlanta. It's the final game on the league's exhibition schedule.