Brown's status in question after strong debut with Pats 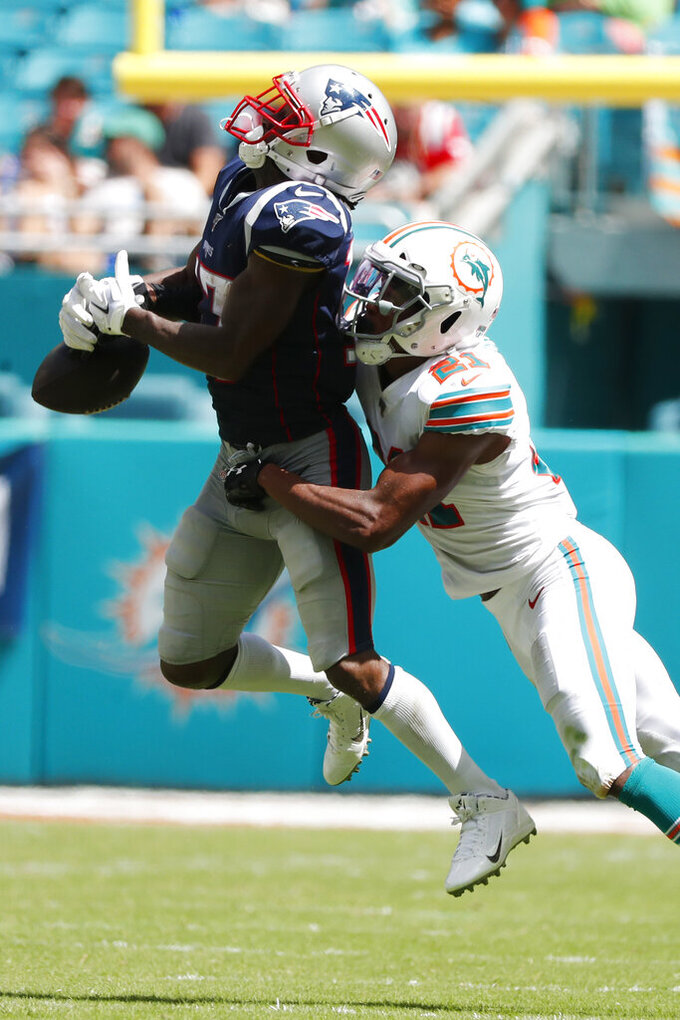 Whether he will have an opportunity for a repeat performance this week will be up to the NFL.

Brown led the Patriots with four catches for 56 yards and a touchdown during New England's 43-0 win over of the Miami Dolphins on Sunday .

Now as the Patriots prepare to host the New York Jets this week, Brown and the team must again wait and see if looming sexual assault and rape allegations against him will make him subject to discipline under the NFL's personal conduct policy.

On Monday, the NFL declined to comment on when it was meeting with Britney Taylor, a former trainer of Brown who filed a civil lawsuit in Florida last week alleging he sexually assaulted her on three occasions between 2017 and 2018. But the league told the Patriots last week that it planned to open an investigation into the matter.

Sports Illustrated also published a story Monday afternoon in which a second woman, an unnamed artist, alleged that Brown exposed himself to her while she was working on a mural for him at his Pittsburgh. Brown also denied those allegations through his attorney.

Brown has yet to address reporters and was not made available following the Patriots' win over the Miami.

Two sources told The Associated Press that Brown was able to play last week because no criminal charges have been filed against him and because the league hadn't fully developed its investigation.

That could change this week if the league has a chance to speak with one or both of his accusers.

Asked during his Monday morning conference call if he expected to hear from the league about Brown's availability this week, coach Bill Belichick said, "I'll just answer any questions about the game, and I'm not getting into anything else outside of that right now."

What is clear is that Brown's presence on the field adds a new dimension to the Patriots' offense.

Several times during its blowout of Miami, the Patriots used four-wide receiver formations with Brown and Josh Gordon lined up outside and Julian Edelman and Phillip Dorsett on the inside. The foursome combined to catch 13 of Tom Brady's 28 completions.

Brown's teammates maintain that the off-field issues that have engulfed Brown haven't been a distraction to him on the field.

"I don't think any of us had any doubts about A.B.'s skillset," Gordon said. "I think it was just good for everybody to see it in an actual game. He continues to be who we expect him to be, and that's a great wide receiver and a good football player."

The offense. Offensive coordinator Josh McDaniels has done a masterful job thus far is mixing up personnel groups and his play calling to take the pressure off his 42-year-old quarterback. The presence of Gordon and now Brown has also helped mask the absence of retired tight end Rob Gronkowski.

Through two games the offense is averaging 6.4 yards per play and has one turnover.

The one caveat to the Patriots' offensive dominance over the first two games is on the offensive line, which continues to fight through injuries. Right tackle Marcus Cannon was active but did not play as recovers from a shoulder injury. Marshall Newsome, who was signed last week, started in Cannon's place.

The line suffered another injury in the first quarter. Left tackle Isaiah Wynn, who was sidelined last season with an Achilles tendon issue, left the game with a foot injury and did not return. He was replaced by Korey Cunningham, acquired in a trade with Arizona late last month.

Sony Michel. The second-year running back isn't showing any drop-off from his rookie season. He had the game's first touchdown and carried 21 times for 85 yards to lead all rushers.

Kicker Stephen Gostkowski had a rough day against the Dolphins, missing a pair of extra points and a 48-yard field goal. It marked only the third time in his career he has missed an extra-point and field goal in the same game.

Wynn was expected to undergo further testing on his foot on Monday.

76 — The Patriots have outscored their opponents 76-3 in their first two games. The 76 points are tied for the most in team history along with the 2007 team. That team finished the season with 589 points, the second most in the Super Bowl era.

The Patriots continue their AFC East schedule with a visit from the Jets. They will get their first look at running back Le'Veon Bell with his new team.