Bucs off to 3-1 start, though there's room for improvement 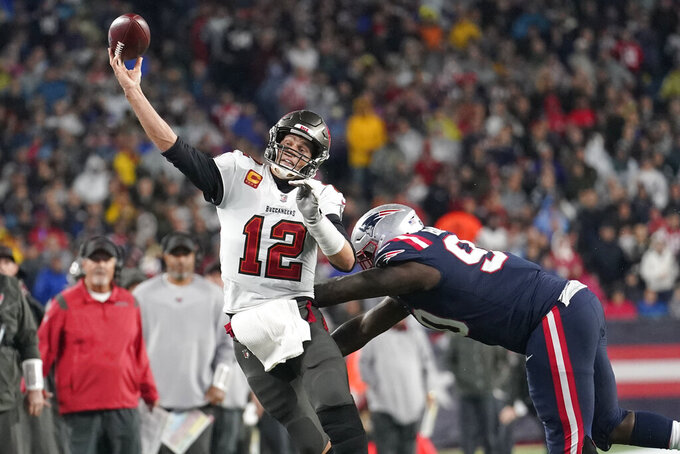 The Tampa Bay Buccaneers are 3-1, though there’s lots of room for improvement after they beat the Patriots in Tom Brady’s much-anticipated return to New England.

Arians says the defending Super Bowl champions have yet to play a complete game. Nevertheless, he feels they are making strides in some key areas, especially on defense.

He doesn’t share the same sentiment about the offense, though, after Brady and Co. struggled to get the ball in the end zone in Sunday night’s 19-17 victory over the Patriots.

“Defensively, we made nice improvement. But offensively, it’s still not clicking on all cylinders like it should be,” Arians said Monday.

“We look really good for a series or two, then we still keep shooting ourselves in the foot with penalties or missed assignments,” the coach added. They’ve got to be corrected. ... We’ve talked about it enough, and it’s on the players.”

Since scoring 79 points in victories over Dallas and Atlanta to begin the season, Tampa Bay has started slowly the past two weeks in a 10-point loss to the Los Angeles Rams and again against New England, which limited one of the league’s highest-scoring teams to four field goals and Ronald Jones II’s rushing touchdown.

After scoring at least 30 points in a franchise-best nine consecutive games, including last season’s Super Bowl, the Bucs have bogged down — particularly in the red zone, where four trips inside the Patriots 20 produced just 16 points.

Brady threw for 269 yards but no touchdowns in his first game against his former team.

While the Bucs have had some issues with pass defense, in part because of mounting injuries in the secondary, Tampa Bay continues to rank among the league’s best in stopping the run after holding New England to minus-1 yard rushing on eight attempts.

“That’s amazing,” Arians said. “He played really, really well. ... The bright side is it’s just going to get better.”

Leonard Fournette rushed for a season-best 91 yards 20 carries as the running game finally showed signs of life. He also had three receptions for 47 yards.

With Fournette and Ronald Jones splitting carries, the Bucs don’t have a clear-cut starter at running back.

Arians said Fournette’s performance against the Patriots, while impressive, hadn’t changed that.

“He was in this game,” the coach said of whether Fournette had established himself as the starter. “We’ll see. It can flip in a heartbeat. Ro was running really hard, too. ... I’ve got all the trust in the world in both of them.”

Arians isn’t happy with a rising number of costly penalties undermining the team, particularly on offense. The Bucs were flagged seven times for 74 yards at New England.

Winfield, who had an interception and forced a fumble, left Sunday night’s game and is in the concussion protocol.

“Getting back so late, it’s going to be hard to get out of the protocol this week probably, just because of the timing, and the trip,” Arians said.

Four, as in the number of times the Bucs sacked Mac Jones. The team had three through the first three games of the season.

The Bucs host the Miami Dolphins (1-3) on Sunday.