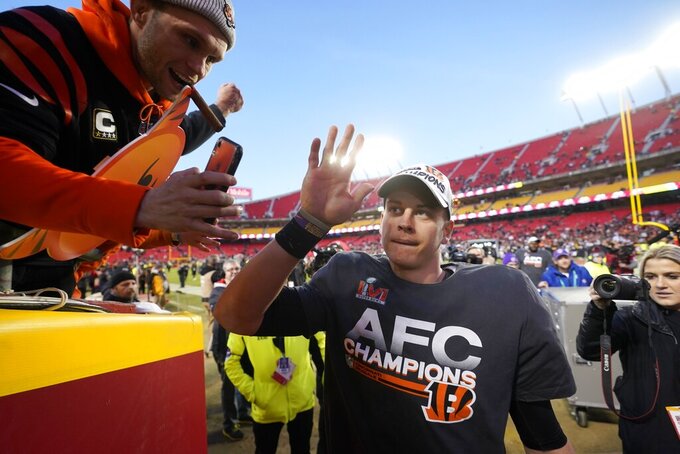 LOS ANGELES (AP) — The key to the Bengals’ latest rebuild that has led them to this most unexpected Super Bowl run starts with one player: Joe Burrow.

The Bengals were coming off an NFL-worst 2-14 season in 2019 and once again in need of serious help. Enter Burrow, the Heisman Trophy-winning quarterback who led LSU to the national championship.

Not surprisingly, Burrow, the top overall draft pick in 2020, had some ups and downs in his rookie season in 2020 before suffering a season-ending knee injury against Washington, and team stumbled to a 4-11-1 record.

Going into the 2021 draft, the Bengals had a significant choice to make with the No. 5 pick. Start to fix the porous offensive line with tackle Penei Sewell or take dynamic wide receiver Ja’Marr Chase, who was Burrow’s teammate at LSU but sat out the 2020 college season due to the COVID-19 pandemic.

By adding Chase, who had 81 catches for 1,455 yards and 13 touchdowns in the regular season, to a group that also included Tee Higgins, a second-round pick in 2020, steady slot man Tyler Boyd as well as running back Joe Mixon (a 2017 second-rounder) gave the Bengals plenty of playmakers to help Burrow.

“I wouldn’t call it surreal, I would say it’s exciting,” Burrow said after beating the Chiefs for the AFC title. “I think if you would have told me before the season that we’d be going to the Super Bowl, I probably would have called you crazy. Then, you know, we play the whole season and nothing surprises me now.”

However, the offensive line remained a mess. Burrow was sacked 51 times in the regular season and nine times in the divisional-round win at Tennessee. The Bengals did use three 2021 draft picks on guard Jackson Carman (second round), guard D’Ante Smith (fourth) and center Trey Hill (sixth), but the line is still a major work in progress. It almost certainly will be addressed again in the offseason regardless of what happens in the Super Bowl against the Los Angeles Rams and their fearsome pass rush.

One other draft pick who was little noticed last spring was Evan McPherson, selected in the fifth round — the only kicker drafted in 2021. McPherson has had a superb season, especially in the playoffs. He is 12 for 12 on field goals in the postseason and hit game-winners on the road to beat the top-seeded Titans and No. 2 seed Chiefs in consecutive weeks.

“He has ice in his veins,” Bengals coach Zac Taylor said of his kicker last week.

With all the rebuilding through the draft the Bengals did on the offense and at kicker, the team has been unexpectedly aggressive in addressing the defense, especially via free agency in the previous two offseasons.

Reader and Waynes were hurt that season and their absences were a major factor in some defensive struggles.

The Bengals also drafted three linebackers in 2020: Logan Wilson (third round), Akeem Davis-Gaither (fourth) and Markus Bailey (seventh) to address another position of immediate need. Wilson had a particularly strong 2021.

And last offseason the Bengals went big into free agency again by signing defensive lineman Trey Hendrickson to a four-year, $60 million deal; cornerback Chidobe Awuzie to a three-year, $21.75 million contract; and cornerback Mike Hilton to a four-year, $24 million deal. The Bengals also acquired lineman B.J. Hill in a trade with the Giants and signed Larry Ogunjobi to a one-year, $6.2 million contract.

Hendrickson led the Bengals with 14 sacks in the regular season and Reader helped shore up the run defense.

“When I showed up, guys were really ready to work. Guys who had been here, they were hungry to win. Coaching staff was hungry to win. We knew we had to make some adjustments and things come with time,” Reader said.

"You just got to learn those things, learn how to win, how to go about the process of winning, curating a routine, being pros. And I think bringing in extra guys the next year and the draft picks they’ve all taken hold of that and the guys who stayed, they pushed through and really survived.”

The free agent signings also provided veteran leadership in addition to the talent upgrade as the team used late interceptions to help clinch wins in all postseason victories in their run to the Super Bowl.

“We’re made for this moment. We never quit,” Bell said after his interception of Patrick Mahomes in overtime of the AFC championship game led to McPherson's winning kick. “Never quit fighting. We’re a resilient group.”