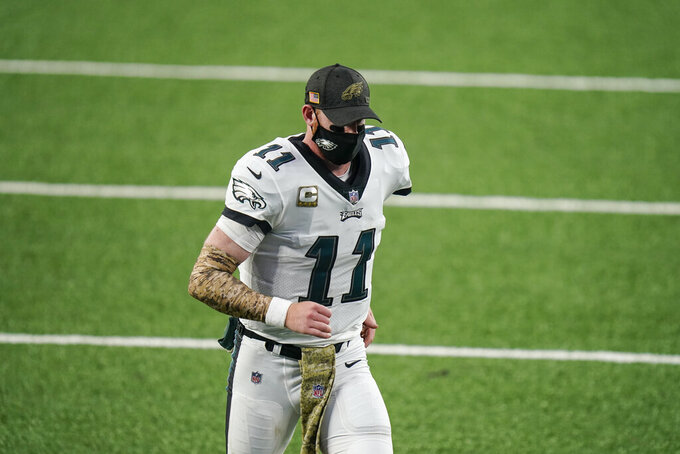 EAST RUTHERFORD, N.J. (AP) — A week off didn’t solve any of Philadelphia’s problems.

The Eagles were out of sync on offense, played poorly on defense and made sloppy mistakes on special teams.

It resulted in a 27-17 loss to the New York Giants on Sunday that tightened the race in the dreadful NFC East.

The Eagles (3-5-1) still lead the division despite a losing record, but the Giants (3-7) moved closer and Philadelphia’s next five games are against teams with winning records.

“It’s irrelevant at this point,” safety Jalen Mills said about the team’s hold on first place. “We haven’t put a full game together.”

Carson Wentz played a turnover-free game, but the offense was stagnant. The Eagles were 0 for 9 on third downs and couldn’t get anything going until the third quarter.

Boston Scott had a 56-yard touchdown run and Corey Clement ran in from the 5 to get Philadelphia within 21-17 but the last four drives netted only 59 yards.

“We’re not where we want to be,” Wentz said. “Personally, I hate losing. It’s frustrating to be where we’re at but we have no choice but to bounce back.”

The return of Miles Sanders and Alshon Jeffery couldn’t help the offense get on track. Sanders had 85 yards rushing, but dropped two passes. Jeffery was only targeted once in his first game since December 2019.

“I saw an offense that just wasn’t disciplined, including myself. We’re beating ourselves,” Sanders said.

The Eagles were hoping to get more help on their offensive line but left guard Isaac Seumalo wasn’t ready to return from a knee injury and guard Nate Herbig didn’t start because of a hand injury. Reserves Sua Opeta and Matt Pryor filled in and New York’s defensive line dominated upfront for much of the game.

“I’m disappointed. It’s on me the way we played,” said coach Doug Pederson, who fell to 1-4 after a bye in the regular season. “All three phases had a hand in this loss. ... It takes everybody. It takes intensity in practice. It takes everybody being on the same page. There’s a work ethic, a pride thing as a team to say ‘enough is enough.’ I know we have been plagued with a lot of injuries but there’s still a lot of pride in that locker room. Guys are mad, I’m mad we lost this game.”

Wentz has been criticized for trying to do too much, forcing throws and turning it over 16 times this season. Playing within the offensive scheme and taking a cautious approach allowed him to have a clean performance but robbed him of his playmaking ability.