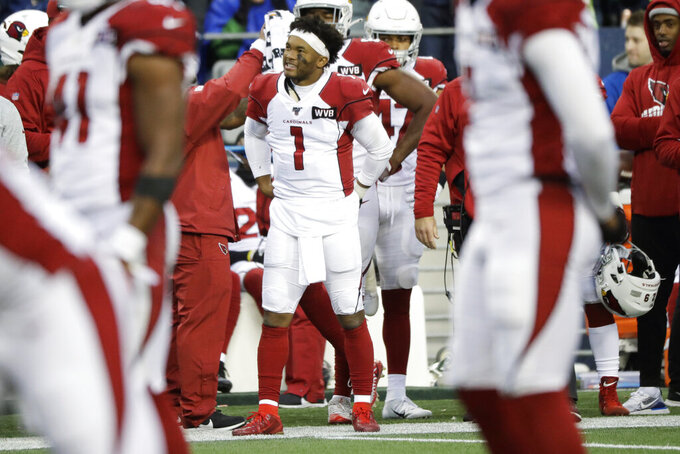 Arizona Cardinals starting quarterback Kyler Murray (1) stands on the sideline after leaving with an injury during the second half of an NFL football game against the Seattle Seahawks, Sunday, Dec. 22, 2019, in Seattle. (AP Photo/Elaine Thompson)

SEATTLE (AP) — The big hits felt by the Seattle Seahawks came only after getting beaten up in another late-season home loss to the Arizona Cardinals.

Seattle (11-4) lost control of its path to a bye in the NFC playoffs after getting dominated in a 27-13 loss to the Cardinals on Sunday. Losing control of a needed bye for a battered team was only the start of the bad news for Seattle.

After the loss, coach Pete Carroll said starting running back Chris Carson is done for the season with a hip injury suffered in the second quarter. His backup C.J. Prosise was injured minutes later with a broken arm that will keep him out for the year.

And to top it off, Carroll said left tackle Duane Brown — who did not play — will undergo minor knee surgery on Monday and will miss at least a couple weeks. That means Seattle's best offensive lineman, along with its top running backs, will all be spectators next week when Seattle plays San Francisco for the NFC West title.

Losing was bad enough. The injuries — capping a week where receiver Josh Gordon and defensive tackle Al Woods were suspended — made this one forgettable Sunday.

“You can take in this loss, feel the way you want to feel toward it, but after that move forward because that team coming in next week don’t care about what happened today,” Seattle linebacker Bobby Wagner said. “They just want to win and want to get a bye. Let this game sink in for a second, move on and be ready for next week.”

Seattle would like that bye as well and entered the week at the No. 1 seed in the NFC thanks to owning a three-team tiebreaker with New Orleans and Green Bay. But the Seahawks failed to keep pace and can guarantee themselves only the No. 3 seed with a win next week if they don't get help.

If Seattle plays like it did Sunday, its playoff seed may not matter because its postseason trip will be short.

“This team is going to come back and fight," right tackle Germain Ifedi said. "This one doesn't feel good. We're not happy with it, we're not making excuses, we're not talking about who didn't play. We had who we had out there and we were more than capable to get the game and we weren't able to match them.”

The absence of Brown and the lack of a run game left Seattle’s offense stuck in neutral. The Seahawks gained 89 yards on their opening drive that was capped by Russell Wilson’s 3-yard TD pass to Nick Bellore. They gained 49 total yards combined in the second and third quarters. Between the six-minute mark of the first quarter and Tyler Lockett’s 12-yard catch early in the fourth quarter, Seattle had one first down.

Wilson finished 16 of 31 for 169 yards, but was sacked five times — four by Chandler Jones, who also forced a key fumble early in the second half.

On top of the major injuries, Seattle is also unsure of the status of safety Quandre Diggs, cornerback Shaquill Griffin and defensive end Jadeveon Clowney, all of whom missed Sunday's loss.

And all of them could have helped after watching Kenyan Drake rush for 166 yards and two touchdowns and Larry Fitzgerald add a 21-yard TD reception in the first half. Arizona won in Seattle for the fifth time in the past seven seasons — four of them coming in December.

Drake had an 80-yard TD run in the first quarter and provided the capper with a 3-yard TD with 4:18 remaining to take a 27-13 lead. Drake’s 166 yards were a season high against Seattle.

“This is our home away from home,” Arizona cornerback Patrick Peterson said. “The atmosphere here is always a playoff atmosphere. The fans are always into the game. The DJ is always rolling. There's nothing like coming to CenturyLink and winning.”

Murray was 11 of 18 for 118 yards and a touchdown before leaving. He also added 40 yards rushing. His best play was the touchdown to Fitzgerald that gave the Cardinals a 14-7 lead. Murray scrambled from the pocket, stopped before the line of scrimmage and flipped a short pass. Fitzgerald managed to corral the pass with one hand, then ran through Seattle’s K.J. Wright near the goal line for the touchdown.

Brett Hundley took over for Murray and the backup QB in Seattle last year led Arizona on a key scoring drive midway through the fourth quarter — including a key 14-yard run on third-and-2 —- and was capped by Drake’s second touchdown run.

“There is nothing we can do about this thing. There were so many thing that just weren't right for us today,” Carroll said.

Jones set a single-season franchise record for sacks. Jones has 19 on the season, topping the 17 he had in 2017. Jones now has 60 sacks in 63 career games since joining the Cardinals.

Wilson moved past Matt Hasselback to become Seattle’s career leader in yards passing. Wilson needed 103 yards to top Hasselback’s mark of 29,435 set during his 10 seasons with Seattle between 2001-10.

As expected, Seattle’s Week 17 matchup against San Francisco was flexed by the NFL to be the Sunday night game. It will be the second time Seattle has hosted the final game of the regular season with the NFC West title on the line. The previous time came in Carroll’s first season when Seattle beat St. Louis 16-6 to win the NFC West.

Cardinals: travel to Los Angeles to face the Rams.

Seahawks: Seattle hosts San Francisco. Both already are in the playoffs.