Carlos Hyde knows role in Seattle could be as No. 2 option 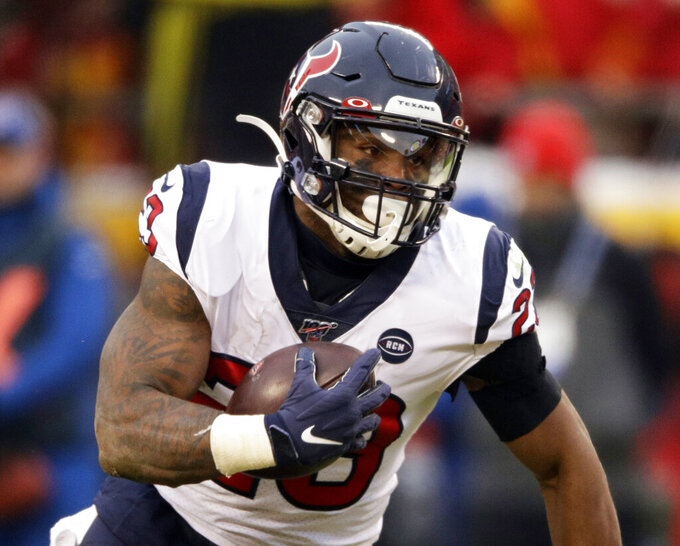 FILE - In this Jan. 12, 2020, file photo, Houston Texans running back Carlos Hyde carries the ball during the first half of an NFL divisional playoff football game against the Kansas City Chiefs in Kansas City, Mo. Hyde has admired the Seattle Seahawks from afar for a while. So it made sense he would jump at the chance to sign with Seattle this offseason and build the depth in the Seahawks backfield. (AP Photo/Charlie Riedel)

RENTON, Wash. (AP) — When he was an opponent playing in the same division, Carlos Hyde admired the way the Seattle Seahawks operated from afar.

Of course he would. He’s a running back and very few teams, if any, run the ball as much as the Seahawks.

“It’s been a place that I’ve always wanted to play ever since I left San Francisco," Hyde said. "Going against those guys for four years during my time in San Fran, just seeing how they always ran a ball all the way back to when Marshawn (Lynch) was there.”

Hyde got his wish when he recently signed a one-year deal with Seattle coming off the best season of his career. But even after rushing for more than 1,000 yards last year with Houston and playing through a shoulder injury that required offseason surgery, Hyde is fully aware he very likely won’t be the starter with the Seahawks.

Hyde freely acknowledged during a video conference Monday that Chris Carson is Seattle’s starter, though Hyde intends to compete for as many carries as possible, Since it's the Seahawks, that likely still means a hefty amount of carries.

“It’s probably open competition for that second role,” Hyde said. “Me, personally, I don’t think there is an open competition for the starting role. I think everybody knows who the starting running back is for Seattle and that’s Carson. I knew that even before signing to Seattle that he was the guy. Will coach (Pete) Carroll change his mind? Maybe. I don’t really know.”

Adding a veteran running back was high on Seattle’s priority list because of the uncertainty surrounding former first-round pick Rashaad Penny, who tore an ACL in December and is likely to start the season on the physically unable to perform list as he continues to rehabilitate the injury.

Hyde rushed for 1,070 yards and six touchdowns last season with Houston. He had come close to the 1,000-yard mark twice in his four seasons with San Francisco, but never quite reached it. His year with the Texans helped reestablish Hyde after a lackluster 2018 when he split the season between Cleveland and Jacksonville.

Hyde said he should be fully recovered from his shoulder surgery by the time the regular season begins. He said the combination of the surgery and the COVID-19 pandemic seemed to stagnate his market this offseason.

“I feel good now," he said. "My shoulder has gotten a lot stronger than what it was feeling before I got the surgery.”