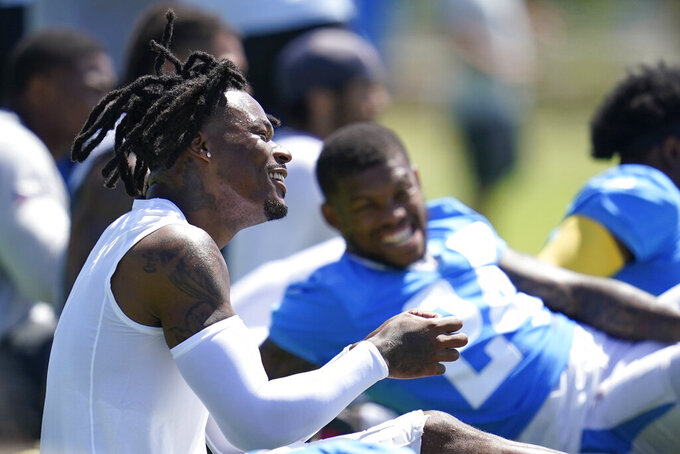 COSTA MESA, Calif. (AP) — Los Angeles Chargers fans on Wednesday finally got to see what they had been hoping for three weeks into training camp — a smiling Derwin James running out to the field in his powder blue practice jersey, helmets and shoulder pads.

James took part in his first practice after signing a four-year, $76.5 million contract extension, making him the NFL's highest-paid safety.

“This wasn’t like every other big contract that gets signed, because you know what he had to go through in order to make it to this point in his career," coach Brandon Staley said. "He overcame a lot to earn this contract, and he earned every cent of it. He was a big, big leader for us today out there.”

The deal includes $42 million in guaranteed salary. James did not participate in the first three weeks of practice and took part only in walkthroughs as the two sides worked on an extension.

“I’m feeling amazing,” said James after the Chargers completed the first day of joint practices with the Dallas Cowboys. There was never a doubt in my mind (the deal would get done). I just tried to do what I could as a player to come out here every day and get better in the ways that I could.”

James took part in individual drills but none of the 7-on-7 or full-team drills against the Cowboys. Staley said James wouldn't take part in team work until next week.

The Chargers have spent nearly $112 million in guaranteed salaries since the end of last season to improve a defense that was 23rd overall and near the bottom in key categories, including run defense, third down conversions and points allowed after halftime.

James — the defensive signal-caller in the huddle — will be counted on as the leader of a unit that made significant upgrades over the offseason. Los Angeles signed cornerback J.C. Jackson, defensive linemen Sebastian Jones-Day, Austin Johnson and Morgan Fox and edge rusher Kyle Van Noy, along with trading for linebacker Khalil Mack.

Staley on Tuesday stressed the importance of James, saying he is more than a safety and is a complete defensive back. Staley also called James “the heartbeat of our defense.”

James said he took those comments to heart.

“That’s a privilege to me for people to be able to think of you like that. I feel like that carries a lot of weight and just have to keep getting better and not be satisfied with it. Don’t get arrogant, just keep working and staying humble,” James said.

James — the 17th overall pick in the 2018 draft — didn’t participate in full-speed drills during the offseason program after having shoulder surgery once last season ended. He is cleared to go now that the contract issues are resolved.

James was an All-Pro selection as a rookie before being derailed the next two seasons because of injuries during training camp. A broken foot limited him to five games in 2019, and he suffered a season-ending knee injury in 2020.

Last season James bounced back and reclaimed his spot as one of the top safeties in the league. He was the eighth defensive player and first defensive back since 2000 to have more than 100 tackles (118) after being sidelined the previous year.

James also had two interceptions, a pair of sacks and three forced fumbles. He wore No. 33 his first four seasons before switching to No. 3, which he wore during high school and college.

The nearly two-hour practice between the Cowboys and Chargers was even-keeled, without any scuffles.

Cowboys linebacker Micah Parsons said he was pleased with the session.

“I think today, we came out and really competed hard, especially made big strides from last week. ... And I just felt like the energy was there, and that’s kind of like the standard we need to play with every game this year,” he said.

Chargers running back Austin Ekeler said it was good to come out against another team and see other looks.

“There’s a lot of learning. We didn’t know what they were going to come out in and they showed us some looks today, defensively, that we weren’t really prepared for. We were kind of figuring it out on the fly,” he said.

"That’s where you really see the true value in your team and how you can actually react and play under stress and under times where it’s not going your way and things aren’t maybe as planned out.”