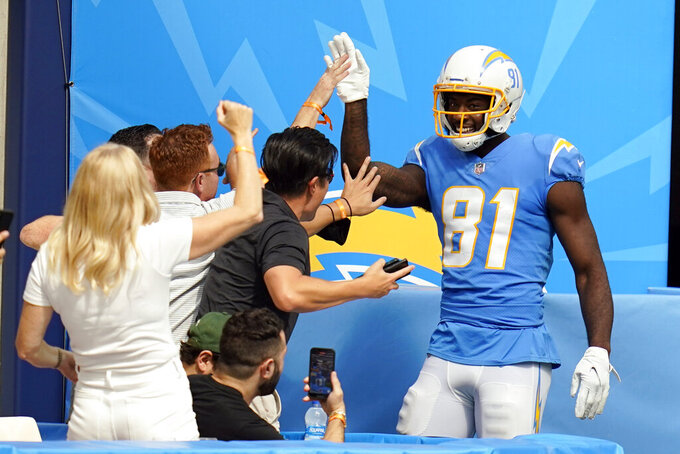 COSTA MESA, Calif. (AP) — Wide receiver Mike Williams is questionable for the Los Angeles Chargers' key AFC matchup against the Baltimore Ravens on Sunday due to a knee injury.

Coach Brandon Staley said Williams' knee had some swelling after last Sunday's 47-42 win over the Cleveland Browns. Williams, who had a career-high 165 yards on eight receptions and two touchdowns in that game, did not practice all week, but Staley said he is hoping Williams' status becomes more clear before the team leaves for Baltimore on Saturday.

“We just tried to be careful with him this week at the beginning of the week, make sure that he’s feeling his best for Sunday,” Staley said.

Williams is fifth in the league in receiving yards (571) and tied for eighth in receptions with 31. With Keenan Allen's 34 catches, the Chargers are the only team in the NFL to have two receivers with 31 receptions or more.

If Williams is unable to play, Jalen Guyton could get the start, with rookie Joshua Palmer seeing additional playing time.

Linebacker Drue Tranquill is out due to a pectoral injury, while safety Nasir Adderley (hip) is questionable.

Both teams come into the game 4-1 and are leading their respective divisions. The Ravens ruled out receiver Sammy Watkins (thigh) and tackle Ronnie Stanley (ankle).