Chiefs on brink of No. 1 seed with Falcons coming to town 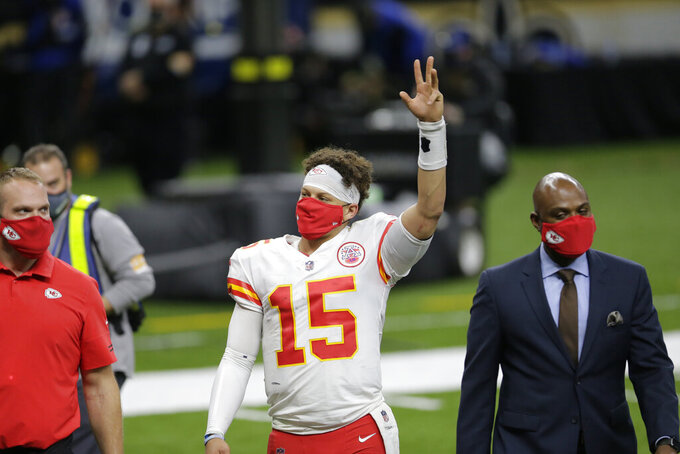 KANSAS CITY, Mo. (AP) — The Kansas City Chiefs have reached the precipice of the No. 1 seed in the AFC and a coveted first-round bye with a nine-game winning streak that includes some heavy hitters with Super Bowl aspirations of their own.

The Bills and the Bucs. The Saints and the 'Fins.

So while records alone suggest the Chiefs finally get a breather to finish off the regular season, facing the losing Falcons and the Chargers next week — both at Arrowhead Stadium — both Kansas City coach Andy Reid and Atlanta counterpart Raheem Morris are in agreement that Sunday's game could be far tighter than the more-than-10-point spread.

“We have to maximize ourselves against a team that's playing hard," Reid said. "These games they've lost, over half of them have been in the fourth quarter. They're taking teams right to the end there.”

Besides, the Chiefs (13-1) tend to play everyone down to the wire. They're the first team in NFL history to win six straight one-score games, blowing big leads in some of them, rallying in others and going toe-to-toe in the rest.

The Falcons (4-8), meanwhile, have generally been on the short end of those games.

They lost by a point to the Cowboys and Lions. By a field goal to the Chargers. All told, seven of their 10 losses have been by a single possession, and the remaining three came against division leaders Green Bay, Seattle and New Orleans.

“Yes, we made some mistakes from a coaches’ standpoint and a players’ standpoint,” Morris continued, “but I don’t think anybody is pointing fingers at each other. I don’t think you’d point blame. Last week, we talked about that a little bit. We talked about blaming Matt Ryan and some of those type of things. We just don’t do that as a team. We go in each week and try to figure out what’s necessary to do to try to get a win. I think the guys really do a nice job of resetting."

The easiest way for the Chiefs to get the No. 1 seed is a win. But they also can clinch if Pittsburgh loses or ties, Buffalo loses, or if they clinch the strength-of-victory tiebreaker over one of those teams and tie the other.

“It's a lot of pressure. A lot of different teams are trying to get that No. 1 seed,” Chiefs safety Tyrann Mathieu said. “We have a pretty good football team coming in here, an offense that's pretty explosive. That's all I'm focused on, the Falcons, and how we can beat the Chargers.”

The Chiefs lost rookie running back Clyde Edwards-Helaire for the rest of the regular season after he hurt his hip last week in New Orleans. That means Le'Veon Bell, who also got banged up against the Saints, is poised to take on the majority of snaps against the league's 28th-ranked run defense.

SEE ME IN ST. LOUIS

Falcons linebacker Foye Oluokun, a native of St. Louis, was a Rams fan before the team moved from his hometown to Los Angeles. Many of his friends soon began to root for the Chiefs after the Rams' departure, and he hopes to have his father and a few others among the limited capacity at Arrowhead Stadium on Sunday.

“The Rams’ owners kind of disrespected our fan base," Oluokon said, “so a lot of people didn’t stay Rams fans."

Ito Smith has replaced Todd Gurley as the Falcons' lead running back after leading the way with 24 yards in last week's loss to Tampa Bay. Gurley lost a yard on his only carry, and despite leading the team with 644 yards rushing and nine TDs after signing a $5.5 million contract, it appears his time is nearly over in Atlanta

“Ito, right now, is our lead dog,” Morris said. “Todd is going to have his role as a protector for us.”

The Falcons could be headed toward a roster makeover, and that means an uncertain future for players and coaches. Morris hopes to be considered for the full-time job, but that isn't something he appears to be concerned about.

“I’ve been in the 1-0 mentality, but yesterday our social justice committee had a quote up on the board that was kind of fitting,” Morris said. “It said, ‘I don’t know what the future holds, but I do know who holds the future.’"