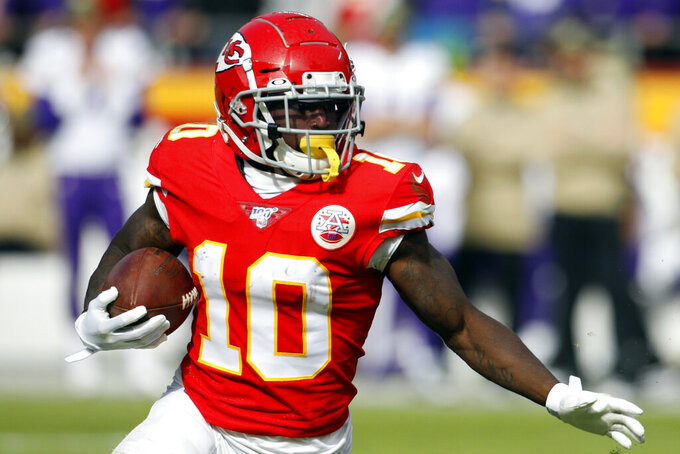 FILE - In this Sunday, Nov. 3, 2019, file photo, Kansas City Chiefs wide receiver Tyreek Hill (10) carries the ball during the first half of an NFL football game against the Minnesota Vikings in Kansas City, Mo. It would be an understatement to the greatest degree to say that Chiefs wide receiver has had an eventful year, one marked by the highest of highs and the lowest of lows. Now, he’s hoping to return from a hamstring injury in time to help Kansas City win a fourth consecutive AFC West championship.(AP Photo/Colin E. Braley, File)

KANSAS CITY, Mo. (AP) — It would be an understatement to say that Chiefs wide receiver Tyreek Hill has had an eventful year, one marked by the highest of highs and the lowest of lows.

It began with Hill wrapping up a record-setting season by helping the Chiefs to the AFC title game, a year of performances that earned him a Pro Bowl trip and an All-Pro nod. It then spiraled downhill when Hill was accused by his ex-fiance of a domestic violence incident involving their young son.

He was suspended and became a pariah. He was absolved and returned with fanfare.

Then, Hill welcomed the start of the season by signing a $54 million, three-year contract extension, only to break his collarbone in the opener against Jacksonville. He returned for a solid stretch of games but hurt his hamstring against the Chargers a couple of weeks ago in Mexico.

Up and down. Down and up.

Forgive him for having a bit of nausea after such a roller coaster ride.

There is little doubt that Hill is a polarizing player.

He was kicked off the team at Oklahoma State for a domestic violence incident and was not exactly welcomed in Kansas City with open arms. There is still a large segment of fans that refuse to cheer for him, and the reality is there may be nothing he can do that changes their minds.

Yet for the vast majority of Chiefs fans, the 25-year-old wide receiver has become the biggest star on their favorite team. He makes magic happen with fluid moves, breathtaking speed and an uncanny ability to make defenders look helpless whenever he has the ball in his hands.

In his first game back from the collarbone injury, Hill caught five passes for 80 yards and a pair of touchdowns against Houston. He had a TD catch against Denver, grabbed six passes for 140 yards and a score against Minnesota and had his best game of the season in Mexico City.

“Man, he’s a unique guy. There’s not many guys like him,” said backup quarterback Matt Moore, who learned just how valuable Hill can be when Mahomes was sidelined by a knee injury. “I’ve played with some good ones, but he’s different. To have him and know he can track down any ball and use his speed and talents to get open the way he does, it’s a nice feeling knowing you have him out there.”

For the Chiefs. It’s a downright queasy feeling for opponents.

That feeling doesn’t just reside on offense, either. The Chiefs limit the amount they use Hill on special teams in part to keep him fresh, but they trotted him out to return a pair of crucial punts late in their game against Minnesota. His mere presence led to a couple of altered kicks that gave the Chiefs some much-needed field position ahead of Harrison Butker’s game-winning field goal.

“Britton (Colquitt) had a nice punt on the first one where we had Tyreek in there. He had a 40-yard net because he got it out of bounds,” Chiefs special teams coach Dave Toub said. “He tried to do the same thing on the second one, but he mishit it. Tried to kick it out of bounds, and he ended up with a 25-yard punt, or whatever it was. Gave us great field position and we got what we wanted on that play.

“If they kick it to him,” Toub said, “now he can get a touchdown. Pick your poison.”

The only thing that seems to slow Hill down are the injuries.

He hobbled off the field in Azteca Stadium before he could do much against the Chargers, and while Andy Reid said Hill lobbied to return, the Chiefs’ coach played it safe. The Chiefs had a bye week ahead of them, and there was no use in rushing him back to the field with more important games to come.

“I’m optimistic,” Reid said. “I know he loves to play the game and I think he’s been with (trainer) Rick Burkholder a bit this past week. ... He’ll get out and move around a bit and we’ll see.”