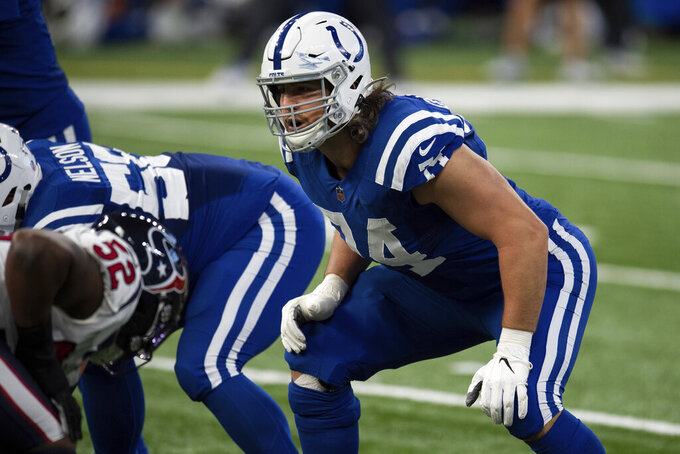 FILE - Indianapolis Colts tackle Anthony Castonzo (74) gets ready for the snap during an NFL football game against the Houston Texans in Indianapolis, in this Sunday, Dec. 20, 2020, file photo. If the Colts pass on taking a left tackle or pass rusher with their first pick at the NFL Draft, it could be because they have additional options. The Colts have debated plugging three-time All-Pro Quenton Nelson into Anthony Castonzo's old spot at tackle. (AP Photo/Zach Bolinger, File)

It may take a while longer to see how second-round pick Dayo Odeyingbo fits in.

Ballard used the 54th overall selection, his only pick Friday in the NFL draft, on the talented 6-foot-5, 285-pound defensive lineman from Vanderbilt who tore his Achilles tendon in January. The injury could keep him off the field for months.

“I did it training for the Senior Bowl, just kind of like a freak accident,” Odeyingbo said on a video call. “I’m on the road to recovery. I’m three months in and trying to work my way back as soon as possible. It (the recovery) varies by individual, so I can’t really give you a hard date (for a return) right now.”

Ballard didn't say when he'd return, either, though he called the selection worth the risk.

There was little doubt about what a healthy Odeyingbo would bring to the NFL. He possesses the size and length scouts covet on the defensive line and his aggressive playing style could make him effective as either inside or outside. He played defensive end and defensive tackle in college and his versatility is a trait Ballard has valued during his first drafts with Indy.

Odeyingbo was productive, too.

The three-year starter finished his career with 125 tackles, 31 for loss, 12 sacks, 22 quarterback pressures and one interception. He ranks fifth in school history in tackles for loss and after leading the team in that category (eight) and recording 5 1/2 sacks in eight games last season, Odeyingbo was a second-team All-SEC selection.

“He’s as disruptive a defensive player as we saw on tape this fall," Ballard said. “This kid is a unique, unique talent. We would have considered him in the first round if he hadn’t got injured, and I think a lot of teams would have. To be honest with you, I was kind of sweating it out whether we would get him because I know some teams behind us wanted him."

Odeyingbo’s injury almost certainly hurt his stock on some draft boards. Not Ballard’s.

The decision came less than 24 hours after Ballard selected another pass rusher with his first pick in the draft, Kwity Paye. The 6-foot-3, 261-pound former Michigan star was expected to go in the top 20 and Ballard didn’t trade out of the spot, as he had each of the previous three seasons.

“It was really easy because his energy, you always look for guys who pop off the tape and Kwity pops off the tape with his athleticism and speed but also with his effort," Ballard said. “He already plays the way we want to play. I know our defensive players are really excited, I heard from a few of them already."

The bigger surprise may have been that Ballard, for the second time in two days, opted not to select an offensive lineman to fill Indy’s other glaring need. Longtime left tackle Anthony Castonzo retired in January. Indy signed free agents Sam Tevi and Julién Davenport to compete for the job and it’s still possible three-time All-Pro left guard Quenton Nelson could move outside.

“Right now, we would probably leave the four (offensive line) guys alone," Ballard said. “They’ve all produced at a really high level and then we’ll work from there."

NEXT UP: The Colts traded their third-round slot to Philadelphia in exchange for new starting quarterback Carson Wentz. Indy begins the final day of draft weekend with four more picks and could add an offensive lineman Saturday.