Colts buried under avalanche of turnovers in blowout loss 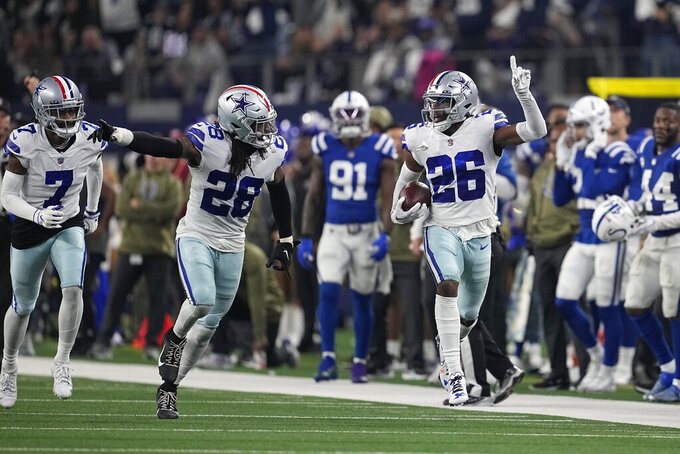 Dallas Cowboys' DaRon Bland (26) reacts after an interception during the second half of an NFL football game against the Indianapolis Colts, Sunday, Dec. 4, 2022, in Arlington, Texas. (AP Photo/Tony Gutierrez) 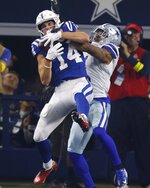 ARLINGTON, Texas (AP) — The biggest of four turnovers from Matt Ryan came late in the second quarter, setting up a Dallas touchdown when the Indianapolis quarterback had a chance to put the Colts back in front.

His giveaways in the fourth quarter were more about making history for the Cowboys than losing the game for the fading Colts, who have allowed an NFL-high 26 turnovers.

“If you have 30 turnovers in a season, it's just so costly,” receiver Parris Campbell said. “Obviously, the record speaks for itself. That was just unacceptable.”

Ryan had two touchdown passes when the game was still close, but finished Sunday night as the league's individual leader in giveaways in a 54-19 loss to Dallas.

The Cowboys scored 33 points in the fourth quarter, becoming just the third team in NFL history to score at least that many in the fourth. It was Dallas' highest-scoring quarter since at least 1991.

Ryan's first interception was on a tipped pass to former Indy first-round pick Malik Hooker. Dak Prescott followed with a 13-yard touchdown pass to Michael Gallup for a 21-13 halftime lead for the Cowboys.

The first of four Indy turnovers in the fourth quarter wasn't Ryan's fault. Tight end Mo Alie-Cox lost the ball after a catch, and Hooker scooped it up and ran untouched 38 yards down the right sideline for a 34-19 lead.

Then it was Ryan's turn for turnovers, and by the time it was over, the 37-year-old was up to an NFL-high 18 giveaways — three more than second-place Buffalo quarterback Josh Allen.

The season-high five giveaways left Indy tied with New Orleans for the worst turnover margin at minus-14. Prescott had one interception for Dallas to go with three TD passes.

“When the offense turns the ball over, it's a collective,” said Campbell, who had four catches for 43 yards while the scoring plays came from Alec Pierce and Ashton Dulin. “You can't blame one guy.”

Ryan led the Colts (4-8-1) to a victory in interim coach Jeff Saturday's debut, but they've since lost three in a row under Indy's two-time All-Pro center, who replaced the fired Frank Reich.

Hooker had four injury-plagued seasons with the Colts but didn't get the fifth-year option picked up on his rookie contract after getting drafted 15th overall in 2017. He signed with Dallas during training camp last year.

“I didn’t really have no special words, man,” Hooker said when asked what his message was for the team after being named one of the captains for the game. “The message from me today, was ‘if you’re a big dog, be a big dog today,’ and I feel like that showed up today.”

The Colts are headed into their open week before they have to play another strong NFC playoff contender on the road with a visit to Minnesota.

A team that opened with high expectations under Ryan and Reich is a loss away from being guaranteed its third sub-.500 record in the past six seasons.

“We've got four games left," Campbell said. “Are we going to lay down for every single opponent, or are you going to respond? What are we made of? How can we respond?”