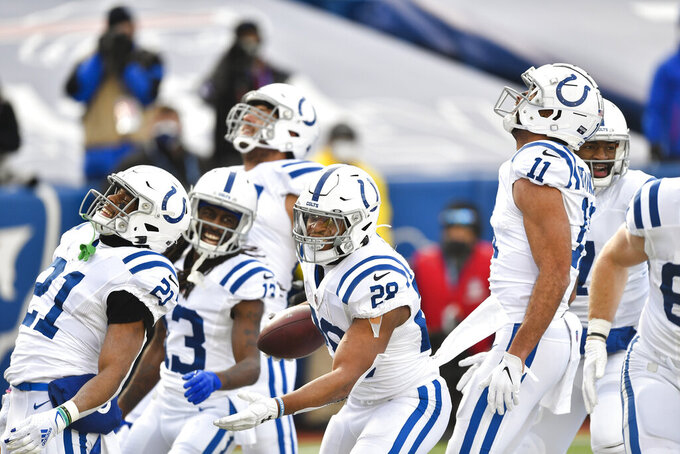 Indianapolis Colts running back Jonathan Taylor (28) celebrates with teammates after scoring a touchdown during the first half of an NFL wild-card playoff football game against the Buffalo Bills Saturday, Jan. 9, 2021, in Orchard Park, N.Y. (AP Photo/Adrian Kraus)

Back in Bills Stadium for the playoffs some 28 years after the former backup quarterback rallied Buffalo to overcome the largest deficit in NFL history, Reich could only watch as Indianapolis fell short in a 27-24 wild-card playoff loss on Saturday.

“It’s very hard to stomach,” Reich said. “When you get in the playoffs and you have a good team and you know you can do it — I know we have a team to go all the way. We had chances. We just didn’t get it done.”

After squandering scoring opportunities through three quarters, the Colts finally mustered a response when trailing 24-10. Rivers engineered consecutive touchdown drives over a six-minute span before coming up empty on the Colts' final possession.

The game ended with Rivers throwing three consecutive incompletions, including a 47-yard desperation pass intended for T.Y. Hilton that was batted down by safety Micah Hyde with no time remaining.

For Reich, it happened in the same setting in which he stepped in for injured Hall of Fame QB Jim Kelly and helped the Bills rally from a 35-3 third-quarter deficit for a 41-38 overtime win against the Houston Oilers in a game known simply as “The Comeback.”

A week after the Colts (11-6) were thanking the AFC East champion Bills for beating Miami in helping them clinch the AFC’s seventh and final playoff spot, Indianapolis players were left blaming themselves for not taking advantage of the opportunities.

The offense lacked finish in managing 24 points in a game the Colts crossed midfield on all nine possessions, converted 9 of 17 third-down chances and owned a healthy eight-minute edge in time of possession.

Indianapolis also failed to score on four chances from inside Buffalo’s 4 in the final two minutes of the second quarter. Up 10-7 and facing fourth-and-goal from the 4 after running back Jonathan Taylor was brought down for a 3-yard loss, Rivers lobbed a pass into the left side of the end zone that went off the fingers of diving receiver Michael Pittman.

The Bills responded with a 10-play, 96-yard touchdown drive, which Josh Allen capped with a 5-yard run to provide Buffalo a lead it wouldn’t relinquish.

“You have a chance to go up 17-7 at their place, on the road, and didn’t get it done,” Rivers said. “We kept fighting and lost by three points. We didn’t pull in here today expecting it to be over, that’s for sure. It’s tough.”

Rivers finished 27 of 46 for 309 yards and two touchdowns, but his postseason record dropped to 5-7 at a time the 39-year-old is pondering retirement. The closest he’s come to reaching the Super Bowl was 2008, when the Chargers lost 21-12 to New England in the AFC championship game.

“It’s always emotional,” Rivers said of a season ending with a loss. “But is it more emotional when you’re about to be 40 and you’re not sure if you’ve been in your last huddle? Heck yeah.”

Reich made a pitch for Rivers to return after completing his one-year contract.

“He exceeded expectations on what he brought to the team this year on and off the field,” Reich said.

It wasn’t just the Colts' offense that sputtered at critical junctures.

The most glaring miscue for the defense came three plays before Allen scored. With Buffalo facing fourth-and-3 at the Indianapolis 26, defensive end Kemoko Turay jumped offside to extend the drive.

And the Colts' special teams could shoulder some blame. Though Rigoberto Sanchez landed both punts inside the Bills 20, rookie kicker Rodrigo Blankenship missed a 33-yard field goal attempt on which the ball bounced off the right upright with the Colts trailing 17-10 in the third quarter.

“All around, it felt like we just kept shooting ourselves in the foot,” All-Pro defensive end DeForest Buckner said. “We just let it slip between our fingers.”